It's the biggest Secret Cinema production to date, taking over a secret outdoor location in London for a festival-style array of live music, storytelling and heady romance. With bands, choirs, performers and audiences of 5,000 people coming together for the revelry, it’s an epic experience.

Instead of Shakespeare's fair Verona, we are transported to Luhrmann's vibrant Verona Beach, with its blazing sun and feuding gangs. Capulets are clad in black and red, with plenty of riffs on angel wings and devil horns. The Montagues are a medley of 90s-tastic baby blue and pink, with Hawaiian shirts a-plenty. 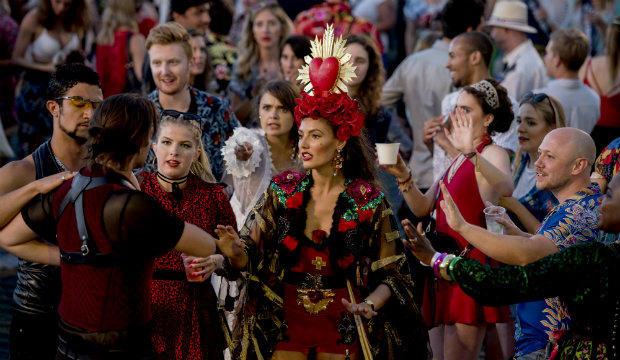 Food trucks, bars and the (top secret) movie set backdrops take over an entire outdoor space. Everywhere you look, there are playful references to Shakespeare via big-brand Americana. You could easily spend the whole time just soaking up the atmosphere, reading billboards and spotting puns.

But you’ll soon be swept up into the narrative, as performers breathe life into the warring tribes and budding romances. Instead of a singular narrative, you’re surrounded by snippets and lured into evocative spaces straight out of Luhrmann's imagination. Together they honour the exuberance and volatility at the heart of Shakespeare’s most famous love story.

After the blockbuster impact of previous projects, including Shawshank Redemption, Moulin Rouge and Blade Runner, Secret Cinema have pioneered a new fusion of immersive performance and film. Secret Cinema presents William Shakespeare’s Romeo and Juliet is the biggest, most ambitious project so far. We had worried that the vast scale and larger audience numbers would detract from the intimacy and immersive impact – but there are plenty of clandestine moments and subplots to get involved with.

And the sheer spectacle of all the people – guests, actors, Montagues, Capulets – works to intensify the sensation of pausing normal life to inhabit a thrilling fictional world of rivalry and romance.