5 CW readers are interested
Takis, Tate Modern review 4 Takis, Tate Modern review Kristina Foster
Walking through this exhibition feels like walking through the laboratory of a madcap inventor. The galleries are full of buzzing machines, blinking lights and vibrating strings; strange noises emanate from these creations, built from salvaged aeroplane parts or items found at military surplus and bric-a-brac stores. The central theme here is magnets and Takis uses them to make iron nails hover as though halted in mid-flight, or to encourage large spheres to swing and smaller shapes to dance on the end of strings.

This exhibition celebrates the extraordinary 70-year (and counting) career of Panayiotis Vassilakis, also known as Takis. Takis was born in Athens in 1925 and became somewhat of a star among the avant-garde circles in Paris and New York. He earned the admiration of the Beat poets (he suspended one in mid air using presumably very strong magnets) and Marcel Duchamp was also a fan. But Takis began his career as a figurative sculptor.

A few of his early works are here; two wrought iron outlines of human torsos form a striking pair. But in 1959, after a move to Paris, he took the leap into a new kind of abstraction, a gravity-defying, kinetic kind. This shift came just as the space race was really heating up; Yuri Gagarin completed the first orbit of the Earth in 1961 and cosmic forces were on the artist's mind. By the mid-sixties he had started to make what he called ‘space sounds’, using magnets to pull metal rods against piano strings. One room in this exhibition has a whole ensemble of these large instruments, lined up along a wall. The are on a timer, and when switched on produce an eerie clamour. Takis was hoping, we are told by the curator, to emulate the noises of the cosmos. 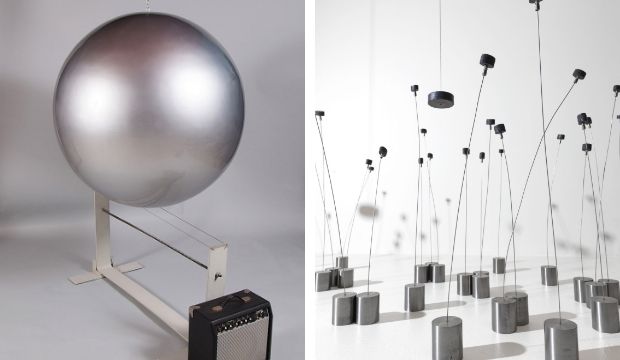 Lights, too, have held a special fascination for the Greek artist. In a darkened corner of the exhibition aeroplane lights blink on and off from the top of long antennae, made, we are told, after Takis felt that he was surrounded by ‘monster eyes’ in an ‘jungle of iron’ while waiting for a train in Calais. Nearby, a panel of dials taken from an aeroplane cockpit flash in rhythmic patterns. These lights were designed to indicate the invisible forces acting on the aircraft and with some tweaking blink in a sort of illuminated dance. Takis made Black Panel Dials in 1968 and at the same time was calling for revolutionaries and scientists to devise ‘anti-tech’ to disrupt the invasive technologies used by governments and the mass media.

The last room of this exhibition is the most visually arresting, containing a forest of spidery antenna crowned with fragments of exploded bombs. They are elegant structures that do not hide their components and seem like the art of a future civilisation, made from the fragments of our current age. At the end of the room several large spheres suspended from the ceiling swing gently and on the far wall sits a large gong that needs the help of museum staff to ring out.

Takis is not well-known in the UK, despite his success in Europe, but this exhibition will hopefully change all that and stir some imaginations. But even if the artworks here doesn't make you think about the future, the playful ingenuity behind them will surely impress. 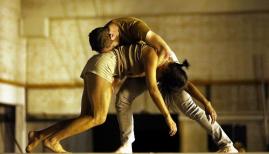