The Scottish born, Canadian raised painter splits his time between his studios in New York and Trinidad and over the years his paintings have absorbed and reinterpreted these varied locations. There is a sense of the uncanny about his work, a sense of the familiar and the strange wrapped up in one. Take, for example, the policeman calling out over the water in Echo Lake (1998) or the lifeless body of Canoe Lake (1997) – either could be scenes from a crime drama, filtered through the distorting lens of memory.

Doig's most recent works at Michael Werner Gallery, are all of Trinidad, where he has made his home. These paintings contain experiences, places and people that are familiar to the artist and unfamiliar to us, made even stranger by his dark palette and disorienting colours. Doig paints after dark in an old rum factory, while – I am told – listening to Calypso music. Perhaps this is why day and night become fused in his images. One of the largest paintings in this exhibition depicts a blue sunbather lying on a sandy beach in her bikini. But the sky above is a deep shade and the pale orb glowing over the sea could be the sun or the moon. 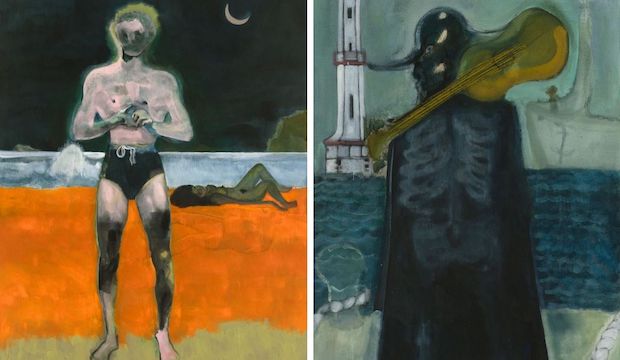 Two almost identically composed paintings show a man in 1950s swimming shorts, standing on a beach. This figure is a recurring motif in Doig's works and is inspired by a photograph of a young Robert Mitchum, taken when the actor was filming in Trinidad. But, while the original image shows the film star in front of a throng of glamorous bathers, Doig's interpretation is somewhat darker. In one version, a man in the background seems to be handling (or wrestling with) a snake; in another Mitchum's face has been distorted into a Francis Bacon-esque smudge.

Most of the people in these paintings are Doig's friends. In another image that fuses night and day, a man sits beside a sea wall, painting flames onto a black canvas. This man is on the prison island of Carrera, where Doig tutors inmates. Also exhibited here is a painting that bears homage to Doig's friend, Mighty Shadow, a Calypso musician who died in 2018. He is cloaked in black with a guitar over his shoulder and a ghostly skeleton emerging through his robes. In the background, the Port of Spain lighthouse ties the man to the place; one seems irrevocably linked to the other. Mighty Shadow appears in another scene, too, haunting a dark street with a pink-eyed ghoul.

For Peter Doig fans, this show will not disappoint, but his paintings require a little time. The longer you stand in front of them, the more you see. This is a world of ghosts and carnival costumes, of musicians and strange beaches – a parallel world that only Doig fully understands, but one that we can glimpse through his mysterious paintings.