This unflinching exhibition explores vulnerability, strength, race and gender, from private images of Taliban fighters to the bull fighters of Spain

12 CW readers are interested
Masculinities: Liberation through Photography, Barbican Centre exhibition review 4 Masculinities: Liberation through Photography, Barbican Centre exhibition review Emily Spicer
What does it mean to be a man in 2020? In recent years masculinity and maleness have undergone fresh scrutiny with revelations from the #metoo movement and phrases such as 'toxic masculinity' plastered across the media. This exhibition takes a look at the many faceted business of being a man and the expectations that accompany it, from 1960 to the present day. Here, we are prompted to consider societal pressure, sexuality and the possible fluidity of gender and that the ideas underpinning masculinity, and what it is to be male, are far from set in stone.

There are more than 300 works in this exhibition, all photography or film, and there is no messing about. Right from the off, we are plunged straight into an exploration of men in war. After all, there are few things considered as manly as a being soldier. But we soon learn that even in this arena, nothing is quite as expected.

When photographer Thomas Dworzak went to Kabul in 2002 to cover the fall of the Taliban after the US invasion, he found a series of private portraits taken in the back of photography studios. These images reveal a surprising side to Taliban fighters, who chose to pose in front of idyllic rural backdrops, holding flowers, wearing kohl eyeliner and sometimes holding hands. 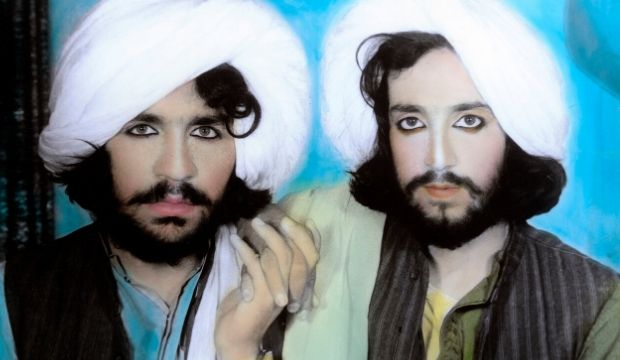 If there is anything as macho as the idea of a soldier, it must surely be a bullfighter. A series of portraits by photographer Rineke Dijkstra depict forcados fresh from the bullring. Forcados work in teams to subdue the bull and Dijkstra was interested in male bonding in this dangerous environment. Here they are, their faces bloodied, their brocaded jackets torn, resembling characters from a Hemingway novel. But there is also something delicate about these men, with their floral garb and gentle faces.

Nearby, a wonderful film by Jeremy Deller explores the rise of middle weight wrestling champion Adrian Street. Street was expected to work as a coal miner, as his forefathers had, but wanted to be a body builder instead. He left the colliery to pursue his dream in the face of much mocking opposition from his father and fellow miners. Street tells his own story, and remembers returning home, clad in flamboyant wrestling garb and make-up. The film includes a photo of him as a young man pouting in iridescent lipstick, while standing next to his father, whose reticent expression is smudged with coal dust. But street looks triumphant and proud, a real-life Zoolander.

Family life and the ageing male body is explored here, too. Anna Fox tackles male aggression in the home with photographs of the interiors of her mother’s cupboards, paired with sentiments spoken by her father, which are tantamount to violent threats. The neat domesticity jars with the hard words, and conjures more than the sum its parts. Nearby, Aneta Bartos’ psychologically charged photographs depict

the body of her father, a retired bodybuilder. She includes herself in these images, too, stripped to her underwear. In one photograph, she is positioned in the foreground, facing the camera, while her father stands behind her, holding an apple in one hand and an extremely phallic and strategically placed tree branch in the other. This is an uneasy image (for the viewer, if not the artist), hinting as it does, at temptation and sexuality in a father-daughter portrait. 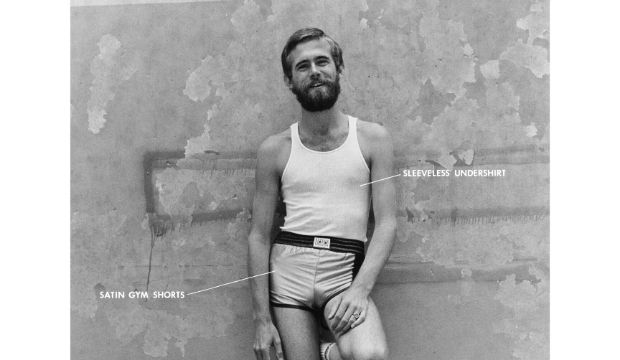 The upper galleries in this exhibition examine queer identity and the Gay Liberation Movement. Sunil Gupta’s images comment on the underground lives of gay men in India, and the longing for sexual freedom. There is also a beautiful film by Isaac Julian titled Looking for Langston, named after the Harlem Renaissance poet Langston Hughes. It deftly marries stylish visuals that recall both the 1920s and the 1980s club scenes with seamless ease, accompanied by readings from Hughe’s poems together with jazz music and archival newsreels. That the film was made in 1989 is crucial to its reading, as it explores ‘the relationship between gay culture and the gaze, with the white gaze, the racist gaze,’ at a time when the AIDS epidemic was at its height.

There is a lot to take in here, but one point is well made. Masculinity is a mutable, ever-evolving idea. It always has been, of course, but so much has happened in last 60 years that our recent history provides fertile ground. There is always more to say, but this exhibition covers much with unflinching clarity.