The heroine of Lewis Carroll’s Alice books has influenced fashion, art and even politics. This blockbuster exhibition at the V&A charts Alice’s enduring appeal

22 CW readers are interested
Alice: Curiouser and Curiouser, V&A review 5 Alice: Curiouser and Curiouser, V&A review Kristina Foster
Lewis Carroll’s Alice books, about a seven-year-old girl who finds herself in a topsy-turvy world of talking creatures, governing playing cards and nonsensical morals, have enchanted readers young and old since Victorian times. But their influence has spread far beyond the page, touching everything from fashion to film, art to advertising and pop-culture to politics. A new blockbuster exhibition at the V&A, curated by award-winning designer Tom Piper, charts the evolution of Alice through the ages, showcasing why, 158 years after her inception, the heroine continues to inspire and delight today.

Alice’s Adventures in Wonderland (1865) and the sequel, Alice Through the Looking-Glass (1871), begin with Alice in the real world, learning lessons and reading in the drawing room before her adventures begin. Similarly, Alice: Curiouser and Curiouser opens with a history lesson. Poring over manuscripts and objects of interest encased in glass, we learn about the real-life inspiration behind the books: from Carroll – then going by his birth name Charles Lutwidge Dodgson – befriending Alice Liddell, daughter of the Dean of Christ Church Oxford and the real-life inspiration of the books, to collaborating with political cartoonist John Tenniel, whose illustrations in the original publications are as famous as the words they depict. 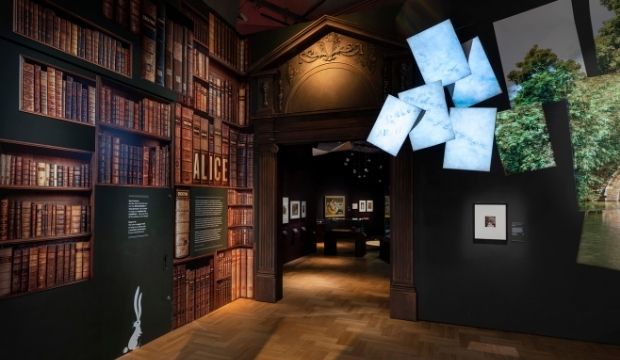 Armed with context, we venture next through an immersive corridor of cardboard doors and flying papers, a playful display which sets the tone for what’s to follow in this expansive, thorough and visually captivating exhibition.

A fiery, peach-hued room, lauded over by a menacing giant caterpillar, documents Alice’s journey from page to screen. The fantastical elements of Carroll’s story have continued to play an important role in the development of CGI, pushing animators beyond pre-existing boundaries. Like a walk-in, cinematic library, the room takes us from Cecil Hepworth and Percy Stowe’s original 1903 movie – a monochrome short that, at 10 minutes long, was the longest film of its day – through to Tim Burton’s live action reimaginings of 2010 and 2016. Due space is given to Disney’s 1951 cartoon masterpiece, animated by the brilliant Mary Blair, which remains a jewel in the production studio’s ever-growing canon. 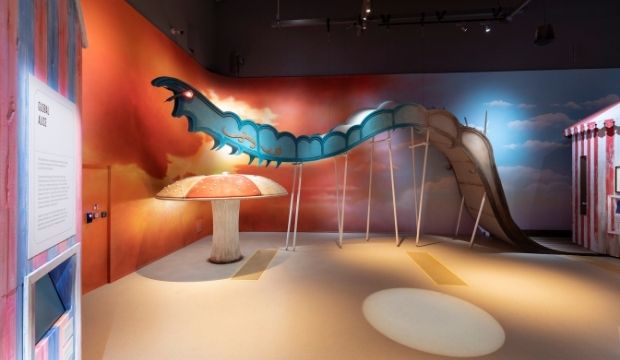 Also on show – and more interesting than the looping snippets from the major films – are the proposed scripts and sketches that never made it to the screen. Walt Disney patented the title Alice in Wonderland back in 1938 and discussed potential directions for the movie separately with surrealist Salvidor Dali, studio artist David Hall, and writer and philosopher Aldous Huxley, before offering the commission to Blair. With visuals from the subsequent Disney film firmly etched in our minds, it’s fascinating – and jarring – to see on paper the alternate routes the movie could have taken.

In a darkened woodland, under the watchful eye of a certain grinning cat, we learn of the Alice books’ influence on the surrealist movement, with Eileen Agar and Edward Burra as well as Dali among those whose works, at times, drew on the more sinister elements of Carroll's world. 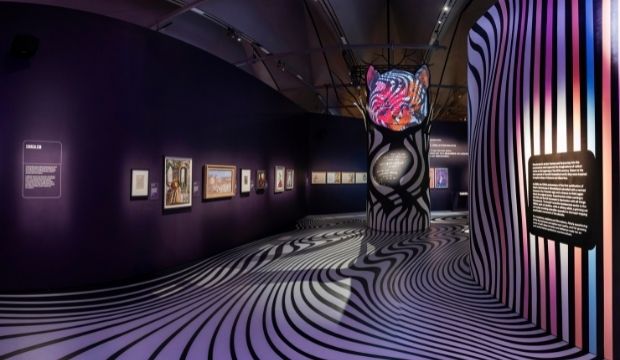 Headstrong and unafraid to question the status quo, Alice later became an icon for counter-culture in the 1960s and 70s. More grown-up examinations of the story fixated on the fluidity of Alice’s identity – something she is unafraid to question. This led to the Alice in Wonderland statue in New York’s Central Park becoming the chosen location for Yayoi Kusama’s sexually liberated naked happening in 1968. While the psychedelic movement used the more trippy liaisons in Alice’s tale for anti-drug messaging – and later as a celebration of experimentation.

The exhibition reaches a visual climax in a room dedicated to the Mad Hatter’s tea party, where a mesmerising, life-sized table dressed for high tea is brought to life by swirling, psychedelic projections. 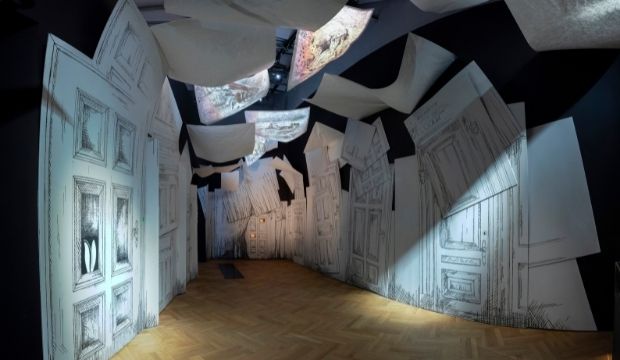 Space is also given to reflect on Alice’s influence on other cultures: from Spain, where the story is injected with a political undercurrent, to Japan, where Tenniel’s illustrations inspired an ongoing girlish fashion trend realised through long striped stockings and puff-sleeved pinafore dresses.

Fashion takes centre stage in the final throes of the exhibition in a chamber dedicated to Alice-inspired dresses designed by titan of the runway Vivienne Westwood and powerful images by fashion photographer Tim Walker from his landmark 2018 edition of the Pirelli Calendar, in which he reimagined Alice with an all-black cast. 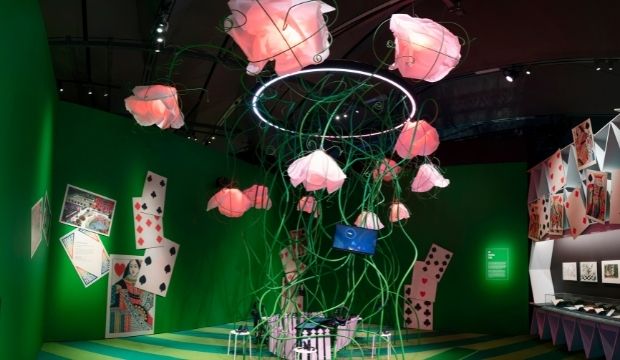 Delicate, design-led installations comprise the centrepiece of most rooms and will delight visitors of all ages. Equally likely to evoke a sense of wonder is a virtual reality experience inviting guests to immerse themselves in the story’s nightmarish game of croquet (but with only a handful of headsets available, expect a wait to play). Meanwhile, running at waist-height in several wings are fact trails and interactive elements ready to engage junior gallery-goers.

Alice may have begun her journey tumbling down a rabbit hole in the mid-1800s, but almost 170 years on, her shape-shifting persona continues to take on new meanings and excite fresh audiences. The V&A’s scrupulously curated exhibition captures the appeal of Alice through the ages, and hints at the potential for future generations to continue to see Carroll’s headstrong heroine as a symbol of empowerment and a portal through which to explore your own identity. 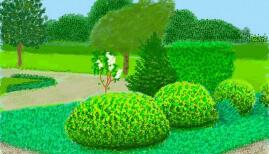