Enjoy a screening of spaghetti western, A Fistful of Dollars, at the BFI this April

Leone’s influence on film making and on westerns in particular has been notable, with elements of his storytelling style visible in the work of Edgar Wright to Quentin Tarantino, as well as Chloé Zhao.

The lynchpin of the Western phenomenon is the director’s second film A Fistful of Dollars: the work not only set the course for spaghetti westerns, but also put Eastwood on the map. Filmed with minimal budget, the story takes place in a small town, which is home to two feuding families. Out of the blue, a stranger arrives and plays both families to his own advantage, resulting in a more feuds, and an excessive death toll. To celebrate the film's re-release this spring, A Fistful of Dollars will be on an extended run throughout the season.

Culture Whisper is offering readers 2 for 1 on screening tickets for A Fistfull of Dollars - use the code Leone241 when booking online, in person or over the phone.

And exclusively for Gold Whisper members, we have 5 free pairs of tickets to see A Fistful of Dollars on 16 April including free entry to preview Zhao's The Rider and drinks beforehand provided by Benugo. In addition, we will be providing a western-themed goody bag per couple containing such delights as coffee from London microroastery Terrone, BFI membership and a discount voucher for cowboy boots from Silver Heart.

Film screening of A Fistful of Dollars, BFI 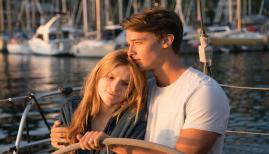