It's back: Doctor Foster returns to BBC with an explosive second series this September

Writer Mike Bartlett (the man behind the 'future history' play, then adapted for the BBC Charles III) gave us a modern-day five-act Jacobean drama, in his story of a Midlands GP who discovers devastating sexual and financial secrets about her husband, takes inspiration from William Congreve's famous line 'hell hath no fury like a woman scorned,' and conceives an extraordinarily creative plan for revenge.

TRY CULTURE WHISPER
Receive free tickets & insider tips to unlock the best of London — direct to your inbox
Violent, lurid, sexual and often farcical, Bartlett's show had all the components of an excellent 17th Century play. It might have been comparable to John Webster’s The Duchess of Malfi or Thomas Middleton’s The Revenger’s Tragedy had it not been for Bartlett's ending which, instead of being bloody and explosive, concluded on a near-amicable note that settled old scores.

Dr Gemma Foster (Suranne Jones) got what appeared to be her heart's desire when the season came to an end; the departure of her now ex-husband and his pregnant wife, and sole custody of her son. It seemed as though life would peacefully continue with nothing more dramatic than Gemma occasionally saving strangers suffering from heart-attacks as she went about her day.

And so, as good as season one was (and, boy, was it good), the arrival of season two has been met with trepidation by viewers who couldn't see where and how conflict could be reinserted into a storyline that ended so neatly and tamely. Could Doctor Foster season two be about to suffer from Broadchurch sickness, resulting in a second series limp enough to tarnish the show's reputation?

Well, relax a bit. Few of us are as clever as Mike Bartlett, who knows just how to re-open old wounds and where to rub the salt. Episode one of the new season begins with the reappearance of Gemma's ex-husband (Bertie Carvel) in the family's hometown. Simon has been absent for two years and – to Gemma's horror – seems to have his life back on track despite disappearing off into obscurity and bankruptcy with a criminal conviction at the end of season one.

Here stands the love-rat, no longer crippled by humiliation, but instead the proud owner of a million-pound house, with a happy young wife on his arm and a new baby to boot. Simon throws a party for the couple's old friends, which is attended by a drunken and badly-behaved Gemma. And then, just when it looks as though season two is, disappointingly, going to be about an increasingly deranged Gemma who is furious that Simon has his life together, things get real.

It's too soon to tell if season two is going to be as good as season one. But as always, this is proper edge-of-your-seat stuff and we hear the season will soon descend yet further into 'dark' and 'twisted' depths. If we were betting people, we'd predict season two will be the UK's highest-rated drama of 2017.

Doctor Foster returns on Tuesday, September 5 at 9pm on BBC One, taking over the slot of Trust Me. 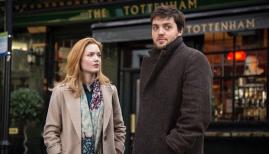