Planet Earth II is the most talked about television series on our screens this winter. We speak to the executive producer of the series, Michael Gunton. 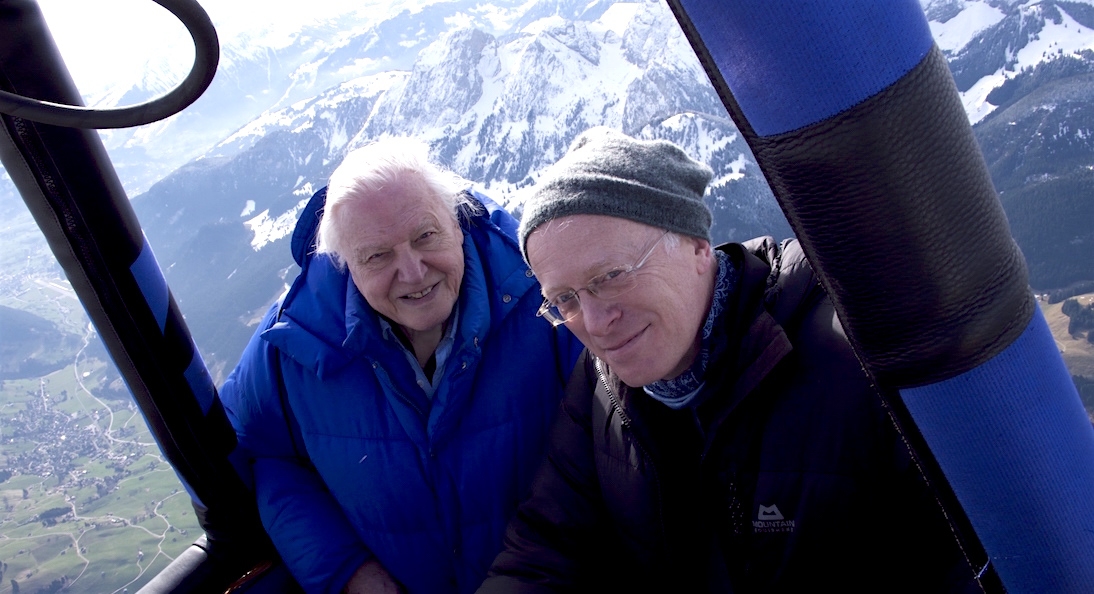 Mike Gunton with David Attenborough during filming for Planet Earth II
Ten years ago, Planet Earth changed the way nature documentaries were made. It redefined our expectations of wildlife films and attracted a wholly new audience to the natural world. This time around Attenborough remains, but technology has advanced beyond compare. Planet Earth II is a series which feels remarkably more epic this time around, allowing us to get closer to the action and enjoy it on a cinematic scale like no other.

It can’t have escaped viewers’ attention that the score is part and parcel of the ambitious feel of the new series. The score comes courtesy of composer to Hollywood, Hanns Zimmer. But what's so special about Hans that made him the standout choice for a nature documentary? “Hans Zimmer is …Hans Zimmer. Get the music right and it delivers atmosphere, tension and together with the narration and the soundscape of natural sounds makes the film an experience that satisfies head and heart as well as eyes,” says Mike.

Combined with Zimmer’s emotive score, Attenborough’s dulcet tones provide the narrative with a rich and insightful evisceration of what we see on screen. What precisely is it that we can’t get enough of, then? In a nutshell, he says, it's "authority, knowledge, tone, range, humour, humility, the perfect choice of word, and great dramatic timing." But then you can’t round Attenborough up in a nutshell. He is, quite simply, inimitable.

Mike tells us that Attenborough’s favourite sequence of the series depicts the snow leopard in Mountains, the standout character that many people will remember from the first series. He talks about the frenetic pace of change in technology and how it aided the capturing of the mountain predator. This was "one of the reasons [we] felt the time was right to make a sequel," he says. "Miniaturisation of cameras, remotely operated cameras and gyro-stabilised cameras (that could be operated by cameramen themselves) meant we could take the camera of the tripod and get into the animals world and see our planet's landscapes through their eyes.” 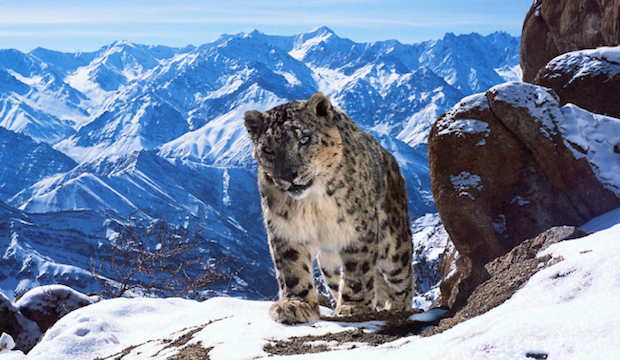 Yet it isn’t just the Attenborough stamp that draws viewers to the series. What does it say about audiences that even in today’s technologically saturated age we still find the natural world so mesmerising? He tells us that “the instinctive connection with nature runs deep within us – for millennia we were part of the natural world and that legacy still draws us to the wonders of wilderness, even if it might now only be subconscious."

The debut episode of Planet Earth II boasts 12.1 million viewers, the largest audience for any natural history launch in 15 years. In case you were wondering, the next largest audience tuned in for Planet Earth in 2006. And what does Mike think of the impact urban dwelling has had on our viewing expectations and experiences? "For some people, our programmes are the only window on nature, the only way they can make that reconnection,” he says.

Since over half of the human population now live in cities, it’s only right that one episode in the new series is dedicated to human relationships with urban animals since “the urban environment is a really important part of Planet Earth today – more than 50% of us live in cities and the rate of growth of the urban world is staggering. "It is becoming an ecosystem in its own right, almost a biome, with its own ecology and fauna. The animals that share cities with us can be very successful as long as they adapt to cope with competing with us humans.” 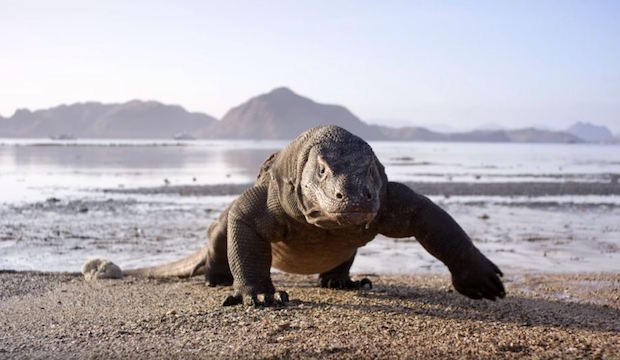 Largest of the lizards: A Komodo Dragon

So what then can we do as individuals to protect our planet and the variety of animal species we have on it? Mike's solution is a complex one. He says that “if cities are to be a habitat for nature there needs to be a lot of thought about how cites of the future might be modified or designed to allow us and nature to co-habit as effectively as possible – but most of all they need space." And that's a large part of he problem, since "it’s harder to persuade people to not take everything the planet offers, to leave animals and plants a little bit more free space to thrive.”

With the rise of platforms like Netflix, has the scope for the power and influence of documentaries changed at all? Mike is a staunch supporter of traditional channels – the BBC and Channel 4 – which “both produce and showcase the most significant amounts of challenging, entertaining high quality documentaries.” Yet given that we’ve heard conversations about the series in coffee shops, on the Twittersphere and even, believe it or not, the Tube, is there something in documentaries which feature films can’t offer?

Planet Earth II has to compete with high-budget dramas and light entertainment, he tells us, so why do we still watch documentaries when there's so much more out there? Mike believes that “audiences look to documentaries to bring a sense of reality and the chance to understand our world...they allow audiences to briefly escape to a wonderful, beautiful, dramatic world beyond their normal experience, but one they know is true.” 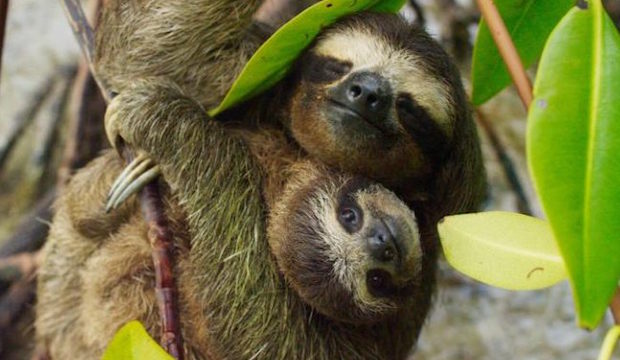 Looking for love: Sloths couple up in Islands

So how then do the producers go about finding and creating content which audiences will respond to? Is it a case of cherry picking specific species and features of behaviour prior to filming, or is it down to what happens on a day-by-day basis, adding the narrative later?

In reality, it's a combination of the two, he explains, saying “we are very precise about the story we want to tell. We research the details and potential story ‘beats’ that might emerge, the best location to achieve it, the best time of year to shoot, the right equipment and even the best field advisors to work with – all to ensure we have the best chance of getting all the elements we need to tell the story as we see it." Of course, this method doesn't always go to plan, he notes, since "animals don’t read scripts and some times they just extemporise and in that case we go with the flow – the results are sometimes far better than our planned story.”

It’s no surprise that Mike's cinematic inspirations range from large-scale epic master, David Lean and the sci-fi horror of Ridley Scott given the nightmarish chase scene between snakes and iguanas in Islands. Explaining how the scene came to conception, he remembers that “we were on the island of Fernandina to shoot a particular element of iguana life when we suddenly noticed baby iguanas being hunted by what looked like a medusa head of snakes hunting behavior behavior was happening. The original story was immediately abandoned - we switched our attention to following this almost nightmarish battle and ended up with what I think is a once in a career story.” 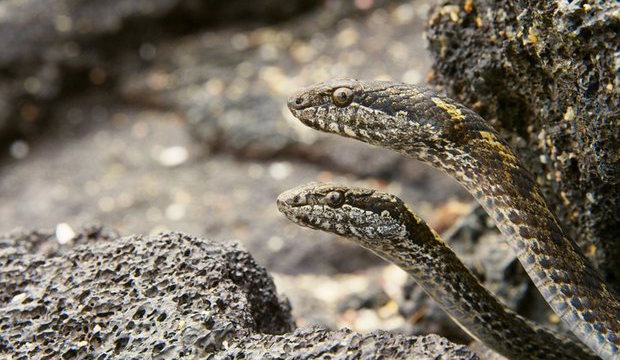 The blockbuster we deserved: Snakes vs Iguana

Planet Earth II certainly takes a different perspective to it’s forerunner. Thanks to advances in technology, it looks at the natural world from within the world of nature rather than from the almost god-like perspective of the first series. With production running over four years, with footage shot in 40 countries over 117 filming trips, Gunton had the enviable role of being present on many of these trips himself.

So when we asked him where stands out in his mind as the one place which has most inspired him, he was hard-pressed to choose, but in the end narrowed it down to two. “The Skelton Coast of Namibia and the Dry Valleys of Antarctica are both extraordinary places that make you feel very, very insignificant. I’ve been lucky enough to do aerial filming in both places and the beauty, scale and utter wilderness when seen from 10,000 feet up is unforgettable.”

Unforgettable is probably a word many of us will use to describe the series as we tune in week on week to watch on a Sunday night. What then does Mike hope, ten years on from the birth of it’s older sibling, that the series will achieve?

His expectations are high and ambitious, but he hopes that “if it achieves the same sense of wonder about our planet - a renewed interest it the wild places and the animals ( and plants) that live in them - I’ll be very happy. But I also hope it might go further, giving audiences a new perspective on the lives of animals, by seeing the world and the challenges it creates through animal eyes – so that as well as learning about their lives, audiences might feel some sense of empathy with our fellow creatures.” 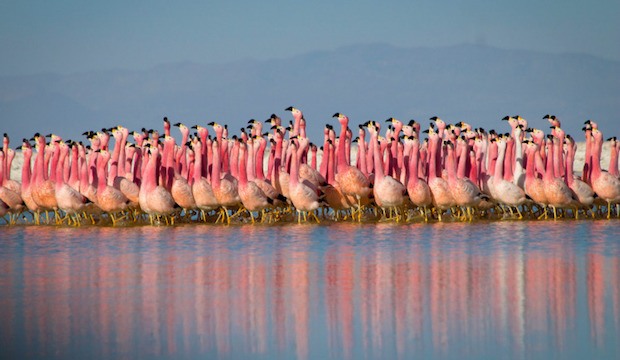 And what have we got to look forward to in the coming weeks? Well, we’ll get up close and personal with the leopards which roam the streets of urban Mumbai, get to know the ping-pong-ball-sized golden moles which populate the Namib Desert, and enjoy a blockbuster-worthy (but hopefully more exciting than Batman vs Superman) bats vs scorpion in Israel’s Negev Desert. We can’t wait.

Planet Earth II airs on BBC One on Sunday night. You can read our reviews of the first two episodes, Islands and Mountains here.