5 of the best Werner Herzog moments

From hunting down Tom Cruise to feeling sorry for penguins, here are some of the finest moments courtesy of Werner Herzog – masterclasses in absurd humour 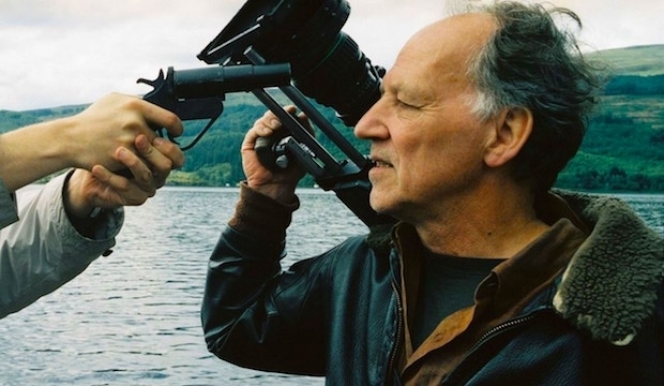 Werner Herzog movies are full of moments like this...
How to describe the experience of watching Werner Herzog? It's sort of like being given the best, most inspiring geography lesson by a teacher who looks like he might kill himself as soon as you break for lunch. Or like listening to Radiohead at half speed while watching Louis Theroux with the sound off.

In case that's not especially helpful, we've compiled a representative list of classic Herzog moments to help you familiarise yourself, as next week sees the UK release of Internet documentary Lo and Behold: Reveries of the Connected World, and volcano doc Into the Inferno hits Netflix on 28 October.

Scroll down to the clips below, but remember: everything's not quite as hopeless as Herzog says it is.

ON 'THE OBSCENITY OF THE JUNGLE'

‘Nature here is violent, base. I wouldn’t see anything erotical here; I would see fornication and asphyxiation and choking and fighting for survival and growing and… just rotting away.’ What’s so precious is the way that young Herzog – moustached, his hair still a deep brown, his sense of desolation already in place – invests those last couple of words with such strong feeling. The savagery of life clearly pains him.

Continuing Herzog’s sideline as a German David Attenborough – if Attenborough sounded like he was constantly wracked by despair – is Encounters at the End of the World, a characteristically bleak-sounding documentary about the Antarctic. It’s here, while interviewing scientist David Ainley, that Herzog’s attention is caught by a penguin separated from its colony.

He describes the penguin as ‘disoriented or deranged’, but, being Herzog, he also manages to imply that it’s colossally depressed, a tragic existential hero ‘heading off into the interior of the vast continent’. The combination of haunting choral music and waddling Hamlet is priceless, and the clip is worth watching just for the way that Herzog asks ‘but why?’

Pretty self-explanatory, this one. Herzog is being interviewed by the BBC’s resident wacky waving inflatable arm-flailing tube man, Mark Kermode, when he’s shot by an unseen sniper. The bullet is only an air rifle pellet – not a ‘significant bullet’, in Herzog’s words – but the timing is comically perfect: that Herzog is randomly shot at exactly the moment that he’s lamenting how ‘nobody cares about [his] films’ seems to perfectly confirm his conception of the universe as violent and unfeeling. Poor Werner.

However self-serious he seems, Herzog clearly understands that his famed gloominess is ripe for parody, and has appeared in a number of self-mocking cameos in unlikely places. The Parks and Recreation one has him moving to Orlando ‘to be closer to Disneyland’, but the best one is in Penguins of Madagascar. The animated kid’s film has him back in the Antarctic, but this time describing the wildlife as ‘joyous, frolicking, waggling, cute, and cuddly’. Where’s the fornication and asphyxiation?

The crowning achievement of his acting career is an actual blockbuster movie role. Playing Tom Cruise’s nemesis in action movie Jack Reacher, Herzog isn’t required to perform so much as reprise his general onscreen persona. Watch the scene above and imagine what he’d have done if he’d gotten his hands on the air rifle sniper.

This is a parody of Herzog rather than the man himself, but it’s too spot-on not to include. The parodist hasn’t captured the singular moan of the voice (who could?), but the wording is perfect: ‘we search for Waldo, but what is Waldo searching for?’