The stage adaptation of mountaineering drama Touching the Void sticks to abstraction: wooden tables and chairs are stacked to convey peaks and a metal frame represents the summit of the Suila Grande.

Such simplicity is a shrewdly implemented by Ti Green and director Tom Morris. Instead of getting caught up in aesthetics, the production emphasises the emotion, the thrill, the passion and the peril that powers this extraordinary true story of two climbers attempting to make history.

Touching the Void began as a memoir in 1988, then was adapted into a BAFTA-winning docudrama in 2003. It follows Joe Simpson and Simon Yates who had to confront death directly in extreme conditions. After succeeding in becoming the first people to climb the west face of the Suila Grande, the mountaineers got caught in a storm. With a broken leg, Joe is unable to return to safety. From an unstable snow-cliff Simon tries to lower him down on a rope, but the extreme elements leave Simon unable to see and convinced that Joe is dead. 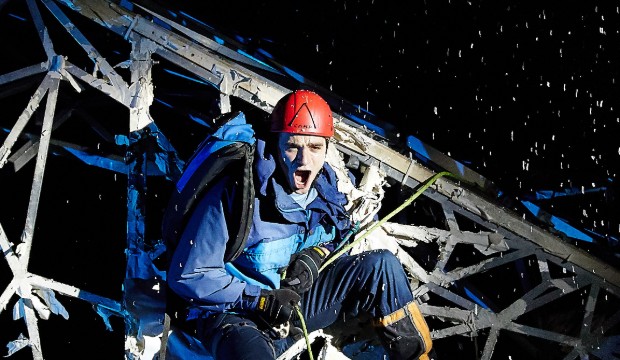 After a rather clunky opening at a fake funeral, David Greig’s stage adaptation becomes fleet-footed and playful, taking us from Sheffield pub to Peruvian glacier and back with just a few beats.

As Joe's sister Sarah (an occasionally overwrought Fiona Hampton) seeks to understand everything about the accident, we are introduced to intriacies of mountaineering and the details of this particular expedition. Tag along gap year student (Patrick McNamee) offers comic relief and a foil to the cultish world of climbing slang.

The show is eloquent in portraying of the motivation for extreme sport, evoking a giddying sense of freedom and passion to make sense of the audacious risks.

The drama peaks, literally, in the first half, which is propelled by excited planning and intrepid ascent. The tempo shifts in the second half, where treacherous descent gives way to desperation and long, drawn-out suffering. Though the slow, agonising battle through pain works to evoke Joe’s astounding mental and physical endurance, after two hours and twenty minutes the drama begins to drag.

Tickets for Touching the Void at Duke of York's Theatre are now on sale. Click here to book.