Alice Birch’s [BLANK] is a stunning and devastating insight into the criminalisation of women. The play was co-commissioned by Clean Break, an all-female theatre company who have for 40 years interrogated the subject of women in prisons.

Birch asks directors and audiences alike to assess their perception of women who experience the criminal justice system. Having written 100 scenes for both children and adults, she invites the director to choose only a selection to stage, requiring each production to build its own narrative and find its own path.

Director Maria Aberg chooses scenes wisely, and casts a formidable ensemble of women and girls who move seamlessly through each scene, keeping their own names throughout. Rosie Elnile’s design at the Donmar mirrors the dramatic construction of the text: two stories of compartmentalised spaces – kitchens, bedrooms – each with a DIY aesthetic. The spaces bleed into each other, demonstrating how each scene might be connected.

Birch’s writing is utterly penetrating. She approaches how the justice system impacts women and girls from all angles, and though some scenes take place within prisons, many do not. Aberg endows the writing with thoughtfulness and generosity, arranging each scene carefully so that it speaks to its context. 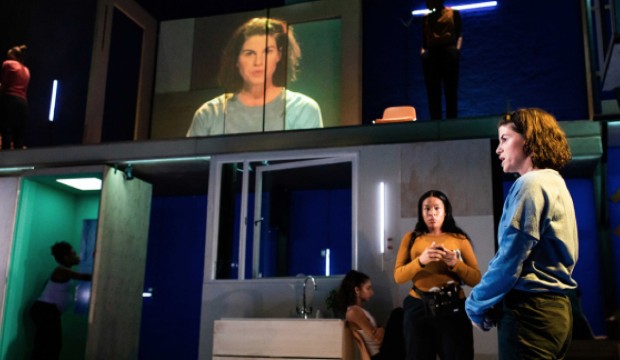 Sitting at the centre of Aberg’s production is a middle-class dinner party where labneh is served with a side of cocaine. Kate O’Flynn is a lawyer who has invited her new girlfriend, Shona Babayemi, to meet her friends – all left-leaning professionals (one’s a detective, another a Bafta-winning documentarian). Birch slowly lets simmer the sheer hypocrisy that fuels the evening, until Babayemi, the neutral guest, can’t help but express the total insincerity that abounds. It’s a dazzling scene, so smartly crafted that it almost doesn’t need Babayemi’s character, however brilliantly portrayed, to burst the bubble. Aberg’s skilful direction does it for us; she follows it up with one of Birch’s shortest and most unflinching scenes.

Like Babayemi, the rest of the ensemble are brilliant. Thusitha Jayasundera is breathtaking as a mother who receives news about her daughter in prison, and Ayesha Antoine is understated and perfectly subtle as a support worker helping a sex worker on the street.

[BLANK] is not straightforward. It forces audiences to question what they are witnessing and why, and resists being an issue-oriented play that provides clear answers. And that’s why it lingers so long after bearing witness; it is a poignant, complex, and remarkable piece of theatre that troubles dominant cultural representations of the subject.