Helmed by Stephen Daldry and Good Chance Theatre, The Walk sees a giant puppet of a Syrian refugee travel from her homeland to the UK in search of her mother

Fortunately, Amal is not alone. While the brutal realities facing refugees and immigrants are highlighted along the way, The Walk is pitched as ‘a celebration of migration and cultural diversity’ – one that leads by example. In each village, town and city Little Amal stops in along the way, she’ll be welcomed by local artists commissioned to tell a different part of her story. 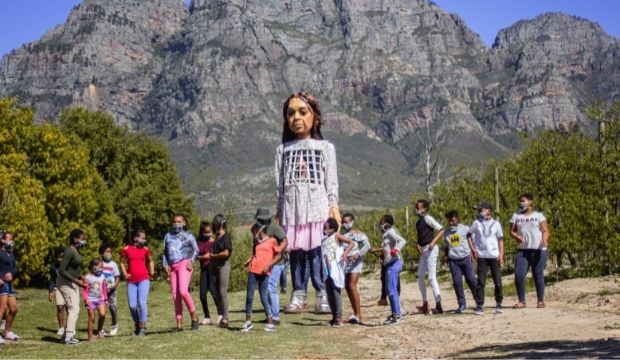 The character of Little Amal has been designed to represent the millions of displaced children forced to make similar journeys across unknown lands in order to escape wars, violence and injustices at home. Amal is a plea to the public not to forget about these children, especially at times when the refugee crisis is not top of the news agenda.

Physically, Little Amal is in brilliant hands. Created by Handspring Puppet Company, who built the impressively life-like beasts of the National Theatre’s War Horse production, the towering cane and carbon fibre-built figure of Amal takes three puppeteers to operate at any one time, with a team of 10 – including two from refugee backgrounds – on hand to animate her.

Joining Daldry and Good Chance executive director Naomi Webb at the helm of the production is former Young Vic boss David Lan and producer Tracey Seaward, with Amir Nizar Zuabi in charge of the artistic direction. 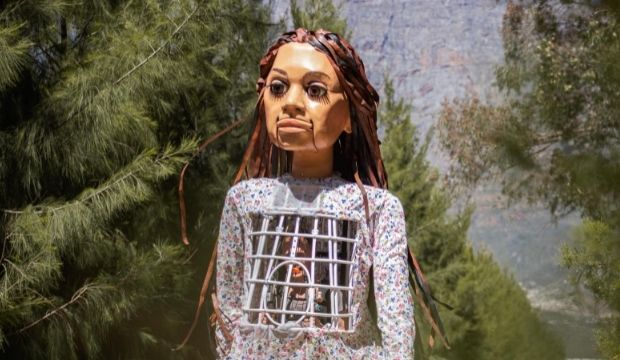 Audiences around the world are able to follow Little Amal’s journey online via social media – and greet her in person too, if she passes through locally. All events are free to watch and have been created in collaboration with local artists.

Little Amal begins her journey in the Turkish city of Gaziantep, where an outdoor light installation of Qanadil lanterns illuminates the path she must follow. Later, in the coastal town of Cesme, a pathway made up of empty shoes guides the puppet to the beach and Aegean Sea beyond. Created by K2 Contemporary Art Centre, the art installation is designed to represent the many thousands of people who have lost their lives crossing the sea in search of a better, safer life elsewhere.

Further highlights along the way include a stop in Athens where, afraid of losing her way, Little Amal ties a thread of red yarn to a landmark and leaves a trail through the city. Here, she also comes face-to-face with a Minotaur puppet created by local organisation UNIMA-HELLAS. 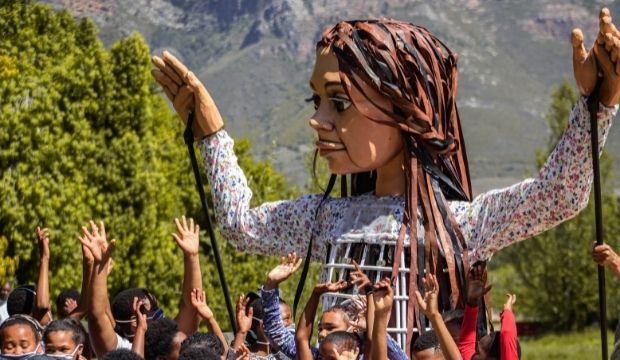 In Rome, Paris and Brussels, the tragic and traumatising nature of Little Amal’s experience is explored, through projections by Syrian visual artist Tammam Azzam (Rome); a multinational refugee camp installation based outside Paris’s Institut du Monde Arabe; and a large-scale dance piece (Brussels).

Little Amal arrives in London on Saturday 23 October 2021 (travelling up from Dover and Canterbury in Kent), where she’s woken on the steps of St Paul’s Cathedral by faith leaders. From there, she journeys across the river to the South Bank, interacting with major cultural institutions including the National Theatre, Shakespeare’s Globe, Southbank Centre and Somerset House – each of which is preparing an appropriate welcome. Cultured out, Little Amal heads to Covent Garden’s Royal Opera House, where she falls asleep in the Paul Hamlyn Hall, surrounded by singers, dancers and musicians holding a night vigil to guard her from bad dreams. 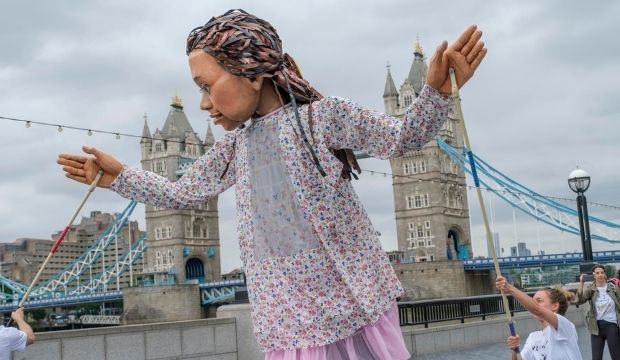 The following day, Sunday 24 October, marks Amal’s 10th birthday – a celebration which begins with a dawn chorus performed at the Royal Opera House followed by a birthday party at the V&A museum, to which children from across the city are invited. London audiences have a final chance to see Amal later that day when the puppet walks through central London before making her way to the Roundhouse in Camden, where a birthday party and concert has been planned in her honour.

Heading north from London, the puppet is making stops in Oxford, Coventry, Birmingham and Sheffield before concluding her journey in Manchester. Here, an exhibition exploring childhood, created with local schools and refugee communities, helps Little Amal prepare to begin a new life.

Through presenting audiences in eight different countries with a shining example of how refugees could – and should – be treated, The Walk illustrates what can be achieved if we open our hearts and communities to those who arrive from overseas in search of sanctuary.

The Walk has launched a Kickstarter campaign which invites the public to help to fund Amal’s journey at £1 per step. Click here to donate. 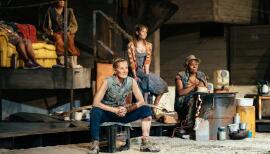 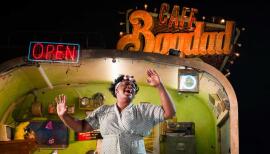