The prolific composer and lyricist discusses his musical Follies, ahead of the NT’s new production of the show

TRY CULTURE WHISPER
Receive free tickets & insider tips to unlock the best of London — direct to your inbox
Over more than 50 years of writing music and lyrics, Sondheim has been behind some of the most memorable musicals - from West Side Story to A Little Night Music. His monumental contributions to theatre have already been marked in an Oscar, eight Grammy Awards, an Olivier, a Pulitzer, the Presidential Medal of Freedom and a record-breaking eight Tony awards.

Now, the composer and lyricist makes a rare public appearance to discuss his 1971 musical Follies, ahead of a landmark National Theatre revival.

Tickets to this talk will certainly be in high demand, and the ballot closes on 16 August at noon. Also, winning the ballot only guarantees the opportunity to buy tickets – if successful, you will have between 1pm on 16 August and 1pm on 17 August to go online and book your ticket, which costs £15 (or £5 – £7.50 for restricted view). 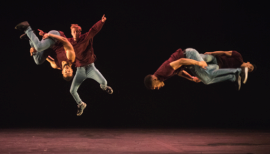