There is a slow-burning, almost off-putting start; six dancers circle the stage solemnly and slide ungainly on their knees before breaking off into sets of twos and threes to deliver more deliberate movements. Their faces are expressionless and neutral, symbolic of an archaic, barren environment where only black is worn. The understated and synchronized choreography hints at the bold athleticism to come.

The fun of this piece really begins when Young-Gyu Jang’s score changes to a more pulsating techno rhythm. The dancers begin to experiment with their vivid costumes, the women are lifted in the air while they place the skirts over their head. Eventually the garments are discarded entirely. The women dance ferociously in lengthy sections of drilled, repetitious movements. They dance to forget themselves in this new genderless state where both the men and women are topless.

Hyekyoung Kim demonstrates particular fearlessness in these intensely physical sections. She is tiny and of delicate frame, but remains commanding and strong. She also engages in a repeated section with a man who appears to dominate her. They stand face to face, as if they are about to come to blows before she dramatically backs off, jumping into a foetal position. It’s a rare darker moment in a piece that builds to a joyous and whacky conclusion.

Ahn cuts a regal figure, performing ritualistic choreography and radiating a calmer presence in her lone moments on stage. She appears bemused by her younger counterparts.

The continuous swapping of costumes is difficult to keep up with, and as the pace increases the dancers’ endurance is truly tested. In the final sections, the beat changes once more, this time with a repeated pattern of phone bleeps and ringing over the top. The dancers become hysterical and the movements more chaotic.

The women are joyful in this new environment where the dresses are now white. They hop from foot to foot in a frantic jive action. It’s the first time we see them smile.

At 80 minutes running time, the humour is welcome by this point. Ahn works her dancers hard, but the message is not told with clarity, making the the visual elements perhaps the most enjoyable part of this work 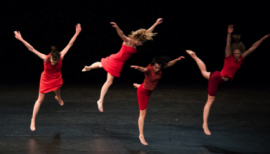 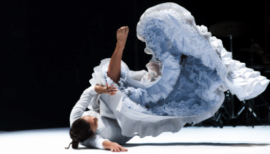 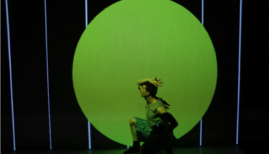