Molina arrives at the Barbican Theatre wreathed in distinctions and prizes, including the Max Award 2017 for Best Dancer and Best Choreography for her current show, where she pushes the traditional dance form from Andalucia in Southern Spain into avant-garde and often surreal territory.

As a dancer, she is irresistible. Her small, compact body radiates energy, her footwork adds ever more intricate steps and permutations to the traditional stomping or zapateado. In Fallen from Heaven she is supported by a large production team, as well as a stupendous quartet of musicians that include classical and electric guitars, percussion and a powerful singer in José Ángel Carmona.

The show starts when the musicians lined up at the back of the stage launch into a loud, rock-inflected brief musical number. The stage is suddenly plunged into darkness, and when the lights go up, Molina is standing there immobile in a traditional white and flouncy flamenco dress.

There she stands swaying silently and oh so lightly for what seems like an eternity; then gradually one arm slowly lifts, and her body lists sideways at an impossible angle until she finally falls to the ground. Equally slowly, a bare foot emerges from the long skirt; she rolls around; an electronic hum is heard, at first almost imperceptible, but becoming increasingly audible.

Is this a creature fallen from heaven and trying to adapt to life in an unknown elsewhere? As if to bear this out, the image of a planet is projected high up onto the stage’s white backdrop.

Molina rises. Undresses completely. Still on stage pulls on a white body stocking and gets into chunky shoes and even chunkier kneepads. No feminine frills here.

The musicians strike up, and she starts to dance. There’s something almost demonic in her attack: the flamenco moves are there - stomping feet, flowing arms, pliant waist - but are now cleverly distorted, not so that they’re not identifiable as flamenco, but enough to amount to her very own language.

Where I had a problem was in engaging with the humour. Towards the end of this section, and surrounded by her musicians, Molina puts on a black leather S & M harness, attaching a bag of crips to her lower abdomen, while all the men around her eat their own bags of crisps; and eventually she stuffs her mouth with crisps too. The point? Your guess is as good as mine.

In the next section she comes on in a short silk dressing gown, and does a dance with a long pole, which one moment she rides like a witch’s broom, the next turns into a grotesque phallic symbol.

A darker section follows, where Molina slowly climbs into a soiled plastic skirt - a distorted mirror image of her original pristine flamenco dress - and drags herself around the stage reprising many of the movements of the opening section, and leaving behind a trail of brown slime, before having her legs washed by one of the musicians, changing into a simple long brown/purple dress and performing a dark dance charged with emotion. This particular dance number is superb.

The end is as riotous as you have come to expect: the men bring her a basket of flowers and fruit. Now dressed in a back bikini, she sticks a couple of flowers into her bikini bottom, picks up plump bunches of grapes and eats greedily, before jumping off stage and running along the front rows gifting flowers to bemused and/or delighted audience members.

It’s all rather baffling… but the first night audience loved it, many granting Rocío Molina a long standing ovation. She has a faithful and appreciative public in countries that range from the USA to Taiwan; clearly London, too, has succumbed to her artistry and madcap style.

In conversation: A French and American take on Emily in Paris 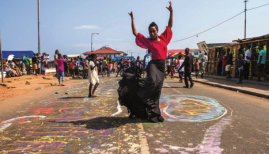 DU17, Out of the System Review 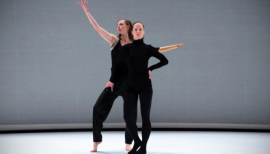 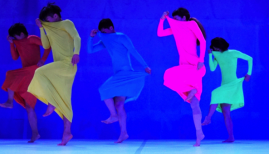