Cut loose with this big-haired, high-energy stage version of the hit 1980s film: Footloose – the Musical returns to London for a limited run at the Peacock Theatre

TRY CULTURE WHISPER
Receive free tickets & insider tips to unlock the best of London — direct to your inbox
For those with a taste for such things, Footloose the Musical certainly delivers. Dean Pitchford and Walter Bobbie's adaptation of the 1984 film won four Tonys when it opened on Broadway in the late 1990s. After a national tour, it returns to London for a short stint at the Peacock Theatre in a cloud of hairspray.

We saw Footloose – the Musical last year at Wimbledon Theatre and gave it ★★★★★.

The story of romance and rebellion in a small town is brought to life on stage with a blast of perms, ra-ra skirts and a score that goes beyond the beloved titular track with new songs and newly-added 1980s anthems 'I Need a Hero' and 'Let's Hear it for the Boy'. At the heart of the high-octane singing, dancing and music are the remarkably talented performers who do all three at once. With a smaller cast (and budget) than your standard musical, Footloose ditches the big band and relies on peppy 'triple threat' performers, who play their own instruments on stage. It works to intensify the energy, keep all the action on stage and make you want to dust off that old clarinet and learn to dance.

It might be about a ban on dancing, but Footloose on stage isn't short of vibrant choreography. Set in the depths of Bible-belt conservatism, it brings Midwestern flair to the standard 1980s routines; hi-kicks and hip gyrations in the high school cafeteria are offset with line dancing and red cowboy boots. 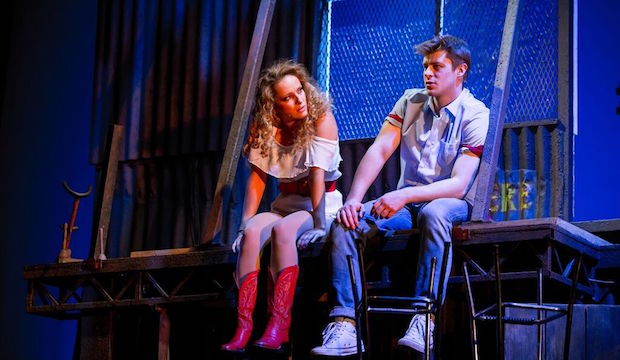 Ren McCormack, to be played by Pop Idol alumnus Gareth Gates, is the new kid in town and, by default, an outsider. Sparks fly when he comes up against preacher's daughter, Ariel, whose 'bad girl' image is supposed to distract from her conservative upbringing.

Eclipsing the big names and main characters is a supporting cast who slip into the splits then play cello, guitar, bass, keys and more, all while still singing and dancing with gusto.

Much like the film, the characterisation is clunky and the angsty undercurrent is too saccharine to take seriously. It's hardly high drama and we have to confess stifling giggles at the poetry-writing teen-romance denouement. But, then, this naivety is part of the charm, and this musical has got enough spirit to shine through the cheesiness.