World famous from Star Trek and Lord of the Rings respectively, plus a plethora of high profile parts spanning the West End, Broadway and Hollywood, Patrick Stewart and Ian McKellen are perhaps our most esteemed, best-loved thespians. And, to the delight of their hoards of fans, the pair are also firm friends, who last shared the London stage in 2013's celebrated production of Waiting for Godot (Theatre Royal Haymarket).

No Man's Land sees Spooner and Hirst (McKellen and Stewart) return to Hirtst’s lavish drawing room having met earlier that evening in a pub. Questions are soon raised, however. Did they know each other as youngsters? What day is it? And why was the door locked from the outside? 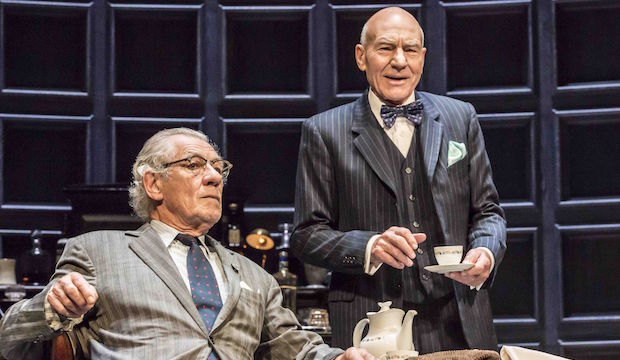 When two of the greatest actors of a generation unite onstage, expectations are high. McKellen and Stewart do not disappoint. Stewart captures perfectly the sense of fading grandeur – he is poised and commanding but also desperately frail. McKellen gives a masterful physical performance, the slight skip in his gait betraying both Spooner’s ever increasing blood alcohol level and his distance from the constraints of Hirst’s household. Both men at times take charge of the stage and at times appear to sink into the furniture – both states seem equally effortless.

Owen Teale and Damien Molony lend very able assistance to the action as Hirst’s man servants, effectively shaking up the rhythm of the stage with their presence.

Don’t go to No Man’s Land expecting a variation on the predictable 'stage of white men' format and don't expecting an easy evening of theatre.

The image of our beloved national treasures drinking whiskey in leather armchairs is a deceptively comfortable one, but the play itself is remarkably obscure - memories are false, time goes unmarked and everyone present has had several whiskeys.

Performances of Pinter’s work run the risk of disappearing into their own cleverness and appearing rather self-congratulatory. Fortunately, this was nowhere to be found on this stage, with all four actors delivering even the most poetic dialogue with a naturalistic ease.

The density of the script is countered by simplicity of staging; Stephen Brimson Lewis’ plush leather interiors convey the opulence of Hirst’s existence, whilst the curved walls of the set add to the feeling of discomfort. There is, after all, nowhere to hide in a round room.

It is no accident that Pinter has made three of the four men in No Man’s Land poets, as the play forces us to question how to respond to the world– is pragmatism or poeticism the best policy? Romanticism or realism? Truth or a beautifully constructed lie?

Of course, despite its complexity, the play’s biggest selling point is the two men on the poster. And we could have watched them drink whiskey in their armchairs all evening.