Have you got the stamina for nine hours of Chekhov? This trilogy of early plays, adapted by David Hare, is a vibrant, absorbing cultural marathon

But David Hare’s adaptations of Platonov, Ivanov and The Seagull also shine with a disarming timelessness and uneasy comedy.

The crystallisation of these characteristic themes can be traced through the trilogy of early lesser-known plays, which comes to the National Theatre after superlative reviews at Chichester.

First things first, three plays in a row is a gruelling undertaking in any context. And, as ever with Chekhov, the subject matter spans malaise, desperation and self-hatred, with just a smattering of farce. Trilogy may be the buzzword of bestsellers and back-to-back watching is the standard thanks to boxsets and Netflix -- but live performance adds intensity (and the Olivier theatre seats aren’t as comfy as the sofa).

There is of course no need to binge-watch all three plays. Unlike the James Play Trilogy of 2014, which combined to tell an epic history, the narratives are completely self-contained and were written by Chekhov as standalone dramas. (If you book just one make it Platonov).

But immersing yourself in the full trilogy sharpens your sense of each separate play world. Linguistic parallels and overarching preoccupations are heightened by sheer proximity. Audience members experience the move towards modernity, always acutely aware how the seeds of ideas from the last play develop differently as its writer matures.

On a more tangible level, the same dreamy set, subtly shifted with each play, roots you in the rural Russian surroundings that Chekhov’s characters so often try and fail to leave. And a meta-textual sense of these characters as versions of each other in the playwright’s mind is reflected by the cast of tireless actors, who return in each play with a new role – and whose verve and stamina puts us yawning, fidgety audience members to shame. 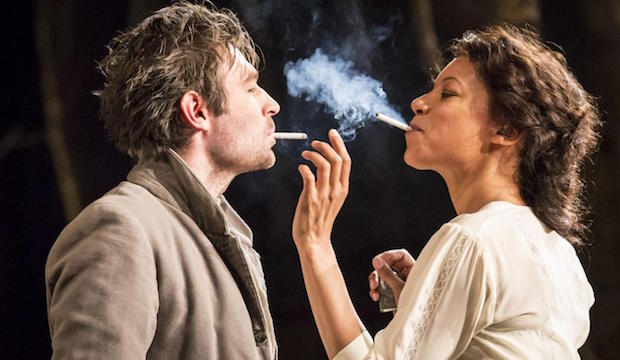 This early, uncompleted play is the snappiest, sharpest and funniest of the three productions (and perhaps benefits from the fresh vigour of being the first).

James McArdle is pure impish charm as the titular rogue Platonov, whose faded good looks, fierce intelligence and faltering sense of self-worth incite him to cause havoc with everyone else’s relationships, leaving a trail of broken hearts. But this is no mere lady killer comedy and therein lies the magnetism. The complexity of both Platonov and the women he seduces prohibits the audience from taking sides or making easy assumptions about his motivations. The script shines with humanity across a full spectrum for delight to despair. 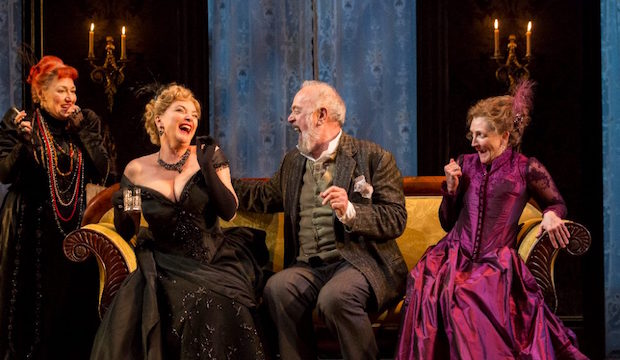 Just as even the most ardent of audience member’s attention might start to wane, comes the most introspective and intense of the plays. With a self-consciously Prince Hamlet preoccupation with his own failures, doubts and wasted youth Ivanov makes for a charmless hero, brought to life with aching honest by Geoffrey Streatfeild. His foil, the equally self-obessesed ‘honest man’ of a young doctor (James McArdle) is even less appealing. After some lively comedy at the expense of Russisa's high society (mostly poking fun at women)
the relief is sparse and romance never feels like a viable option. Instead we’re given brutal language and nuanced portrait of depression.

In an age where suicide and masculinity are still devastatingly connected, the ideas are particularly potent. But depth of Ivanov's despair, too entrenched to be wavered by the actions of other characters, means the core of the play is a cerebral character study, which, though fascinating, is a weighty watch. 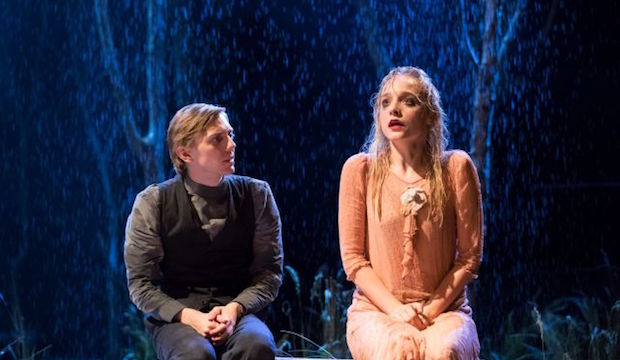 The final instalment is the best known and most regularly revived of the trilogy and it’s clear why – discussions of innovation in art and representations of female aging and troubled familial relationships still spark with modern audiences.

It is Anna Chancellor as the capricious applause-junkie Irina and Olivia Vinall, in her third role of day, as luminous Nina who make this production of The Seagull remarkable. Chancellor avoids all pitfalls of caricature in her portrayal of a mother whose desperate need for attention vacillates between hilarious and horrific. We laugh heartily as she frolics across the stage insisting how easily she could play the part of a teenager, but we can barely watch when she tends to the wounds of her suicidal son.

Vinall has already captured the young ingenue in her last two roles, and here she radiates the kind of promise and hope that shapes aspiring actress Nina. But by the final scenes, when she returns a 'ruined woman', Vinall gives a heart-wrenching portrayal of total isolation and hopelessness, undercutting soppiness or sentimentality with a flickering sense of mental illness.