: Freddie Fox will take over the role or Romeo after Richard Madden has had to pull out due to injury.

Take a Game of Thrones Prince Charming, a Cinderella whose beauty is emblazoned across Billboards and our foremost director of Shakespeare and what do you get?

Kenneth Branagh’s production of Romeo and Juliet at the Garrick Theatre is easily the sexiest offering in a commemorative year packed with Shakespeare.

With Lily James (Downton Abbey, Cinderella) and Richard Madden (Game of Thrones, Cinderella) as the star-crossed lovers firing up the under 30s, plus Shakespearean stalwart Derek Jacobi for the more seasoned theatregoers, it was always going to be a crowd pleaser.

Branagh plays to the masses with a stylish, slick take on the tragedy.

Too easy to watch sometimes. A soundtrack of easy-listening lounge jazz in the background cheapens the poetry with strains of primetime adverts for Italian package holidays.

It’s a play built on oxymoron, structurally and linguistically, and this production reaches neither extreme. The rollercoaster of emotions – from seduction to suicide – is smoothed over. Branagh’s take is entertaining and engagingly fast-paced, but often at the cost of tenderness and tension.

The caveat and leading light is Lily James’ Juliet. Burning brighter than the torches, taking in the spotlight at the masked ball and caressing the mic stand, she is magnetic (and alarmingly alluring, if we are supposed to believe Juliet is 14).

But James brings more than just radiance to the part. She makes the sudden all-consuming infatuation relatable and fresh. But there’s a keen sense of the intensity of youth too; sweet nothings to Romeo from the balcony are interrupted with a snappy, sulky rant at her mum. Then, in the second half, James brings the same unaffected vigour to Juliet’s desperate demise. 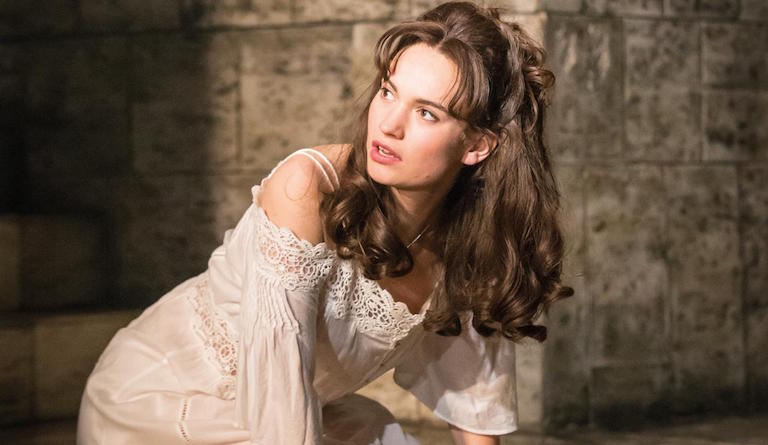 In comparison, Richard Madden’s more impassive Romeo feels pedestrian. Not quite the dangerous cad nor the tortured romantic hero, he seems instead like the kind of suit-wearing young man mothers hope their daughter will marry.

The chemistry doesn’t sizzle and that bitter post-coital moment before Romeo leaves for exile is staged with brother/sister playfulness.

Comedy and spark comes courtesy of the mighty Derek Jacobi as Mercutio. He relishes every last syllable in the most spirited Queen Mab speech we’ve ever seen. The pure panache he brings to the role almost justifies the unconventional casting.

But it still doesn’t make much sense. Young Romeo’s best friend and confidante is a suave white-haired septuagenarian with a walking stick. ‘To see him in Shakespeare is an event in itself’ Branagh said of the casting. And indeed it is… even if it left the teens behind us confused about the ‘random old guy’.

Much of the animated, magnetic energy dies along with Mercutio at the end of the first half, but it doesn’t have the tragic thrust of wasted young life.

And from there the second half, with its rising body count and familiar ending, never quite transcends the familiar. Of course everyone is expecting the double suicide; over-exposure has made us numb. This production serves up the crypt scene with elegance, but fails to make its audience see the plot afresh and really feel for the woeful ill-fated lovers.