Incoming Globe artistic director Emma Rice promised 'wonder' for her inaugural season and there’s no doubt she delivers. Ethereal white orbs are suspended in the sky, Bollywood garlands emblazon the stage and this distinctly modern dress production fizzes with life.

In a gleefully subversive move (that’s utterly justified by the talents of the cast), Rice flouts the outdated White Male model of Shakespeare with a ethnically diverse, gender-bending, pansexual riot, where sonnets become pop songs, the mechanicals blast Bowie and Puck (Katy Owen) leaps around in glittery light-up trainers.

Forget the Elizabethan jigs and lutes that welcomed you into the theatre back in Dominic Dromgoole’s reign. From the opening line, this 'Dream' shines with surprises. The play-within-a-play plot gets a playful new layer with help from Globe staff including ‘peripatetic music teacher’ Rita Quince (Lucy Thackery) and the ever uproarious Nick Bottom (Ewan Wardrop).

Not only does the course of true love not run smooth, it also doesn’t stick to the path. Instead of Helena, we have Helenus (Ankur Bahl), and an undercurrent of repressed sexuality that adds aching nuance to Demetrius’ adamant rejection. And, with self-described ‘post-modern diva’ and mistress of ‘kamikaze cabaret’ Meow Meow as Titania, fairy magic comes complete with a haphazard striptease and some aerial acrobatics.

It’s the kind of vision that will blast away even the most reluctant teen’s notions about Shakespeare as boring and old-fashioned. Yet, crucially, the visuals don’t drown out the language; the production serves to render the knottier plot lines understandable and make the poetry pop. 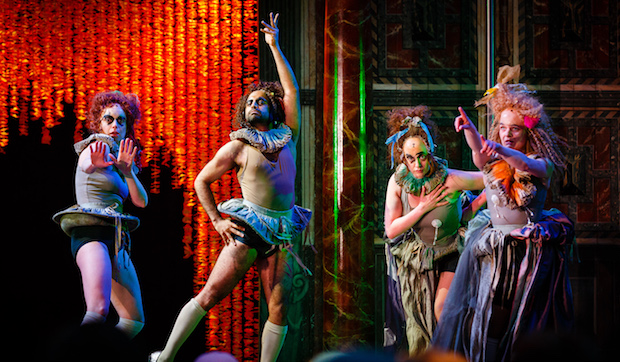 Inevitably among those groundlings left agog at this radical shake up of Shakespeare there were others wondering what’s become of the hallowed values upon which the historic Globe was founded. (A pulsing fairy dance number, complete with nipple tassles, was too much for the elderly lady sitting behind us, who left before the interval).

To the inevitable stream of naysayers, disgusted at this liberal interpretation of the text, the production makes its point with a pointed aside: ‘It’s a visual concept; why’s everybody so obsessed with text?’

The roar of approval from the audience suggests that, in the 450th year since Shakespeare's death, we're open-minded about what it means to appreciate his legacy. Yes, the Globe is rooted in recreating the traditions of Elizabethan entertainment, but that can be in spirit rather than strict, straight revivals.

It's unlikely that every show in Rice's reign will be this radical (indeed, we hope tradition will still have its place). But after this brave, bold entrance, we're excited to see what she's got up her sleeve for the rest of the Wonder Season.