Kenneth Branagh’s theatre residency at the Garrick kicks off with all the dazzling quality and talent we’d expected.
Directing and starring in The Winter’s Tale, Branagh makes the late problem play as fraught as it is majestic. Having admitted that it is 'perhaps' his 'favourite' Shakespeare play, he draws out the tragicomic complexity with compelling humanity and a few striking touches of innovation. And the astonishingly impressive cast of stage and screen legends squeeze out every drop of drama in Shakespeare's script.
The Winter's Tale opens with a merry, sumptuous Victorian Christmas scene, with gifts, ice-skating and snow strewn onto the audience from the balcony. This Nutcracker festivity soon rots from within.
Skittish glances grow into to all-consuming agony as King Leontes (Branagh) convinces himself that his wife Hermione (Miranda Raison) is having an affair with houseguest, friend and fellow king Polixenes.
Branagh paces like a man possessed as desperate paranoia vengeance corrode the family and state. The queen is condemned, the heir banished and the newborn baby abandoned in the forest.
Unsurprisingly, Judi Dench is pitch-perfect as Paulina; pleading for reason with poise and power, she is also warm and wry.
At the tragic crescendo, when Leontes learns first that his suspicions are unfounded and then that his wife and young son are dead, Branagh is winded with grief. And his howls of anguish had the whole theatre shuddering with sobs. 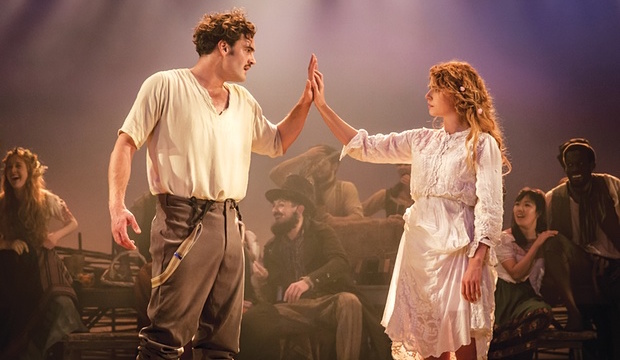 Shakespeare's sixteen-year time jump is matched by a shift in mood. After pole-axing you with the intensity of loss and bitter regret, the production thaws into comedy with a jubilant, musical second half.
John Dagleish exudes impish charm as treacle-voiced trickster Autolycus, bringing song, dance and merriment to the shepherds' feast. Now all grown up, lost daughter Perdita (Jessie Buckley) strikes sizzling chemisty with prince-in-disguise Florizel (Tom Bateman).
This passion and warmth is a stark contrast to Leontes' Court. Time and grief has drained all light and warmth — leaving the courtiers and the palace as frosty and ossified as the statue of the dead queen.
The sudden shift from tragedy to comedy, that magical moment of reanimation that's so notoriously tricky to stage, is handled with aplomb and will send shivers down the spines of even the most sceptical of audience members.
It may not be boundary-breaking theatre, but this first instalment of Kenneth Branagh's residency at the Garrick is Shakespeare and stage-acting at its finest.