But thanks to the luminous comedic talents of Kenneth Branagh and Rob Brydon as the incongruous twosome, you’ll guffaw in spite of yourself.

As small town photographer Bryan Dudley, Brydon mingles suicidal desperation and chirpy verbosity to gleefully black comic effect. He’s at the hotel to get shots of a high profile criminal, but is too busy harassing his estranged wife and looking for a place to hang his noose.

Thanks to a series of mishaps, Dudley fails to end his life and manages to latch onto a stranger in the adjoining hotel room, who’s there to shoot the criminal in a wholly different sense.

Slick, shifty ‘John Smith’ (Branagh) does not appreciate the distraction. With each interruption from the needy neighbour, he must leave his vantage point, hide his rifle and risk his assassination misson. 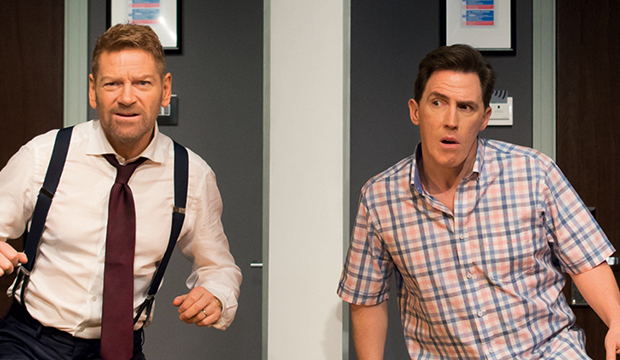 Kenneth Branagh pretending to be dosed up on ketamine is pure priceless comedy. It’s hard to reconcile the discombobulated, spaced-out shell of a man with the Shakespearean heroes Branagh’s famed for playing. But it is his almighty energy and chemistry with Brydon that makes the show so delightfully entertaining.

Best known for rollicking West End hit The Lady Killers, director Sean Foley gives the The Painkiller an increasingly frantic pace. He’s spruced up the show with some fresh touches since the 2011 premiere in Belfast – most notably a reference to ‘Netflix and Chill’ (made funny thanks to Brydon's quixotic delivery).

If you despise slapstick, be warned: subtle, thought-provoking drama this is not. But The Painkiller is silly comedy at its most sumptuous, with irresistable performances from two comic actors at the very top of their game. We defy even the dourest of audience members to leave without a huge grin.