Book now for a new play by Mark Ravenhill: The Cane explores the consequences of control and the legacy of violence

The Cane premieres as part of a new season 'exploring power and control, identity and gender. Instead of spearing consumer culture, Ravenhill turns his talents to issues of control and comeuppance.

An estranged daughter (Nicola Walker) returns to her family home to find it under siege. Her mother (Maggie Steed) is dismissive. Her father (Alun Armstrong) is too preoccupied writing a report to react.

Right from the offset, The Cane is a unsettling, slippery watch, undercut with conflict and uncertainty. Through the prickly exchanges between the daughter and her mother we learn that the commotion has been building around the father's retirement from teaching. The angry mob is made up of school children. 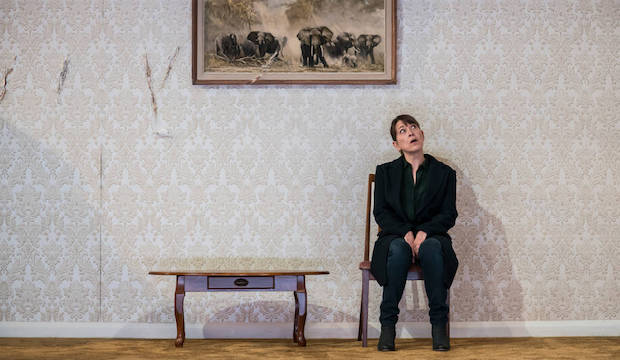 With the daughter as the voice of Academy Schools and the parents as proponents of the old system, the play is deeply rooted in the debate around education systems. It's frigid territory at first, as the characters feel like mouth pieces and the debate feels quite academic. But as the titular cane begins to dominate the drama, the story becomes a more compelling power game.

Thanks to exacting performances from all three actors, the story gets increasingly cutting as we get dragged into the history of corporeal punishment in schools. The cane that's hidden away in the attic is a relic but also a metaphor for burying shame in the past. It's a testament to the writing that a plot so intricately shaped around the specifics of education is just as potent on the resentments and lies of family life.

Though the taut drama stays sedate and darkly funny on the surface, director Vicky Featherstone imbues a sense of unseen violence. There's a Pinterian playfulness to the shifting powers - as we never quite know who is victim. But Ravenhill builds towards a provocative plea about excavating and examining abuse, while the perpetrators are still here to face the music.