Written in 1941, this epic family drama is based so closely on O’Neill’s own life that he tried to keep it from being published until 25 years after his own death. It was a wish thankfully not honoured by his widow, who allowed the play to be published in 1956. Sixty odd years after its premiere, O’Neill’s greatest work remains an emotionally exhausting, resonating, and profound work of American theatre.

In Eyre’s epic production, which started its life in Bristol in 2016, it’s the enduring love between this family amidst all the turmoil and trauma that resounds. In a seemingly glass house, with a Howard Hodgkin-inspired set design by Rob Howell, the outward fog puts the fragility of their lives into focus. Mary Tyrone’s morphine addiction is met with anger, frustration and impatience from her husband James Tyrone and her two sons, James Jr. and Edmund. But they also show sorrow, patience, and affection for the mother. As more family history is unearthed and reconciled, it’s O’Neill’s ability to sculpt such contradictory yet compassionate characters that makes Long Day’s Journey so agonising and so vivid. 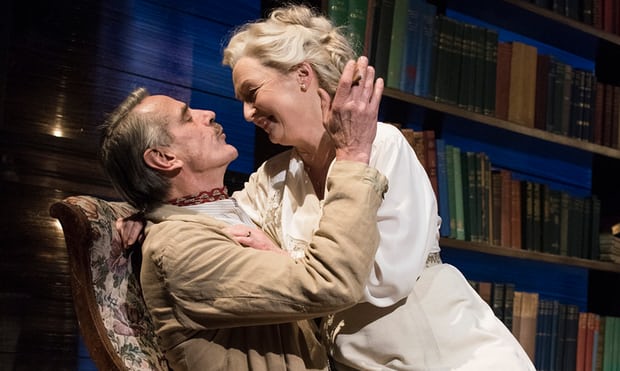 Here at the Wyndham, it’s Manville who wrings every word out of O’Neill’s script to give a momentous and blindingly good portrayal of Mary Tyrone. She ambles around the stage, touching her hair, casting looks of affection and disdain toward the men her life at every turn. It’s a rattling performance, one that allows the emotional weight of the entire piece to sink in.

Beside her as her husband, Irons is strong and pronounced as the once-great actor and miserly father. He is charismatic and shows off the actor side of James Tyrone, each word articulated, each gesture exaggerated. Occasionally he forgets his American accent, and is at his best when he’s beside Manville. Rory Keenan as Jamie, the scorned older son, is also remarkably good. He makes Jamie smug, stubborn, and waggish, and yet these are so clearly defense mechanisms against his feelings of profound grief.

There are, however, some missteps in Eyre’s production. Matthew Beard as Edmund gives a slightly contrived performance, that distances him from the rest of the family and makes him less relatable. His physicality is somewhat forced, and signs of his consumption are infrequent, sometimes seemingly forgotten. It’s also important to note that O’Neill’s title is not figurative – with a three-hour and thirty minute runtime, Long Day’s Journey is indeed long. It sags a little in Act Three, and the emotional exhaustion sometimes shades into melodrama.

That being said, it’s Manville’s Mary that gets the final moment, and it leaves you flattened. With Manville leading the way, Long Day’s Journey Into Night at Wyndham’s Theatre is a worthwhile opportunity to voyage into one of the great American classics performed with depth, subtlety, and real weight.