Hair the Musical, The Vaults review ★★★★★

4 CW readers are interested
Hair the Musical, The Vaults review 3 Hair the Musical, The Vaults review Lucy Brooks
Nothing shatters one's delusions of being a 21st century free-spirited flowerchild like watching a revival of the first hippy musical and thinking it could do with a little polishing around the edges and some air-conditioning in the theatre.

Yes, the revolution should be rough, ready, hot, sticky, but it’s hard to think about world peace and free love when you and 250 other audience members spend two and half hours in the kind or prickly discomfort usually reserved for rush hour tube journeys.

Still, what it lacks in comfort, this 50th anniversary revival of Hair the Musical makes up for in authenticity. Waterloo’s underground Vaults Theatre is transformed into a mini Woodstock for this spirited revival of the landmark Grammy, Tony and Drama Desk award-winning show.

From the reams of rag bunting and protest posters (‘bombing for peace is like f**king for virginity), to the granola-heavy snack selection and the flowy floral shirts of the bar staff, the details are delightful. 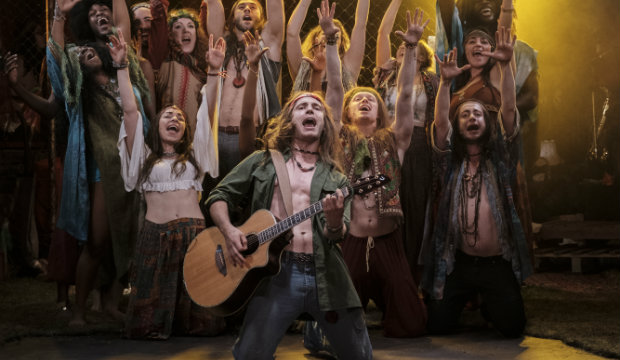 Telling the story of a hippy tribe living in New York and resisting conscription to fight in the Vietnam War, the show is an homage to the counterculture. When it opened Off-Broadway in 1967 it broke the precedent of tame, slick, safe musicals. Indeed, the racial integration, environmentalism, depictions of recreational drug use, free love, and young activists rebelling against conservative parents still feel all too relevant half a century on

Director Jonathan O'Boyle emphasises the youthful exuberance at the heart of Hair, bringing you up close to the psychedelia. A tribe of hirsute young things loll around, smoking joints, stoking fires and stroking each other, and belting out a score of rock ‘n’ rhythm music.

Andy Coxon leads the ensemble cast as an impish Berger, gyrating right up to the audience and commanding everyone’s attention, while Laura Johnson’s Sheila looks on with repressed jealousy. Breakout hits including ‘The Age of Aquarius’ and ‘I Got Life’ are brought to life with plenty of zest by the whole tribe, with standout vocals from Shekinah McFarlane. Though occasional slips in diction left some of the wittier lyrics a little lost, the general swinging sixties spirit still shines through.

It's not the slickest show, but Hair the Musical is certainly infectious and uplifting.

As the entire cast shed their clothes to stand, naked (and rather more pruned than their hippy manes suggested) in name of peaceful protest, we're almost tempted to join them. It's one way to cool off, at least.

Hair the Musical, The Vaults