5 CW readers are interested
Albion, Almeida Theatre review 4 Albion, Almeida Theatre review Lucy Brooks
Mike Bartlett and Rupert Goold, the pair behind 2014's hit King Charles III, return to the Almeida with their 2017 play Albion – bringing the majority of the original cast with them. With the oldest-known name of the island of Great Britain as its title, Bartlett’s pastoral drama is a metaphor to unearth the richness and rot of modern Britain, that feels even more relevant today – in the immediate wake of Brexit – than it did when it premiered three years ago. But Albion is also about an obsession, grief, trauma and dreams. Weighty, poetic and expansive, it maps out the chaotic nature of human relationship to emblematise the current state of the nation.

Audrey Walters, a successful businesswoman played again by the indomitable Victoria Hamilton, moves from Muswell Hill to the rural Albion house. With the goal of resuscitating the estate’s garden, what was once a paragon of English design, she brings tenacity as well as trowel in hand. Her 23-year-old daughter Zara (this time Daisy Edgar-Jones, bringing an appropriate clash of post-teenage grump and wide-eyed zeal for life to the role), her husband Paul (a returning Nicholas Rowe, whom the role fits like a glove), and the partner of her deceased son Anna (newbie Angel Coulby, who embodies the subtle complexities of grief) all adapt to this new terrain. 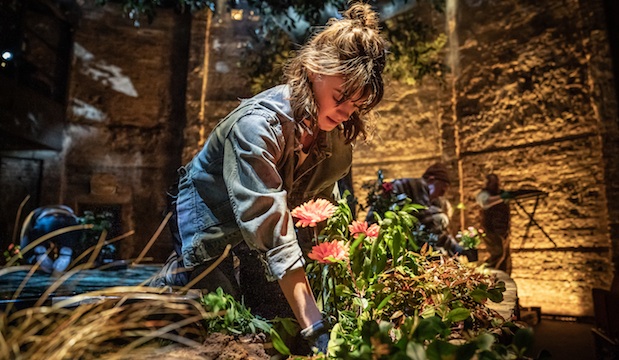 The thrust-stage garden contains all the action, with one great tree hanging overhead in Miriam Buether’s straightforward but nevertheless evocative design. Long, stylised and ritualistic set changes depict the garden’s growth and complement the otherwise dialogue-led and naturalistic scenes.

Bartlett uses the garden as a clear and fecund metaphor for a post-Brexit nation. Audrey’s passion for the garden, a national project as she sees it, jars with the community’s longstanding tradition of holding events on the estate. But the garden metaphor also moves from the populace to the personal, exploring motherhood and grief as well.

In the most Goold-esque moment, Coulby’s Anna becomes overwhelmed and tries in desperation to fill her grief, with the haunting image of her lost lover, crashing thunder, and music around her. The moment defies what has come before and suggests a second half that might further break the conventions of the piece.

However, the second half returns to the naturalism of the first, and languishes slightly in its vitality. Goold is an extremely articulate director, and no point of the three-hour evening drags, but the subject matter starts to turn in on itself in less and less interesting ways. While all characters are given a certain complexity, some like Krystyna (a returning Edyta Budnik, who we’d like to see more of), the young Polish entrepreneur who cleans the estate, seem more like add-ons to fully encompass the metaphor than they do fully realised individuals. 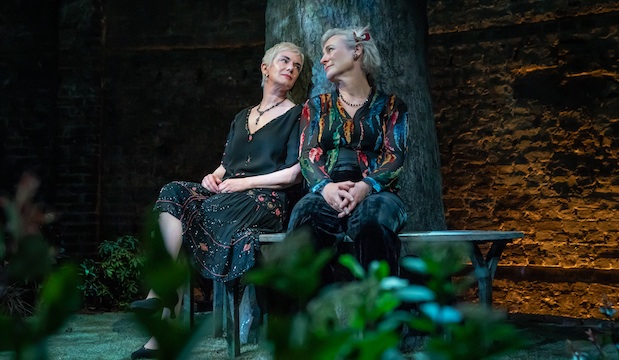 But the performances are spectacular. Hamilton is truly mesmerising, and offers hauntingly vulnerable moments that snap to sour stings instantly. And Helen Schlesinger as Katherine Sanchez, famous author and Audrey’s long-time friend, is headstrong and brisk as she falls in love with Zara. The entire cast beautifully demonstrate Bartlett’s strength at writing rich, taut, and poignant dialogue.

Albion is Goold’s first revival of an Almeida production in his tenure as the theatre’s artistic director. It was an obvious choice, given everything we’ve gone through as a nation these past few months, but absolutely the right one. Though still a young piece of work, Bartlett’s Albion has already aged into a glorious vintage with its web of big core themes (class divides, left versus right politics and grief) and speckling of poignant, on-the-money one-liners; all of which come together in a bottle just right for uncorking and glugging in 2020.

Albion is every bit the state-of-the-nation play we need right now.