Post-truth gets personal at the Almeida: Ben Whishaw stars in a new play about Silicon Valley, rockets, and self-discovery

So Luke, a millennial version of Bill Gates played with nerdy sincerity by Ben Whishaw, leaves his tech empire in Silicon Valley to solve suffering across America. Unsure whether Luke is experiencing a breakdown, a revelation, or just some billionaire's guilt, besotted friend and confidante Sheila (Amanda Hale) follows.

Over a dense three hours of stage time, Against revolves around Big Ideas about the nature of violence, hope, idolatry, and the possibility of making the world a better place. Playwright Christopher Shinn (Teddy Ferrara, Donmar Warehouse) pushes, self-consciously, to the very edge of the Zeitgeist to take us from high school shootings, campus rape cases, druggy polyamory and corporate malaise, along with reams of soul-searching about what it means to truly love. 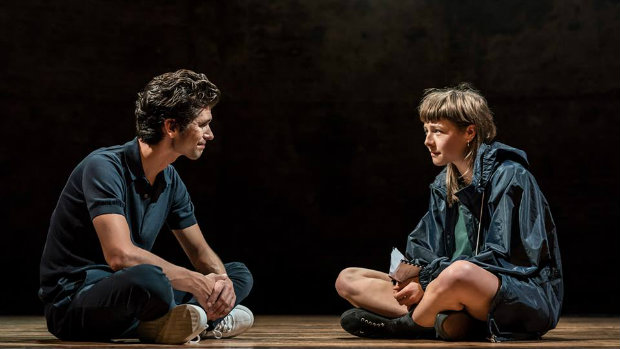 Director Ian Rickson keeps the set simple and sparse, with just an illuminated sign to indicate each location. By contrast, the story itself is rather complicated and self-indulgent. First, Luke tries to change the culture and language around violent acts, immersing himself in communities rocked by a tragedy and, with Sheila’s help, recording the stories online.

TRY CULTURE WHISPER
Receive free tickets & insider tips to unlock the best of London — direct to your inbox
In the media sensation and growing public obsession more and more demands are made on him. Isn’t the exclusion of all nonviolent matters an act of violence in itself? Shouldn’t God’s avatar on earth take time to speak to the terminally ill? Why can’t Luke open up to intimacy?

Political correctness and public pressure send the modern messiah even deeper into his soul-searching. There’s enough self-awareness in Shinn’s script and sufficient spark in Whishaw's performance to make this navel-gazing entertaining – but only just.

Occasionally, liberal hypocrisy is highlighted to hilarious effect, especially by Kevin Harvey as, first, a sex worker turned creative writing professor, and then, later, the suave CEO of an Amazon-style corporation.

The rest of the time, Against feels curiously blinkered. We hear hours of prophesying about the nature of violence, yet never get an insight into its causes or effects.

The final few scenes have a thrilling intensity that made us glad we stayed, but this is an uneven play, which pokes at issues without propelling anything forward.