Branded 'a libel on the British people' when first performed in 1952 under the title The Pink Room, Rodney Ackland’s play was panned and as good as booed off stage. Set in war-rattled London, in seedy members’ club Vie en Rose, the play presents a cast of denigrates who revel in excess and immorality.

The combination of blunt political blows, homosexuality and gleeful inhibition was more than enough to alienate and alarm 1950s society.

In the 1980s after censorship laws were abolished, the Ackland re-worked the script, keeping all the shock factor and adding references to pompous literary critics. Absolute Hell, as it was re-titled, premiered at Richmond's Orange Tree Theatre in 1988. By this stage Ackland was dying of cancer, so he never saw the show adapted for the BBC or staged at the National Theatre with Judi Dench starring. 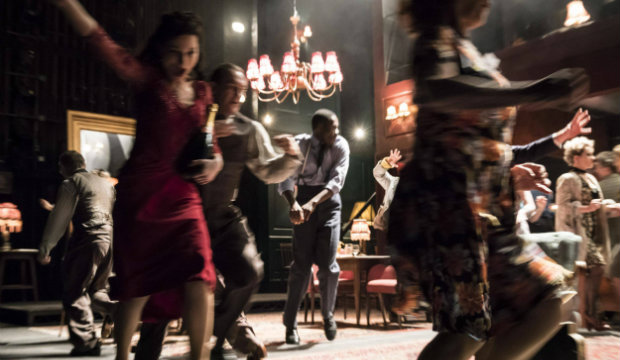 Now, under the dynamic direction of Joe Hill-Gibbins, Absolute Hell brings a rowdy ensemble of 28 actors and an excess of scotch bottles to the Lyttelton stage. It’s staged with an artist’s eye for detail and a large budget. A vertiginous set show us us both private dining room above and sleazy drinking den below. Beyond a typist busies herself with Labour Party campaigning. Intermittently a sex walker silent stalks across the stage.

Kate Fleetwood is brilliantly brittle as proprietor Christine, who eekes out each night to its dregs for fear of being left alone. And Charles Edwards is at once sympathetic and exasperating as sensitive writer Hugh.

Every nook and cranny of the stage is swilling with half-seen stories and this sense of excess is at once the most compelling and exhausting aspect of the production. Over a tonally monotonous three hours it’s hard to care for the the motley crew of degenerates and we found ourselves craving a few cuts and some sharper focus.

As the play ends, inevitably, not with a bang but with a whimper, we get a glimpse of the raw desperation beneath the rose-tinted revelry. The raucous humour and dulling reality makes Absolute Hell a strangely sobering experience. We recommend watching with a stiff drink, or three.