Jack Thorne's absorbing and atmospheric A Christmas Carol returns to The Old Vic for the fifth year, blasting away any bah humbugs

Tickets are on sale now; click here to book.

Paterson Joseph (Peep Show, Green Wing) stars as Ebenezer Scrooge, bringing both a matter-of-fact frankness and hints of vulnerability to the all-important part.

Jack Thorne, the playwright with the magic touch, has created an absorbing, family-friendly A Christmas Carol that has filled the Old Vic’s Christmas slot for three years now. It’s shorter, snappier and less gritty than other stage adaptations of Dickens’ best-known ghost story and in parts, feels a little like A Christmas Carol ‘light’: less time is spent with the ghosts, who themselves are less creepy incarnations than those you might have seen on stages elsewhere.

What this production excels at is creating atmosphere. From the moment you enter the Old Vic for A Christmas Carol there's enough festivity to blast away all the bah-humbugs. Cheery-faced carol-singers hand out mince pies and satsumas beneath a constellation of glowing orange lanterns, as the in-the-round production invites audience members into a Gothic yet gleeful Dickensian winter. 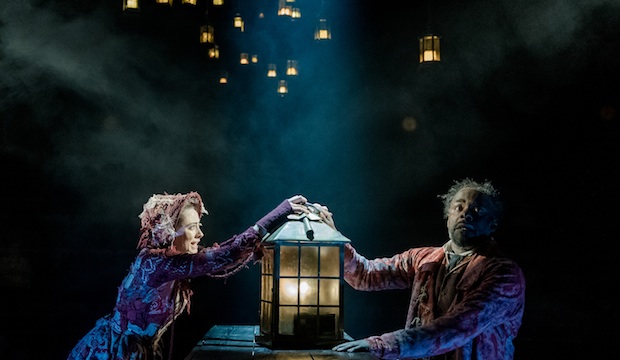 Director Matthew Warchus maintains a fine balance between comedy and morality, evoking such an irresistible atmosphere that even those (like us) who know the story far too well will be newly entranced. Carols sung a capella punctuate the story, as a chorus of narrators in top hats and tails introduce the cantankerous Scrooge and his dead business partner, Jacob Marley.

At just 50 minutes per half, Thorne’s shortened adaptation feels rushed in parts. Those who know the story well might feel keenly the absence of certain moments or wish Scrooge would linger with each ghost a little longer. The Ghost of Christmas Yet-to-Come barely gets a look in and the scene is so diluted (no looking on as his belongings are divvied up by local crooks, no peering over a grave) that it loses its gravitas. As a result, the final scenes featuring a repentant Scrooge carry less of a sense of relief.

That said, the feast with the Cratchits is truly magical and likely to spark joy in audience members young and old. It's immersive, silly and totally infectious. What’s more, Thorne’s production ends with a darker twist on the story’s denouement, ensuring its core message of compassion is not lost. In these final moments, we’re reminded that even Christmas miracles require patience, hard work and determination.

It's a fitting message, and one that is likely to leave even 21st-century Scrooges with a tear in the eye. Take all the family to remind them that Christmas cheer and goodwill go far deeper than the John Lewis advert. 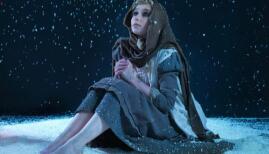