Daniel Radcliffe returns to The Old Vic in a Samuel Beckett double bill, with Endgame and Rough for Theatre II

As the planet and society are on verge of collapse, it feels timely that The Old Vic has programmed this unrelentingly pessimistic work. However, maestro opera director Richard Jones CBE has created a production that deviates from many of Beckett’s original intentions. Nevertheless, like Shakespeare or Arthur Miller's work, the text is strong enough to withstand any bells or whistles that decorate the original meaning.

'Death of the Author’ is a legitimate literary theory that can be applied to this production’s choices, but it is interesting that Beckett was undeniably averse to anyone defying his exact instructions on how Endgame should be performed. In 1984 he is quoted as saying, 'Any production of Endgame which ignores my stage directions is completely unacceptable to me… Anybody who cares for the work couldn't fail to be disgusted.'

The key to unlock Jones’ production lies with hard-core Beckett fans who have engaged with Endgame productions as Beckett intended. Jones has deliberately veered away from Beckett’s slow, flat, and metronomic performance directions (a metronome literally being used by Beckett to restrain his actors’ speech patterns and tone of voice). With that in mind, this production takes on a frisson and delight in breaking Beckett’s formal rules.


Ultimately, this enchanting cast will not leave you spellbound.

Tickets for Endgame at the Old Vic are on sale. Click here to book. 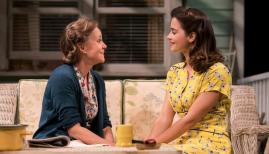 All My Sons, Old Vic Theatre