Rejoicing At Her Wondrous Vulva The Young Woman Applauded Herself, Ovalhouse review ★★★★★

Bella Heesom brings her new play to the Ovalhouse with a title to remember; hilarious and relatable, it loses its way but is well worth a watch

Heesom stars variously as ‘Brain’ and ‘Ego’ – the manifestation of a young woman’s conscious thoughts, capable of keeping inappropriate urges in check but impressionable under the weight of societal expectation. Opposite her in this two-hander are Sara Alexander’s ‘Clitoris’ and ‘Appetite’ – libidinous, improper, impatient, erratic.

Leave your prudishness at the door, in other words, and expect Waller-Bridgean breaches of taboo (Killing Eve producers Sid Gentle are already working to adapt the play for television).

One by one, Clitoris plays earnest chief inquisitor to Brain’s myths: ‘Can I see it? Can I feel it?’ she asks earnestly about the young woman’s supposedly ‘precious’ virginity. And how can boys say she smells like fish if they’ve never met her? Stooge-like, she accidentally punctures preconceived balloons with disarming ease, her inadvertent wit a repeated source of hilarity.

Rarely, of course, are the two body parts on the same page – Clitoris sex-hungry while Brain tries desperately to read a magazine, or Brain revelling for the first time in a post-sex glow, only for Clitoris to ask: why wasn’t she invited?

Playing their parts terrifically, Heesom and Alexander succeed in capturing the conflict between one’s sexual urges and the demands of the present situation, offering clever insight into why unrealistic ‘norms’ of sexual behaviour might exist in the first place. It's easy – but not too easy – to forget they belong to the same body. 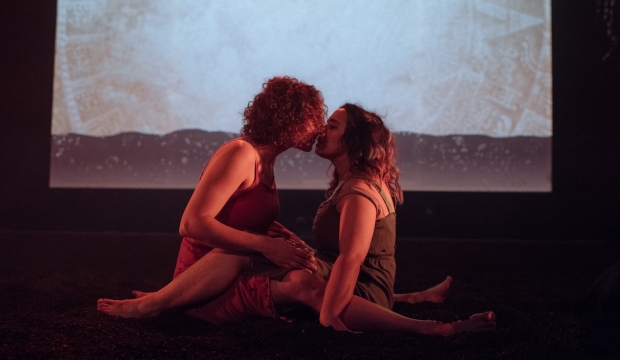 All this hearty myth-busting has to come to a climax one way or another, of course, and – at the risk of spoiling it – the show's denouement certainly grabs the attention. But as the wrapping comes off and naïve Clitoris suddenly transforms into an accomplished public speaker, the play loses some sense of coherence, sacrificing sustained narrative and character development on the altar of an oddly-timed feminist podcast.

None of this stopped the audience from erupting with applause at the end of Rejoicing At Her Wondrous Vulva on press night – and rightly so. Directed by Olivier Award-winner Donnacadh O’Briain, who worked with Heesom on her debut play, My World Has Exploded a Little Bit, this is a richly-entertaining, well-acted piece with its finger very much on the feminist pulse. Yes, it falters; but will prove relatable to anyone who watches it and certainly merits a trip to the intimate Ovalhouse.

Tickets to Rejoicing At Her Wondrous Vulva The Young Woman Applauded Herself at the Ovalhouse are available here.