He should have spent the year on Broadway. But New York's loss is London's gain... The award-winning actor talks about changed plans, a musical journey and setting up home 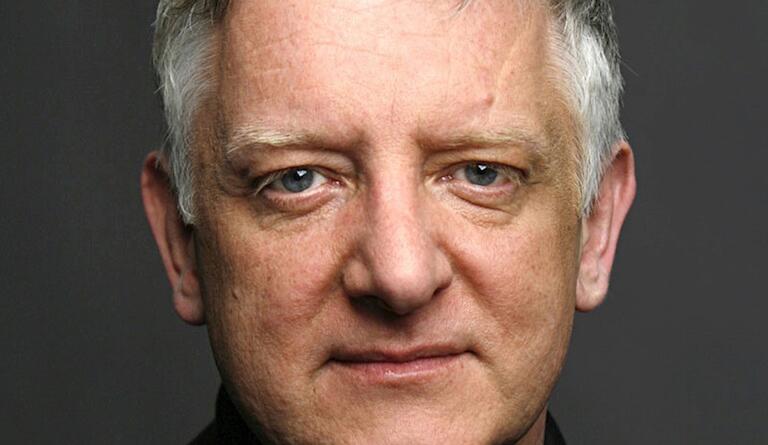 Simon Russell Beale has swopped a Broadway transfer for new London productions
Like many of us, actor Simon Russell Beale looked upon unexpected and enforced free time this year as an opportunity to broaden the mind. And he had more success than some, even though he set the bar very high.

‘When I was in [the first] lockdown, I thought let’s do Wagner’s operas!’ Given that these regularly clock in at five hours or more, he was heading for a bigger commitment than the daily crossword that was his Desert Island Discs luxury in 2007.

With a singing background before his acting career which took off in the 1980s, he had, you might think, a head start understanding Wagner. But with cheerful candour, he admits defeat. ‘I’m still not convinced, to be honest. There’s something right at the very end of the process where you think, hang on a minute, I don’t believe any of this.’

What have bowled him over instead are the true-to-life late 19th- and early 20th-century Italian operas of Puccini and contemporaries – verismo operas, with their gift for drama. ‘I also watched my friend Richard Eyre’s production of Verdi’s La Traviata, which is a masterpiece.’ While Eyre’s production, now 25 years old, is a mainstay of the Royal Opera House, the actor hopes to put dates in his 2021 diary to see London’s verismo experts, Opera Holland Park, who stage Mascagni’s moving L’Amico Fritz next summer.

That diary, like this year’s, has seen a lot of action – not all of it positive. At the time of the first lockdown the multi-award-winning actor was due to open on Broadway in the eagerly-awaited transfer of the National Theatre’s The Lehman Trilogy. But the six-month run was pulled – just at the moment when the actor had embarked on the purchase of a house in Wiltshire. 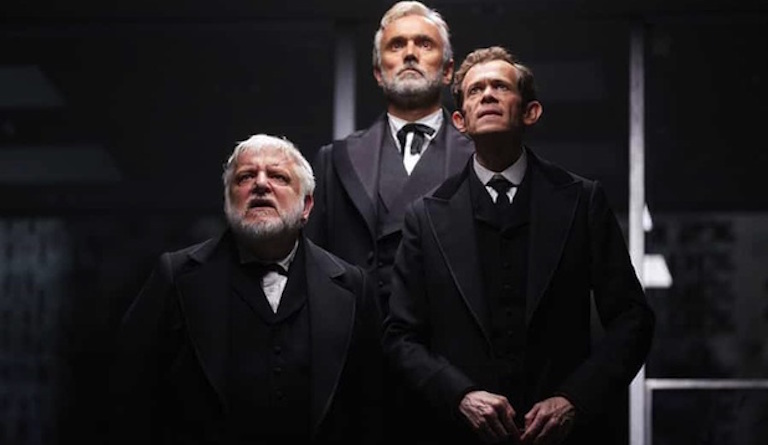 Simon Russell Beale, Ben Miles and Adam Godley in The Lehman Trilogy, which started life at the National Theatre in 2018

‘I moved out of London just before lockdown’ – his voice tightens as he draws in breath – ‘said with a slight squeak of anxiety! I love my house but moving is an expensive business. I was expecting two years of a large salary.’ The unwonted spare time and changed bank balance has awakened decorating skills – 'it's a little bit slapdash' – and a new enthusiasm for gardening. As we talk he is coming to terms with the bill for a new bathroom...

Broadway is sure to beckon again, but in the meantime there are jobs closer to home, two contrasting productions in quick succession at the Bridge Theatre – an adaptation of Dickens’s A Christmas Carol and Henrik Ibsen’s John Gabriel Borkman – and a music series streaming in November and December with ultra-refined singers The Sixteen and their conductor Harry Christophers.

His relationship with the Bridge began with a series of lunchtime musical events and others were in the pipeline, as was a Beethoven special. But A Christmas Carol marks his acting debut there, drawing on both his matchless comic timing and compelling gift for story-telling. We might not have got to know arguably the finest actor of his generation, however, had he not changed courses at the Guildhall School of Music and Drama; here he enrolled as a singer, before abandoning music as a career and switching to drama.

‘My voice wasn’t good enough,’ he admits. ‘That was the starting point. I had a sweet voice but not a good voice.’ He reels off the names of our best British-based singers today: ‘I went to university with Mark Padmore, Christopher Purves, Simon Keenlyside, Gerald Finley. I wasn’t in that league. But that’s not the only reason I changed. I really, really fell for Shakespeare.’ Looking with envy at the drama students down the corridor he faced facts: ‘I was in the wrong part of the building…’

Do the two disciplines, singing and acting, overlap? Despite his great gift for landing the comic line as an understated cadence, he is not conscious of his musical ear informing his masterly timing. And in delivering lines he is not, as it were, singing without music. ‘I’m not particularly interested in the voice beautiful. I know some very beautiful voices but I think I’ve got a rather sharp voice...’ But he does think that an awareness of musical form – he has presented a series on the symphony, and orchestral music forms the basis of his CD collection – helps with the structure and pacing of a play. As a singer he also developed early the breath control that has stood him in good stead when playing loquacious characters or, as in The Lehman Trilogy, conjuring up several figures at once. 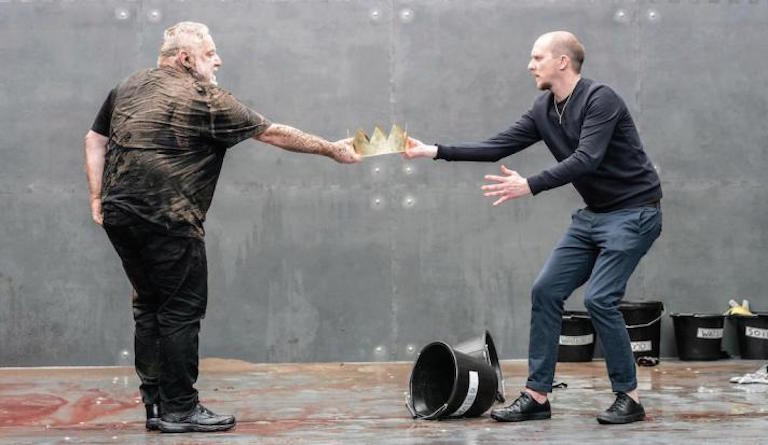 Simon Russell Beale in the title role of Shakespeare's Richard II at the Almeida in 2018. Photo: Marc Brenner

A Christmas Carol, due to open at the Bridge on 3 December, like The Lehman Trilogy, features a cast of only three, playing all the parts. Patsy Ferran, who made such an impression in Tennessee Williams's Summer and Smoke at the Almeida in 2018, and Eben Figueiredo join the fun.

‘We are using the actual Dickens text and as in Lehman we use the third person. I basically do Scrooge all the way through and I do’ – and here, switching vowels he instantly becomes a no-nonsense Cockney – ‘a char woman, a cleaning lady.’

John Gabriel Borkman, due to open on 11 February, is the story of a businessman with a past. The tense family drama, written in 1896, has taken on new topicality: ‘Weirdly, John Gabriel Borkman is about a family locked together in a house...’ Sir Simon – he was knighted in 2019 – leads a cast of seven in this new version by Lucinda Coxon, other names to be announced. Bridge artistic director Nicholas Hytner directs both productions.

Fingers crossed, there is a third appearance at the Bridge on its way. The actor is talks about a new play by the author of the award-winning Consent, Nina Raine, that looks at the relationship between JS Bach and his composer sons. Is he playing Bach? ‘Hopefully...’

Bach takes a rare back seat in A Choral Odyssey, an enterprising series of seven concerts given by The Sixteen with conductor Harry Christophers, and streamed from eye-catching locations. The musical journey has introduced less familiar music to its presenter, as it may well do for its audience. The 16th-century composer Francisco Guerrero is not a household name, but is centre stage in the programme from Our Lady of the Assumption and St Gregory, off Golden Square in Soho (25 Nov). 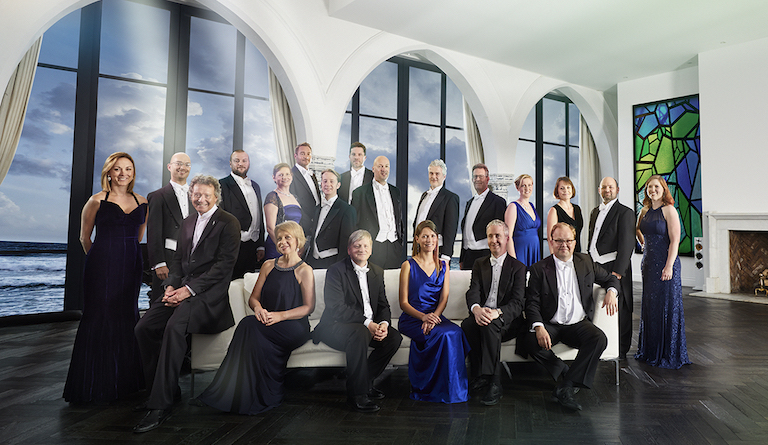 Other concerts come from the Sam Wanamaker Theatre at Shakespeare’s Globe, Hatfield House, Cadogan Hall off Sloane Square, and Penshurst Place in Kent. Asked to choose a single favourite piece, the presenter opts for the luminous Libera Nos by John Sheppard, sung in the opening programme (18 Nov) in Magdalen College, Oxford, for which it was written.

The actor’s personal musical journey started at home in Penang, where his father was in medicine, and from where he became a chorister at St Paul’s Cathedral. ‘I’m not an expert on choral music, although that was my background.

‘The bit I most love in A Choral Odyssey is when Harry Christophers takes me through the music in fairly technical details. The other thing is that I get to these extraordinary places! I feel very privileged. I love programmes that teach me things and I’m very proud of doing them.

‘Years and years ago I got to know Simon Schama, who I think is a miracle. I was doing a radio interview in New York and he was also on the programme, and I gushed all over him. In desperation, I think, he took me round the Metropolitan Museum of Art to look at the Rembrandts and I got this private tour! Visual art doesn’t come naturally to me, but I love to be taught.The Sheppard is a kind of delirious polyphonic work sung in the chapel for which it was written. If you did that in Notre Dame it would be a mush. But in Magdalen College it’s a perfect fit.’