The baritone on playing an interfering father, farming in Wales and life after Brexit 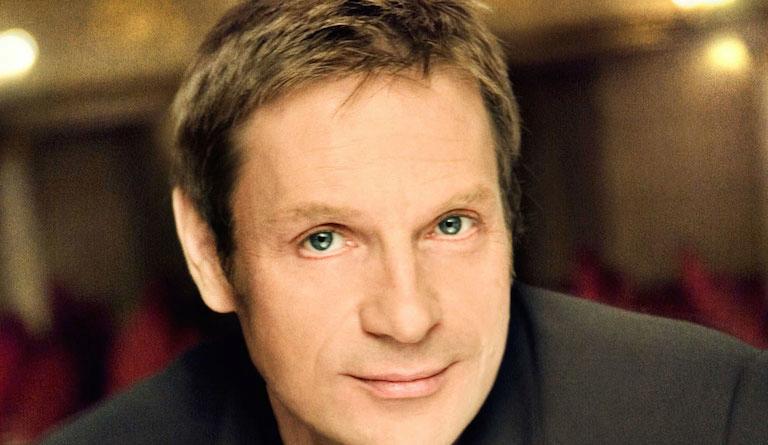 Simon Keenlyside is a popular figure at Covent Garden. Photo: Uwe Arens
In the second act of Verdi’s La Traviata, the society hostess Violetta has turned her back on fast living in fashionable Paris and escaped to a simpler life in the countryside with her new lover, Alfredo. At their rural retreat, Violetta is visited by Alfredo’s father, who insists she give up the relationship, because of the scandal it is bringing to the family, including Alfredo’s sister. The duet between Violetta and Giorgio Germont is one of the most moving in all opera, and pivotal to everything that follows.

The revival of La Traviata at the Royal Opera House this winter is a time of celebration, for it marks 25 years of Richard Eyre’s apparently matchless production, which is true to the composer and his librettist, beautiful to behold, and capable of attracting one star cast after another. On this occasion the role of Giorgio Germont is sung by the baritone much loved by London audiences as well as worldwide, Simon Keenlyside. And in one of those satisfying instances of life imitating art, Keenlyside too, despite the demands and schedule of his international career, has, like Violetta, opted for the country life.

About 20 years ago, he acquired some land in Carmarthenshire, west Wales, planting trees up to the open heather moor, near the place where he grew up, and where he now lives with his French-born wife, former Royal Ballet dancer Zenaida Yanowsky.

‘Wales is home for me,’ he explains. ‘I have an upland farm with wildflower meadows, now of regional importance and protection status. Of that I am unashamedly proud. We have planted some 10,000 trees on the smallholding. These trees and shrubs were all planted with one eye on the insect, bird and mammal species that we might encourage to come. Come they have, and the work is endless. This aspect of my life is part of the marrow in me. It occupies my mind each and every day of my life, and wherever I am plying my trade in the world.’

This environmentally vital work is a far cry from the hustle and bustle backstage at the Royal Opera House, where the couple met – in unusual circumstances.

‘I fell through an open trap-door in the stage of Covent Garden and was badly injured,’ he says, brushing away any expression of admiration of soldiering on. ‘I managed to finish the show. Do not think so very much of that action. We must sing to eat and that is a pragmatic attitude which I believe all singers take. We are all eminently replaceable. However, while waiting for the doctor to arrive, I thought that I might as well attend the sponsors’ dinner upstairs. I was hungry but could not use my hand... Zenaida Yanowsky was, and remains, an avid theatre-goer. She happened, on a day off from the Royal Ballet to attend this Magic Flute by Mozart… A number of hoops and a fair few years down the line Zenaida and I were married and have two heaven-sent children, now nine and eleven.’ 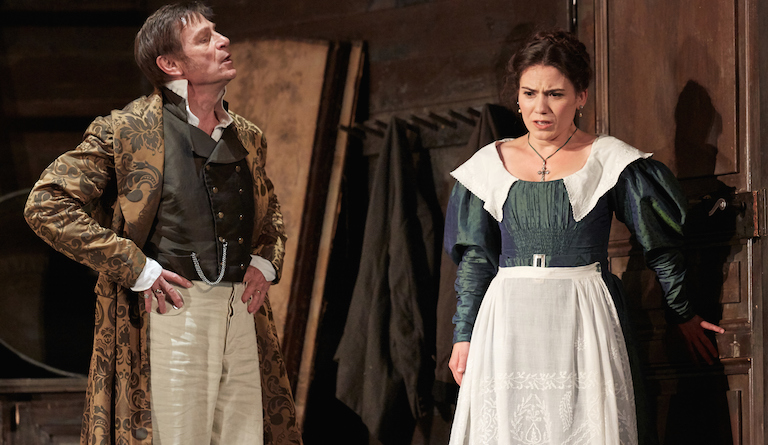 Simon Keenlyside as the entitle Count in The Marriage of Figaro at Covent Garden earlier this year. Photo: Mark Douet

Does having a son and daughter of his own, affect the way he approaches the role of the interfering father in La Traviata?

‘On a personal level, my job is neither to sympathise nor to disapprove,’ he says. ‘Instead, I think I ought to try to identify the function of the character in this drama. Two young people from different social strata, falling in love; it’s an age-old story. Eighteenth-century society might tacitly accept that a rich and powerful man has a courtesan as a mistress. For a young man of impeccable background, however, one making his way in society, it would never have been acceptable to have taken such a woman as a wife.

‘The dramatic device, as it were, of the father, my character, is to present that social straitjacket. A man who feels that, above all else, his position and his family’s standing in society – honour and status – are of paramount importance. His image of himself and how a son’s disgrace might impinge upon the family reputation, take precedence over any consideration of the happiness of a young couple in love. I don’t think he even believes that they are truly in love, in any case. But the drama drives the audience, like sheep to a pen, towards an entirely different conclusion: namely that love conquers all. That love ought to trump all else.

‘It is tempting for any actor to attempt to make his character likeable and sympathetic. I don’t feel that there ought to be a great deal of empathy for the fate of the father Germont. Most modern audiences have little time for a father who sacrifices the happiness of his son for the sake of family appearances.’

Germont’s role is important but not huge. Does that bring its own challenges?

‘Physically, all the role will bring me is a sore back from standing ramrod-straight for weeks on end. But if you believe, as I do, that the greatest joys in art (and life) are in the details, then the role of the Father is still fascinating in all its minutiae. Vocally I will never tire of it. I use the part as a yardstick for how my voice is behaving.’ 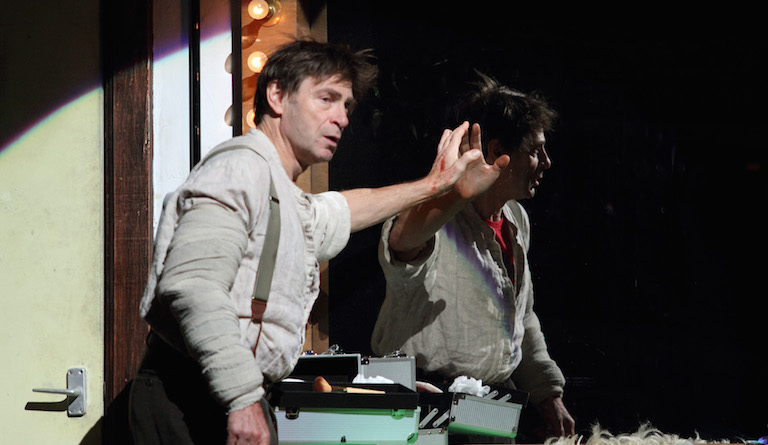 Tonio in Pagliacci at Covent Garden in 2017, Simon Keenlyside made his 1989 debut in the opera. Photo: Catherine Ashmore

That voice, and the singer’s notable acting skills, have graced the stage of the Royal Opera House for 30 years, beginning with a role in Leoncavallo’s Pagliacci, and singing ‘at home’ has its attractions.

‘To sleep in one’s own bed and travel to one of the worlds great temples to music is especially thrilling. That delight never wanes – nor the anxieties that attend it! This is a Gypsy life and we all live on the road for decades. We get sick; occasionally injured, and cannot earn a living. The salient feature of all that, however, is not for how long one is out of play, but how quickly one can return to good health and good singing.’

Like many parents Keenlyside and Yanowsky keep an eye on their children’s own artistic development, but are at pains to keep life down to earth.

‘Neither of us wants to hot-house them, either in dance or in music. In fact I would be horrified were either to express a desire to sing – not unless they told me that they cared nothing for what I thought, and that they were going to do it whatever ! Then I might smirk inside,but I would not show it. They learn the piano: we consider that as much a core subject as maths or English. They can dispense with that as soon as they are out from under our care and control. As it happens,and in general, both our children like music and moderately enjoy playing. Practising? Now that’s another matter!

‘Zenaida, until this year a Prima Ballerina at the Royal Ballet, does the lion’s share of the work at home. We hang on for dear life to the routines of everyday life. I’m sure this no different for any working family. The kids have been to more than their fair share of ballet and vocal concerts.’ some day!’

Now 60, for many years Keenlyside has been the ‘go-to’ Billy Budd, an energetic young seaman clambering around the deck in Benjamin Britten’s opera of the same man, looking for all the world like a man in his 30s. ‘To keep myself in some reasonable shape is important to me. But I think one can take this too far. There is no need to present oneself as Superman, on stage…

Modern audiences do demand that we, tidy ourselves up sometimes. I see no harm in that . Frankly the reputation of all opera singers as being grossly overweight is wholly unjust and wrong. I would say that the presentation of the human form in Hollywood movies is far worse and less representative too. Supposing that every person on the planet were beautiful and svelte! I need to work at physical issues, on account of the sheer number of physical injuries I have sustained throughout my life, on stage and off. I also find it enjoyable to be able to live an active life in the mountains and forests – at home on the farm in Wales, and with two young children – and not have to worry that I will be exhausted when I return to work the following day.’

Our conversation takes place against the backdrop of the general election. For an international performer, Britain’s future relationship with the rest of the world is critical. 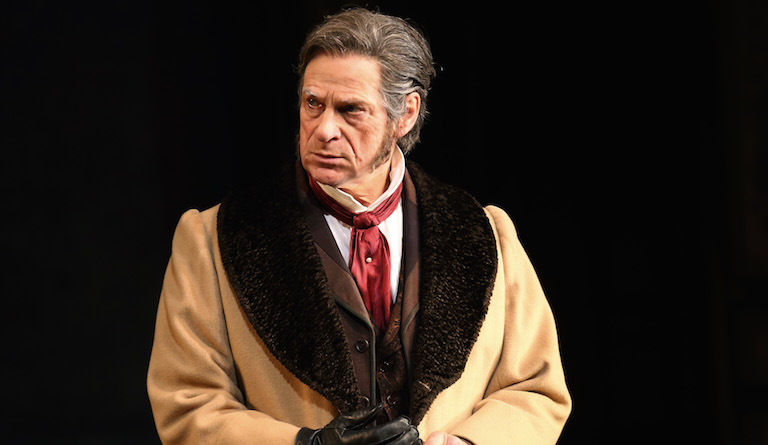 ‘I feel great sadness for the cutting of the European umbilical chord. For all the British youth who will now be denied the equal rights and opportunities afforded all young people in Europe, until now. Frankly, it saddens me more than I can say. I have taken Irish nationality, as is my right. I am absolutely a European from top to toe. The wonderful melange of cultures and people has nourished me and made me what I am. My art form is utterly international.

‘The peace and prosperity which has been afforded my little round and gentle life, was bought so dearly in the lives or so many other allied nations of Europe and the world. Those who stood shoulder to shoulder to protect these islands: these beautiful freedoms in which we have thrived. When I hear the rhetoric about Polish people in particular, a nation who played such a crucial part in protecting this nation a mere 19 years before I was born, I wonder how on earth it is that we do not guarantee the rights of their children and grandchildren to remain here by right, and with our deep gratitude. It is for me a source of great shame, this Brexit.’

In turbulent times, small wonder that the generosity and beauty of this ROH classic La Traviata is still drawing audiences 25 years on. Indisposed for its most recent run at the Royal Opera House, Keenlyside is rearing to go.

‘There can be no stopping singing for me for the foreseeable future,’ he says. And that’s the best news music-lovers have heard this year.