Clint Dyer and Roy Williams return to the National Theatre with Death of England: Delroy, an unflinching examination of being a black working-class man in Britain

Death of England: Delroy has, sadly, been forced to close immediately to comply with the second lockdown, but will be made available to stream on the National Theatre’s YouTube channel soon.

Set in London, 2020 (planted firmly in the present by references to Covid coughs and Zoom calls), and in the wake of George Floyd’s murder and the subsequent Black Lives Matter protests, Death of England: Delroy picks up where the first story left off.

Taking over Sadeysa Greenaway-Bailey and Ultz’s raised cross stage from Michael, Delroy is reeling from the outburst of racial abuse hurled at him from his best friend who, under the guise of grieving for his recently deceased father, professed: ‘You might act like us, you might sound like us but you will never be one of us, and deep down you know it.’ 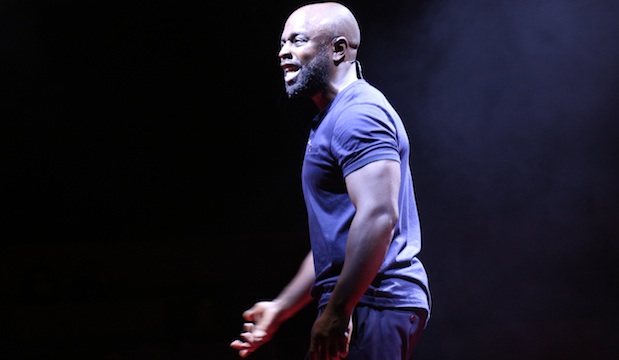 We meet Delroy at the end of his tether, when a fuse has been lit. He’s an innocent man arrested in a racial profiling incident on one of the most important days of his life: the birth of his first child. But as painful and terrifying as it is being physically and verbally abused by those in positions of authority, racial attacks cut much deeper when coming from those he loves, including his partner, Michael’s sister Carly.

What follows is a 90-minute outpouring of anguished rage and wild-eyed philosophising on the deep injustices and resulting crises of identity black Britons experience at the mercy of their casually or explicitly racist white counterparts.

The bubbling pressure cooker finally explodes in a courtroom scene where, with Rule, Britannia! echoing nightmarishly in the background, it becomes clear just how unfairly the odds can be stacked against black men facing the British justice system, where a guilty-until-proven-innocent attitude can still prevail.

Hope for a better, fairer future comes later in the form of a baby; its multiracial genes offering both sides an opportunity to learn, forgive and overcome racial tensions. 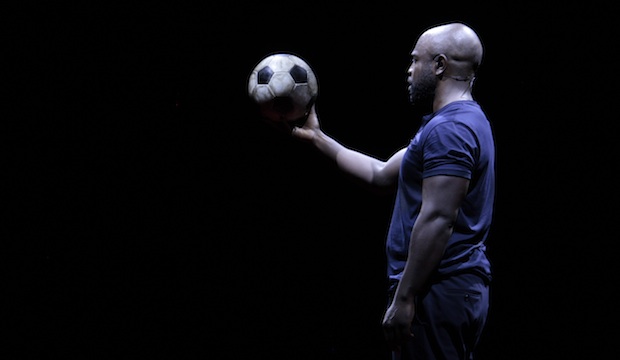 Death of England: Delroy is a searing, unflinching confrontation of Britain’s inherent racism problem. With wordsmiths Dyer and Williams behind the script, the monologue is poetic, acute and authentic. It offers captivating storytelling and, as is a hallmark trait of Williams’ writing, presents us a character with whom we can’t help but sympathise. Delroy’s justified rants are softened by punchy, witty gags, which make him hugely likable.

The piece is delivered in a furious, powerful performance by Balogun, whose National Theatre credits include Macbeth and touring productions of Barber Shop Chronicles and People, Places and Things. The performance is all the more impressive given Balogun stepped into the role a few short weeks before the show opened, when Giles Terera (Hamilton), who was due to star as Delroy, had to step down to undergo emergency surgery.

‘There have been other moments in history when the opening night is also the closing night,’ pointed out the theatre’s artistic director Rufus Norris, whose pre-performance speech on press night was met by thunderous applause from the audience. Still, it’s bittersweet to witness such a feat of theatrical storytelling, knowing it won’t receive the full live run it deserves this time around.