The bass-baritone on playing seven roles at once, music for youngsters and climbing Kilimanjaro 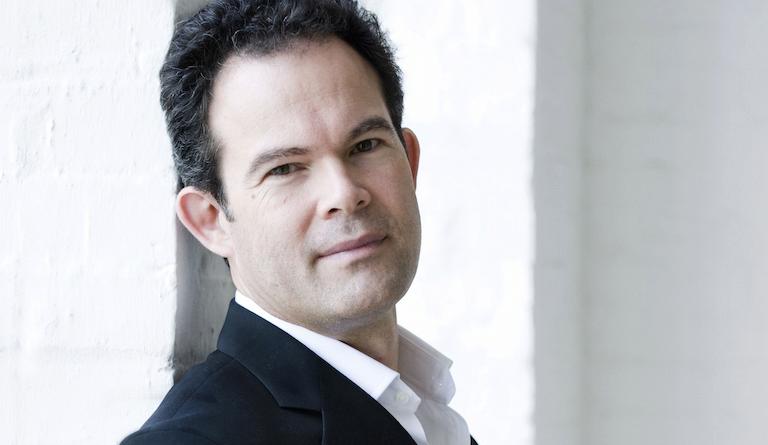 Gerald Finley returns to the Royal Opera House in Death in Venice
A rack of gentlemen’s coats and women’s elegant gowns in the corridor outside Gerald Finley’s spacious dressing-room at the Royal Opera House is marked Quick Change Rail. And quite a few of the outfits bear his name. For in Death in Venice, the baritone sings not one but seven roles.

Benjamin Britten's opera, based on the novella by German writer Thomas Mann, is being directed by David McVicar in a new production at Covent Garden, an exciting prospect both for fans of the opera and of its three principle singers: Finley, the tenor Mark Padmore and the counter-tenor Tim Mead.

As old friends in the music business, this is 'a coming together of brothers', says Canadian-born Finley, who studied at King’s College, Cambridge, and in London at the Royal College of Music and National Opera Studio.

He cut his teeth at Glyndebourne, breaking out from the chorus to get his first solo line: ‘La cena é pronta’ – ‘Dinner is ready’ – in Verdi’s La Traviata. Now he is celebrating 30 years as a Royal Opera House artist, and even with his 60th birthday approaching in January, he has new roles in his sights, and, coming full circle, says: ‘I would love to do more Verdi.’ 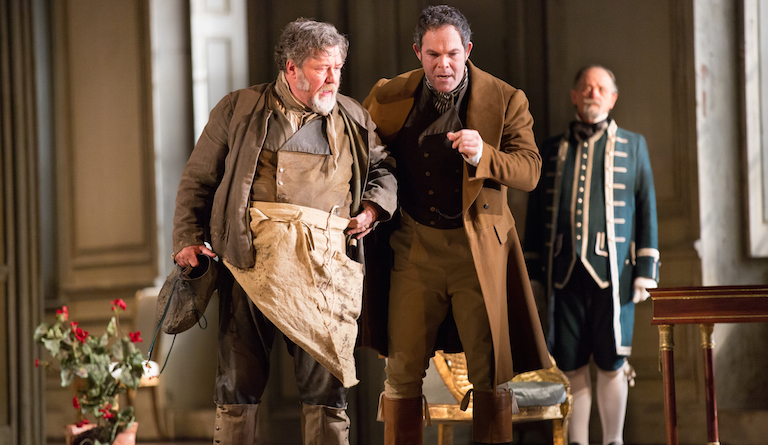 But for now, it’s the Quick Change Rail and his many roles in Death in Venice, in each of which he acts like an inner voice for the ageing writer Gustav von Aschenbach (sung by Padmore), throwing up temptations and challenges. First as a traveller, then an elderly fop, a gondolier, the hotel manager and hotel barber, an actor and, finally, a character in a dream, the many faces of Finley are hard to miss.

With red hair and peculiar facial features, each man has something in common. ‘There’s a central thread of the characters of being perhaps a portent of death or of being the impulse of another person to do something against your normal trajectory.

‘Aschenbach is provoked and antagonised by each of these characters. My job is to needle him to act in a different way. He’s always unnerved by my character’s stare. In each character Aschenbach is finding something that he has to confront. For instance, the barber gets him to regain his youth through his cosmetic change.’

Aschenbach, a fastidious admirer of all things beautiful, becomes transfixed by a lovely boy, while attempting to shake off his writer’s block in Venice. Confused and ultimately feverish with illness, his mental state is reflected in what the audience will see. ‘What I like about the production itself [ design by Vicki Mortimer] is that there’s a sense of swirl. There’s a reflective floor so you are never sure where the ground or the horizon is, because it disappears into a seascape at the back, and that sense of floating is all in his mind too. 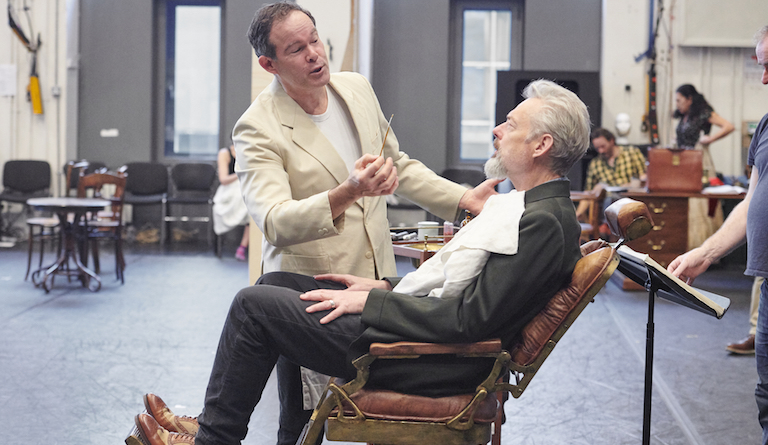 In one of seven roles in Death in Venice, Gerald Finley suggests a make-over for Aschenbach (Mark Padmore). Photo: Gavin Smart

The Quick Change Rail will be in constant action, ‘But I think the total music I get to sing is 25 minutes!’ Fortunately for those who want to hear more, Finley returns to sing the US government official Sharpless in Puccini’s Madama Butterfly in 2020. This suave character again contributes to an ultimately tragic ending. Tied by the conventions of diplomacy he does not intervene when a US naval officer proposes to throw over his young Japanese wife in favour of a ‘real’ American bride.

‘Being Sharpless is a little bit like being in the audience, because although you are on stage you’re not allowed really to guide things in a way that you influence the action of the drama. I have known diplomats who have had to hold in what their emotion really is.’

Doing something to make a difference, on the other hand, underpinned Finley’s ascent of Kilimanjaro in 2015, with his two adult sons, personally raising some £7,000 for the charity Help Musicians UK. Full of praise for the Tanzanian guides who assured his safety on the climb, at the 19,000ft peak at sunrise he sang the first lines from the aria in Wagner’s Die Meistersinger that celebrates human achievement and expertise. ‘These porters were masters of what they did.’

That admiration for creative excellence in all its forms underpins his respect for other artists, notably, recently, Simon Russell Beale, Adam Godley and Ben Miles in The Lehman Trilogy. In visual art Canaletto has been a favourite, and Turner.

Now with a four-year-old daughter he is involved with the Incorporated Society of Musicians’ campaign for more and better music education in schools, and for the inclusion of music in the EBacc, from which it is currently excluded. Like Hans Sachs, a favourite role, he believes in the transformative power of beauty. ‘I’ve espoused the idea that we can all make small differences wherever we go. Hans Sachs engages his community in a way that challenges their thinking and sometimes it comes out right in the end.’ 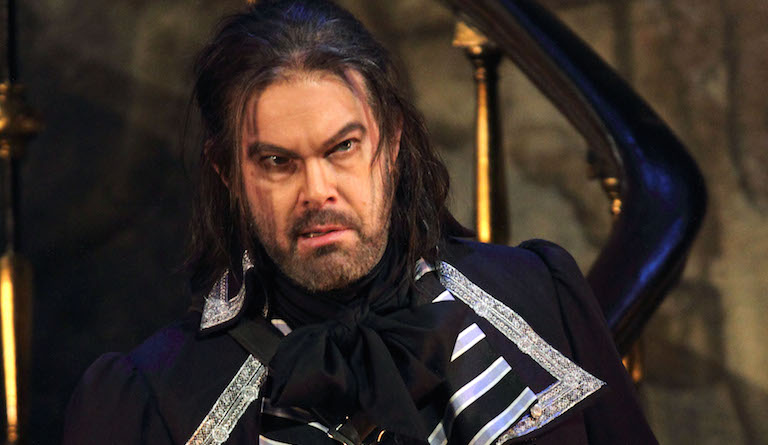 'I still have more villains to play...' Gerald Finley as Scarpia in Tosca at the Royal Opera House. Photo: Catherine Ashmore

Family goes too, from time to time, when Finley sings outside Britain, notably to Canada and his roots. But with a house and huge garden in Tunbridge Wells, singing with the Royal Opera means only a short train ride home after work, and 30 years on Covent Garden has a special place: ‘They’ve entrusted me with the development of my career.’

His first role in 1989 was Flemish Deputy in Verdi’s Don Carlo, and a host of prime roles for the bass-baritone voice have followed: Count Almaviva in Le Nozze di Figaro and the title role in Don Giovanni, both by Mozart, Alfredo’s interfering father Giorgio Germont in La Traviata, and a chilling chief of police Scarpia in Puccini’s Tosca. ‘I still have some more villains to play...’

Of course, it hasn’t always gone as planned. On one occasion his voice went at the end of second act when he was singing the title role of Tchaikovsky’s Eugene Onegin and he continued to walk the role while his cover sang from the side of the stage. Then there was the time when the set seized up in Don Giovanni, and the rest of the opera was sung in front of the curtain.

‘Everybody in the audience stayed and it was a lovely evening. It was spontaneous, but this is a bit of a circus. Everyone wants that high-wire act.'

Death in Venice runs at the Royal Opera House, Covent Garden, from 21 Nov to 6 Dec. Madama Butterfly runs from 22 June to 17 July 2020
Share: