The Italian director on discovering opera, slipping on banana skins and introducing children to the best 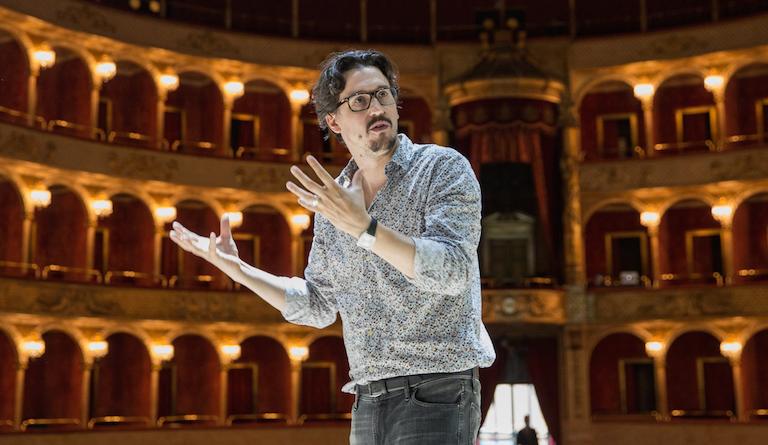 Damiano Michieletto in rehearsal. His Don Pasquale is at the Royal Opera House
What was your first opera experience? Maybe it’s still on your to-do list, but you might imagine that for an Italian director, opera was absorbed with his mother’s milk.

Damiano Michieletto, who has already made an impact at the Royal Opera House with Rossini’s Guillaume Tell and the much-loved ‘Cav and Pag’ – Mascagni’s Cavelleria Rusticana and Leoncavallo’s Pagliacci – is now tackling Donizetti. But he was far from born to it. ‘Everybody has a different way to arrive at opera, especially directors,’ he observes during rehearsals for the comedy Don Pasquale.

‘If you’re a singer, there’s a more precise way. I was not an opera lover or an opera-goer. I discovered opera during drama school in Milan when I started working with children. By working with singers I discovered the opera repertoire. But what at the beginning seemed old-fashioned and not related to our life and not connected to our society proved to be the opposite. To me opera is really powerful and emotional.’

His own first big-ticket choice was influenced by his theatre background, driving to Aix-en-Provence to see Peter Brook’s production of Mozart’s Don Giovanni, conducted by the great Claudio Abbado. A passion for drama and good story-telling underpinned his work with children early on, and his work for adult audiences now, as anyone will confirm who has seen in his wonderful ‘Cav and Pag’ small-town life and relationships, rent asunder by two disastrous love affairs.

Damiano studied drama in Milan and had no opera at home, just a little amateur acting. ‘Then, in the countryside in the summer one year, I was 18, it was quite boring. And I went to see a Commedia dell’Arte play and I was captivated. Everyone was laughing in this small village. I remember very precisely.’ 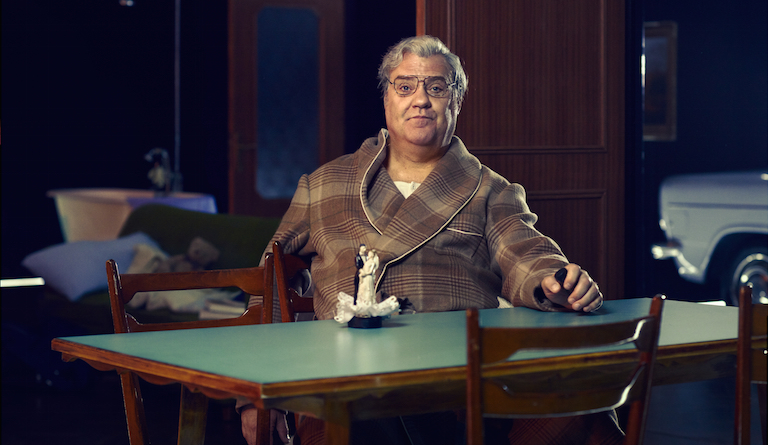 Bryn Terfel is bamboozled in the title role of Don Pasquale at the Royal Opera House. Photo: Gavin Smart

Commedia dell’Arte is the basis of all the clowns in Shakespeare and Elizabethan theatre and is fixed on very specific types. Among those types are the jealous older man, the young woman he pursues and the young man who wins the day. These characters are at the heart of many comic operas too, among them Don Pasquale.

Bryn Terfel, more familiar to audiences hitherto in his career for his grand stage presence – most recently at Covent Garden he played both the powerful chief of police in Puccini's Tosca, Scarpia, and the title role as the flawed czar in Mussorgsky’s Boris Godunov. To see Terfel being made a fool of will be a new sensation, and the role was something Terfel was relishing when he spoke to Culture Whisper earlier this year. Laughing at life imitating art, he was himself about to marry a woman 20 years his junior, the harpist Hannah Stone.

Although Don Pasquale has already been seen in Paris, with this new cast and venue Damiano is directing the London performances himself, rather that delegating to a revival or assistant director, and has made some changes.

‘I decided to be here from day one, as if it was a new production. I’m changing a lot of things and improving the show. I really want to thank the Royal Opera House which gives me the possibility to make these changes which means economically they help the show; they have to spend some money. I was really supported by technicians and all the house, and now it’s a new show. To this beautful new cast I said: 'Don’t look at the video! Don’t think you are copying something. That is the death of theatre.’

In Don Pasquale, the lovesick older man (Terfel) hankers after beautiful Norina, who is secretly in love with Ernesto. Young love finds a way, of course. Finding the comedian in Terfel has been fun in itself. ‘It’s the first time I have met Bryn, and he’s an artist I admire, and as a comic he is doing very well. He doesn’t have the Mediterranean gesture: you can feel that he’s Anglo-Saxon. Basically he’s more pragmatic. And he’s huge! His energy is just out there. 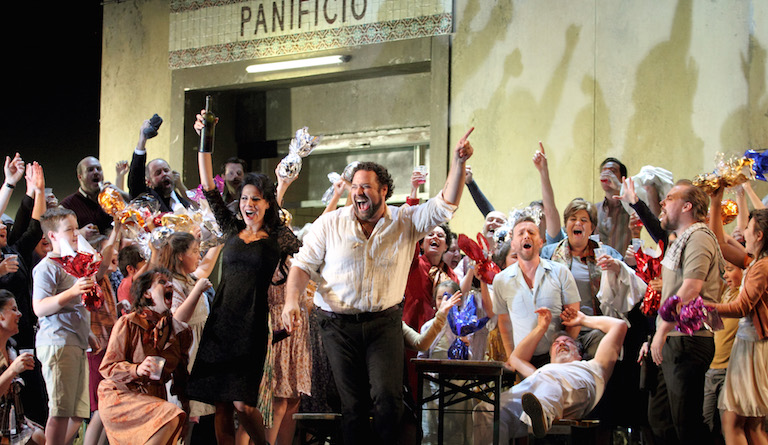 Damiano Michieletto's award-winning Cavelleria Rusticana returns to the ROH from 11 April to 2 May. Photo: Catherine Ashmore

‘I invented a character, the tiny housekeeper of his house, and the two together are comical. But the rule of comedy is there has to be a winner and a loser, the slip on the banana skin. You need a victim!’

Donizetti wrote the score in ‘not more than two or three weeks’, but it has entertained audiences for generations. This production has a modern set by Paolo Fantin and costume designs by Agostino Cavalca. 'Costumes and sets are like a trampoline. Or they just open a door, but you have to find the way to deliver emotions, otherwise you have just a picture, a painting.’

Damiano’s sense of the visual is currently seen in a production of Rossini's Il Viaggio a Reims, being staged at several continental houses and at the Bolshoi Theatre in Moscow, in which characters step out of famous paintings such as Velazquez’ Las Meninas or Freda Kahlo’s self-portrait, until they coalesce into another famous painting. Fingers crossed we see it in London one day….

‘For me the future is not about doing another La Traviata or La Boheme but creating new steps. Tradition can drag you down. Recently I saw Alexander Raskatov's A Dog’s Heart [also staged at ENO in 2010] and George Benjamin’s Written on Skin. We really underestimate the role of the writer. Some composers wrote their own libretto and this is a disaster. In the 20th-century the libretto was so bad that the problem with the opera is that the story-telling is very cheap. But if you look at those operas that have become part of the repertoire they have great story-telling: Benjamin Britten – great libretto, Richard Strauss – great libretto, Janacek…'

Looking to the future of opera, Damiano wants to see something of a deluge of composition. He has the vast Italian repertoire at his feet. But these crown jewels of opera only glitter when lesser stones have been eclipsed. Lots and lots of opera is what we need in order to pan for gold. 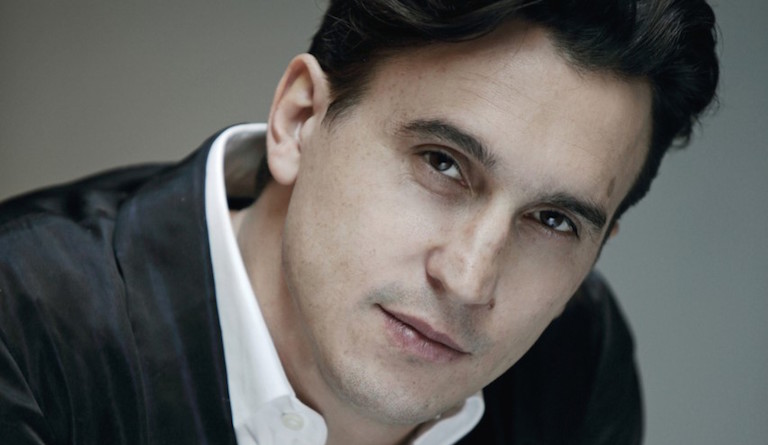 ‘So if I was the God of opera I would stage, yes, Donizetti, Verdi, Rossini, but also really take responsibility to produce opera for today, that maybe would not last, but which sow a seed. In the 20th-century there were 100s of operas written and then you and take the best when there is a lot on offer, like in cinema. But if there are only two chances in your life, you think you have to do a masterpiece. Then you cannot serve opera, you are spoiling it, only preserving it.’ Don Pasquale is Donizetti’s 64th opera. No wonder he knew what he was doing.

While here in the capital Damiano Michieletto goes to everything he can, exhibitions and performances alike: Faith, Hope and Charity at the National Theatre, and Matilda. ‘The first day I arrived I make a list and go to this, this and this. Still on his list, The Doctor and Olaf Eliasson: In Real Life at Tate Modern. It's really important to see to other work.’

‘Through the arts you get the opportunity to be a better person. Your eyes and ears become more sensitive. I think today technology is more about speed, but faster does not mean better. So we are a bit anxious about being connected, but it is not a better life, it is just a faster life. Theatre is not a faster life. You have to be there, two hours.’ And that goes for the youngest audiences too.

‘Don Pasquale’ is at the Royal Opera House, 14 Oct to 2 Nov, a co-production with Opéra National de Paris and Teatro Massimo, Palermo. It is screened at cinemas in London and worldwide, 24 Oct