Bass-baritone Bryn Terfel on villains and buffoons, an impending marriage, and hanging up his Hans Sachs boots 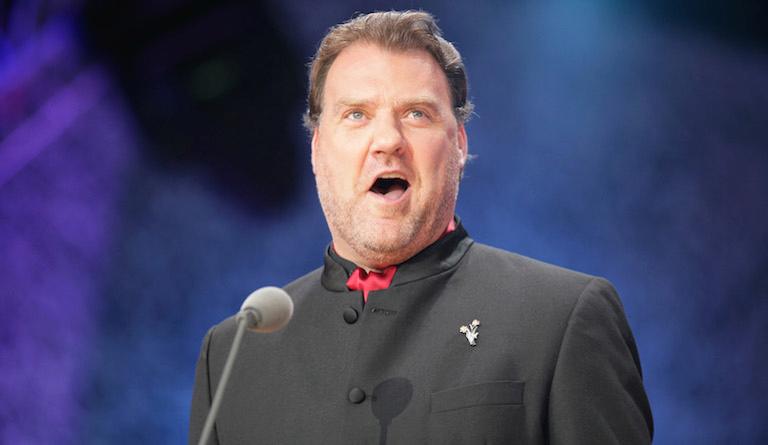 Bryn Terfel is singing two roles back to back at Covent Garden. Photo: Nigel Hughes
Sir Bryn Terfel, a towering presence in the world of music for 30 years, is rebelling – against himself. ‘I’ve broken a rule really,’ he admits to Culture Whisper between rehearsals at Covent Garden, ‘because I’ve always said to myself not to do consecutive operas in the same opera house.

‘But this is the Royal Opera House, and I love this place, and so I’m going to be greedy and not let anyone else steal Scarpia again and Boris Godunov.’

These two major roles, one the villain of Puccini’s highly-chargedTosca, the other the title role in Mussorgsky’s operatic portrait of a czar, are among Sir Bryn’s many calling cards, and perfect for his famous vocal and dramatic skills.

He has turned down the double before, but relented for Covent Garden.

'But this is the Royal Opera House, and a house with a wonderful team, and they’ve worked out a schedule that’s not too taxing. They are two roles that are similar in the vocal category.' 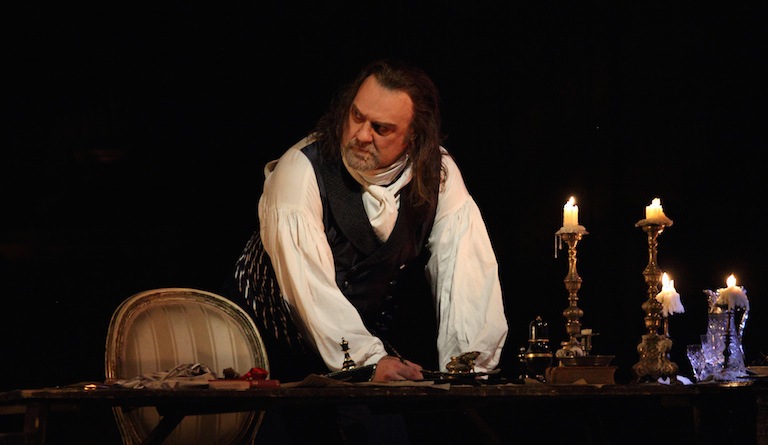 Until now he has turned down chances to sing two operas back to back. Apart from any other consideration, that’s too long to spend away from home – which is Penarth in South Wales. ‘Normally if you did do a second opera it would mean that you are away for three months each, and if you are abroad at the Metropolitan in New York or La Scala, Milan, or Paris it’s nearly half a year.'

The call of home is particularly strong at the moment as he prepares for his wedding this summer to harpist Hannah Stone, 20 years his junior. They met five years ago doing a television special, and he was simultaneously knocked out by her glamour and the skill with which she negotiated this most complex of instruments. ‘How do harpists do it? – 47 pedals and seven pedals! I’ve got two vocal chords...’

The couple have a two-year-old daughter, Lily ‘this wonderful little girl who makes me smile every day’. Terfel also has grown-up sons, two at work, one finishing at school this summer. Each have had a solid musical education, in which he passionately believes.

‘My three boys went to the same school as I did and my brother did, and he was a PE teacher there. It was a school keen and eager for pupils to compete in the Eisteddfods. And it’s for parents to take children to things outside school hours.'

His own happy and lively childhood, growing up on a farm in Snowdonia, North Wales, with his brother and Welsh-speaking, music-loving, parents, was very different from life in London. ‘Singing was something that my parents ignited a passion. I wouldn’t be where I am if it wasn’t for my parents and their support and constantly fetching us to competitions at weekends, to north, south, east and west.’ 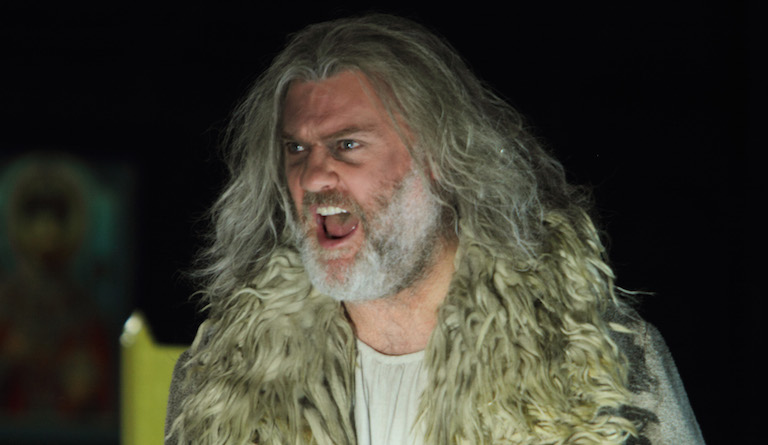 In the title role of Boris Godunov, Bryn Terfel plays the czar presiding over a troubled land. Photo: Catherine Ashmore

His Welsh upbringing made him the perfect guest artist recently at St James’s Palace for a concert given to an invited audience to celebrate 50 years since the investiture of Prince Charles as Prince of Wales. Terfel sang Wagner, which is a favourite of Prince Charles. ‘To celebrate such an inauguration is stunning, and his connection with the Royal Opera House is so important’.

When Terfel first arrived at the Guildhall School of Music and Drama in the 1980s, as young man alone in the Barbican, which was then ‘a little bit of a ghost town at weekends’, he threw himself into London cultural life for company, a practice he has never lost. The first opera he heard was Zeffirelli’s production of Otello at the Royal Opera House. When schedules allow, he still scoops up exhibitions, plays and shows – most recently, Man of La Mancha at the Coliseum.

But there will be little time for sitting in the audience over the next few weeks. After the schools matinee of Tosca (‘I hope they boo Scarpia’), he opened to a rapturous reception with co-stars Italian-born tenor Vittorio Grigòlo and Latvian soprano Kristine Opolais, his Italian pronunciation shot through with the venom of the unscrupulous chief of police he portrays.

‘It’s a role that I don’t sing so often, Scarpia, so I relish the challenge when I do get back to it. As Tito Gobbi said, the historical element is so important with Scarpia, what he wears, how he walks, how he treats his staff, the power he has and the way he wields it.’ Anyone lucky enough to see it will witness a multi-layered performance that seethes with menace and, at one level, surprising insecurity.

‘This production is considered traditional [it dates from 2006], but if you’re singing Scarpia in Berlin or Vienna there are productions that have been going since 1956! The audience there goes to hear the singers; they know the production. In Vienna they’ve seen every performance by every singer. But the Royal Opera House is the top opera house in the world. Without a doubt.’ 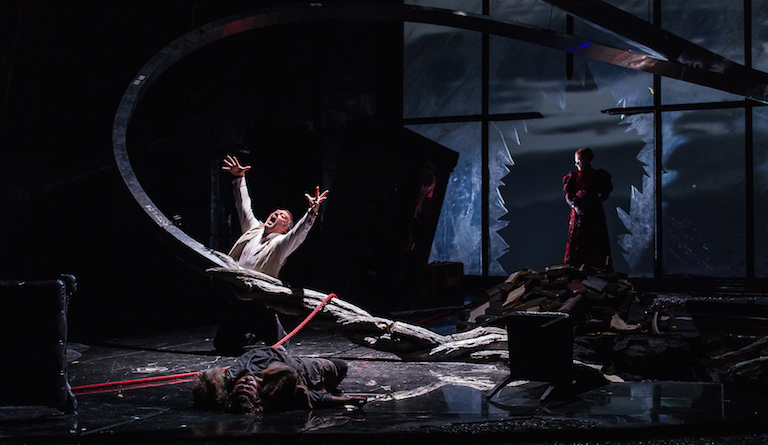 Bryn Terfel as Wotan in Die Walküre at the Royal Opera House in 2018. Photo: Clive Barda

Once his Scarpia reaches his sticky end for the last time, for now, Terfel moves on to Boris, and another troubled period in history, and something of a musical marathon for singers and ticket-holders alike.

‘We’re doing the shorter version of Mussorgsky’s opera, which means that the audience doesn’t get a break. They have to sit there for two and a half hours listening to this glorious Russian music and this incredibly troubled czar who had probably the most difficult tenure ever after Ivan the Terrible ... hunger, crops being destroyed. He gave them houses, he even gave them gold.'

Languages have been important to him since childhood. Welsh-speaking at home, he acquired English later. As a singer he works on his pronunciation constantly. Before we meet backstage at the Royal Opera House, he has had an hour and a half's Russian coaching for Boris Godunov.

‘Russian is not like Italian or French, where you can correct yourself to a certain point. You’re totally in the hands of your coaches. Russian has probably more vowels [than romance languages] and flipped ‘r’s and hard ‘l’s, and those are things you have to get precise.

Terfel has always alternated heavyweight roles with lighter parts. ‘It’s great to have so many colours in your palette’. And so next for the Royal Opera House comes Donizetti’s Don Pasquale, his debut in that comic role.

But there is a shock in store for some opera-lovers, especially those who, like Prince Charles, associate this big-bloomed voice with Wagner. The longest role in the repertoire, and one with which he has become associated over the years, the wise Hans Sachs in Wagner's Die Meistersinger, is one that Terfel says he will sing no more.

‘I’m hanging up my Hans Sachs boots. I’ve chosen now in the next four years to concentrate on new things, like Pasquale. Meistersinger is not in my calendar for four years, and I would be 58 then, and that’s maybe a little bit too late.’

'Of all the opera buffa Don Pasquale is considered one of the funniest.' In it, a jealous old bachelor interferes when his nephew decides to marry, and of course that backfires. Terfel is aware of the irony of this, but luckily, life does not always imitate art: ‘It’s a real lesson for an older man to marry a younger woman. Which I’m going to do in July...’