Faced with an increasingly leaky roof, an absent council and property developers lurking at the door, volunteer Hazel runs a food bank in a deteriorating community centre for those most in need. Ex-prisoner and new recruit Mason arrives to lead a choir after hot lunches are served. As the frontliners of the food bank, Hazel and Mason not only wade through their own hardships with permanent smiles, but also try their upmost to buoy up those around them, taking on their community’s difficulties as their own.

Over two-and-a-half hours of ensemble drama, each character is given time and space to air their story, their despair and importantly, their optimism. The show is impeccably cast, creating an honest, diverse and brutal depiction of what life is like for people who cling on to hope when the walls are crumbling around them through no fault of their own. 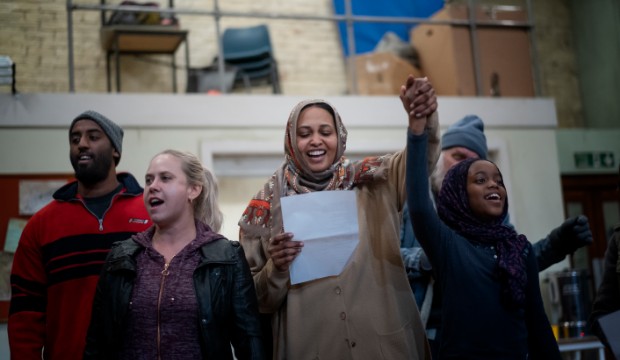 Dorfman Theatre resident actor Cecilia Noble (most recently in Nine Night and Downstate at the NT) is perfection as the put-upon but ever-empathetic Hazel; she is the glue holding this dilapidated refuge together. A grounded, endearing, laugh-out-loud performance emanates from Nick Holder as choir-leader Mason. Susan Lynch as young Irish mother Beth turns on a dime from oozing desperation to creating cheerful chaos. Bobby Stallwood is devastating as Beth’s 16-year-old son Marc, who bears the taxing responsibilities his mother cannot in order to try and salvage Faith, his four-year-old sister, from the care system.

Zeldin’s nuanced text and subtle direction is the foundation from which this ensemble flourishes. Every choice Zeldin makes comes from a place of consideration and genuine care for these characters. Natasha Jenkins' hyper-naturalistic set and costume design provide the cast with an exact replica of what so many community centres and local communities now look like through consistent neglect.

Simply put, this show is a shock to the system. And it should be.