Like an Impressionist painting in music, Debussy's Pelléas et Mélisande tells the story of a forbidden love

Pelléas et Mélisande will be staged in a new production by Glyndebourne Festival Opera, where Debussy's only opera was last directed by the innovative Graham Vick. Nearly 20 years on, Glyndebourne offers a whole new immersion into the French composer's unique soundworld, as the German director Stefan Herheim makes his Glyndebourne debut, with Philipp Fürhofer as designer.

Leading the cast is the fine British baritone Christopher Purves, a terrific actor as well as singer, as Golaud. 'This is one of the greatest scores ever written,' says Purves, whose character is tormented by thoughts that his Mélisande may have been unfaithful to him. 'He is crippled and destroyed by insecurity and jealousy and he will do everything he can do to get to the truth.'

Robin Ticciati conducts the London Philharmonic Orchestra and Glyndebourne Festival Chorus in this mesmerising musical drama. The score has been compared to the suggestive and atmospheric paintings of the Impressionists.

‘Forget you are singers,’ Debussy told his original cast in 1902. One could add, forget you are at an opera: this is not only the most crystal-clear music in a host of colours, but also pure theatre.

Pelléas et Mélisande is sung in French with English surtitles. Booking opens at 6pm on Sunday 4 March.
by Claudia Pritchard 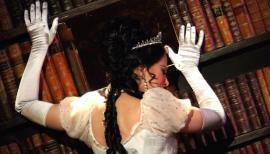 Five Opera Heroines: hear the world's best sopranos sing their hearts out
Sign up to CW’s newsletter
By entering my email I agree to the CultureWhisper Privacy Policy (we won`t share data & you can unsubscribe anytime).