At the Theatre in the Woods, a suitably rural drama unfolds, and the audience is at the heart of the action

So it's not only an operatic production that's on test here, but the venue itself. And let's start with that little miracle. Grange Park Opera has a long history elsewhere, but now housed only 20 miles or so outside London on the estate inherited by TV presenter Bamber Gascoigne, it has started a new life in a new home. Behind an elegant red-brick mansion surrounded by a chequerboard of enchanting, room-like gardens, the 650-seater conceived by David Lloyd Jones and Tim Ronalds Architects, is still raw – brise blocks and chipboard are the materials on view. But the stuff that matters – the acoustics, the sightlines, the comfort – have rightly taken priority, and all are terrific.

With time, with money – and donors will certainly be able to see where their money goes – the Theatre in the Woods will be prettied-up, but everything is already here for an excellent summer's night at the opera, even down to the nooks and crannies and herbaceous borders for picnics in the long interval.

Janáček's Jenufa is a piece on exactly the right scale for this debut season. The cascading river, the turning mill wheel, the tumbling grain, all churn beneath the tightly-buttoned and unleashed passions of the mill owner, his staff and family. As reckless, fun-loving Števa, the wonderful tenor Nicky Spence is reprising the enormous hit he had with this role at English National Opera, and with his jealous half-brother Laca again, as at ENO, brilliantly sung with bitterness and remorse by Peter Hoare. 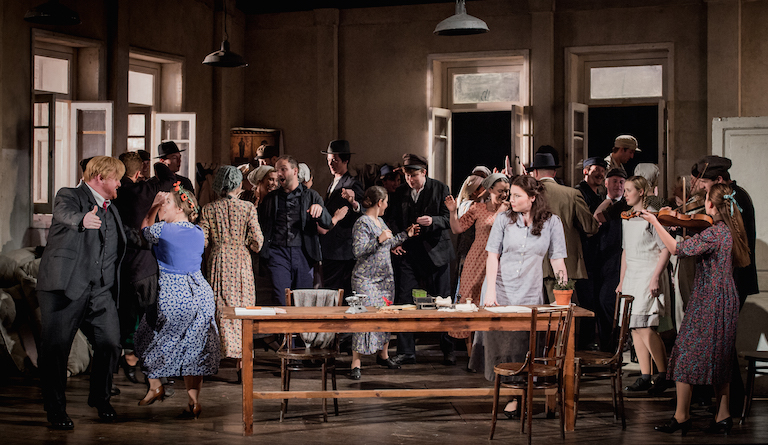 In this Welsh National Opera production by Katie Mitchell, revival director Robin Tebbutt, with designs by Vicki Mortimer, the miniature nature of the new opera house helps emphasis the claustrophobia of this small, simple, rural community, the lack of privacy, absence of comfort and austere rules. It also gets to the heart of a woman conflicted by expectations for her daughter, who is compromised by the secret birth of a baby, and her moral code as a church official.

Susan Bullock as the Kostelnička has to create, therefore, one of the most complex wome in opera – one who can kill a child and yet persuade us that she is justified in her role as the young mother's protector. The natural warmth of the very excellent BBC Concert Orchestra under William Lacey supports this more sympathetic interpretation of an often more alarming character.

In the title role, Natalya Romaniw, who was 2016's Tatyana in Eugene Onegin at Garsington and Liza in Opera Holland Park's Queen of Spades. The prospect of seeing her as Jenfua – damaged emotionally by Steva, physically by Laca – was very enticing, and although she lost the fluidity of her line a little in the second act, her natural gift is to speak in song, at ease with Janacek's conversational rhythms. The chattering, crowding chorus, a marvellous sight and sound, have their own repeated refrains.

This is an exceptional evening at so many levels, and a chance to be on the first page of a new chapter in the history of opera in Britain. Highly recommended.

Royal Opera House 2017/18: curtain up on a whole world of emotions
Sign up to CW’s newsletter
By entering my email I agree to the CultureWhisper Privacy Policy (we won`t share data & you can unsubscribe anytime).