Welcome return to the Coliseum of Anthony Minghella's production of Puccini's tragedy. A young Japanese woman falls for an American officer, but their marriage is doomed

Puccini's opera does not necessarily lend itself to such ravishing visual effects. The story of a young, impoverished Japanese girl who marries a chancer from the US navel officer who docks in Nagasaki does not end well. She takes the alliance seriously; he regards it as a monthly contract that can be closed at any time. When he sails away for three years, the bride waits patiently, with their baby, but his return is not the joyous reunion she has dreamed of.

With sliding panels illustrating the fragility of the bride and the marriage, blood red signalling a violent end and bunraku puppetry demonstrating manipulation, this Madam Butterfly is shot through with double meanings. And yet, it is a feast for the eyes, the often cinematic lighting of Peter Mumford and set design by Michael Levine with its lacquered shine enhancing breathtaking costumes by Han Feng that will have you racing to the Victoria and Albert Museum's new Kimono show. 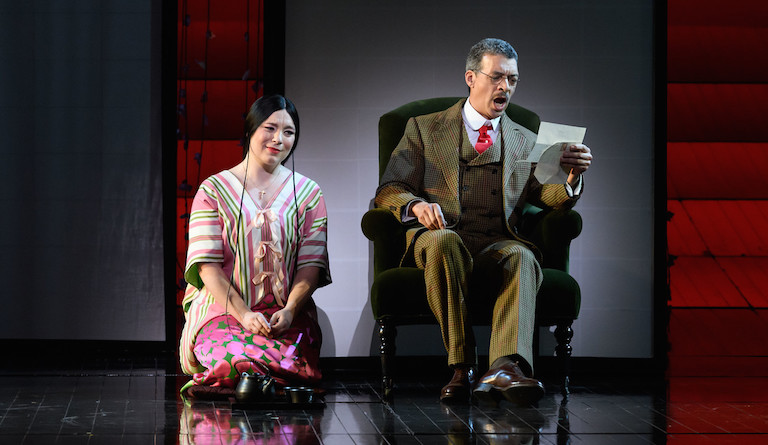 Having seen that exhibition hours before the performance, I understood better than ever the ceremonial significance of the robes that are an important element in the storytelling of Madam Butterfly. Exhibition+opera – that's a perfect day in London.

In the title role, as Cio-Cio San, known as Butterfly, the superb British soprano Natalya Romaniw adds another role to her ever-growing repertoire. From the outset, a melancholy and solemnity in her interpretation illustrates the 15-year-old's sad backstory: she was well-born, but the family fell on hard times and she made ends meet by singing for men. So there is no giddy girl in Act One, but a young woman already scarred by levels of male abuse.

That she trusts lightweight Lieutenant Benjamin Franklin Pinkerton from the naval ship Lincoln, therefore, is doubly heartbreaking. In Act Two, Romaniw's dignified pain and heatfelt belief is even more apparent, as the long wait stretches on, her aria imagining the bright future magnificently sung, and its pathos heightened by the arrival of the toddler. Blind Summit Puppetry creates this remarkable little boy.

Butterfly's adoration of Pinkerton is rendered even more pathetic by US tenor Dimitri Pittas's cold and lumpen Pinkerton, his singing just a little reckless, like the man. Her consolation is her loyal and knowing companion Suzuki, warmly and wisely sung by Stephanie Windsor-Lewis. Baritone Roderick Williams sings Sharpless, the weak American consul and adviser to Pinkerton, as a man whose essential kindness is a barrier to decisive action. 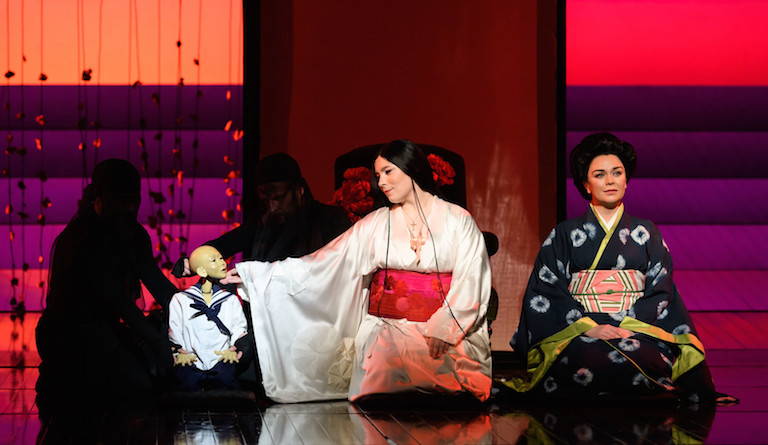 As ever the Chorus of English National Opera floods the stage with life. Choreography by Minghella's widow Carolyn Choa draws on traditional Japanese movement. Martyn Brabbins conducting brought out the darkest undertones in the score.

Minghella had already scored a big hit with the visually striking and unashamedly romantic The English Patient in 1996 when he began work on Puccini's opera. It shows.

Only the audience fell down on its job on first night. Curtain calls are for the creatives, not the characters. If you boo the singer who plays Pinkerton – because you don't like Pinkerton – why are you cheering the singer whose character kills herself? These performers have worked their socks off and they deserve only praise. This opera trolling must stop.

Madam Butterfly is sung in English with English surtitles. It is a co-production with the Metropolitan Opera, New York and Lithuanian National Opera. Further performances at the Coliseum are on 29 Feb; 5, 7, 11, 13,20, 27, 30 March; 4, 7, 14 April. There is a pre-performance talk on 11 March
by Claudia Pritchard