A new exhibition explores the sartorial, aesthetic and social significance of the kimono from the 1660s to the present day

In the meantime, the exhibition – a love letter to the dedicated conservators and archivists of the V&A as much as a study of Japanese dress – has been transformed into a virtual proposition. 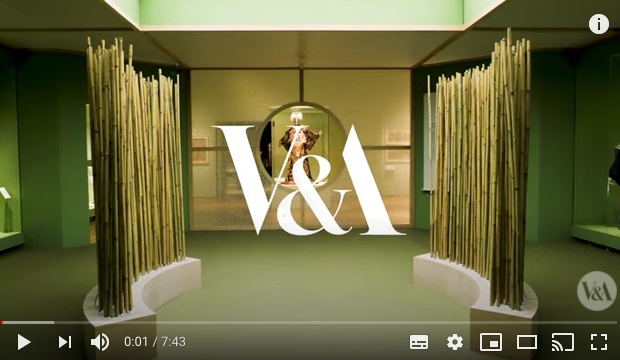 Five episodes – each less than 10 minutes long and led by curator Anna Jackson, keeper of the Asian Department – walk visitors through the five sections of the exhibition, thus providing a chance to experience the exhibition virtually, enjoy a little escapism and remember just how vital a role organisations such as the V&A play in making London a cultural destination like no other.

Read on for the Culture Whisper review of the original exhibition, click here for the first episode of the virtual tour, and, if you can afford to donate the price of admission (or more), learn how you can support the V&A's work here.

Fashion talks. That’s a statement as true of today’s Dior slogan T-shirts as it is of a 500-year-old kimono, which visually conveyed the age, status, education and cultural currency of its wearer through cut and decoration.

In the modern west, kimono is seen as a traditional form of dress: an artefact of near-forgotten ritual, frozen in time. This is a misunderstanding, one that the V&A looks to correct with its first exhibition of 2020: Kimono: Kyoto to Couture, cannily timed to coincide with the Summer Olympics being held in Tokyo. 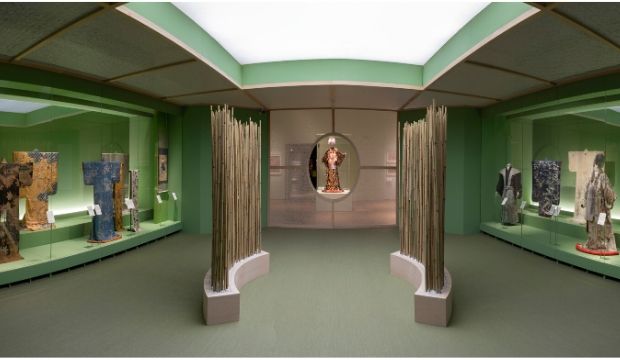 As well as showcasing some truly beautiful examples of traditional textile crafts, the exhibition is something of a love letter to the conservators and archivists of the V&A, the dedicated staff who toil behind the scenes carefully acquiring, documenting and preserving the many thousands of artefacts that are part of the museum’s archives and the country’s cultural heritage.

There is a popular misapprehension that the word kimono refers to a specific style of robe tied with a belt (obi), when in fact it translates as ‘the thing to wear’, essentially clothing. In its best-known form it came about during the Heian period (794-1192) when kimono-makers began to sew together straight strips of fabric of varying widths in order to create a garment that skimmed the body beneath. By the Edo period (1615-1868) kimonos were worn by all, but the gender, age and status of the wearer determined certain style characteristics. 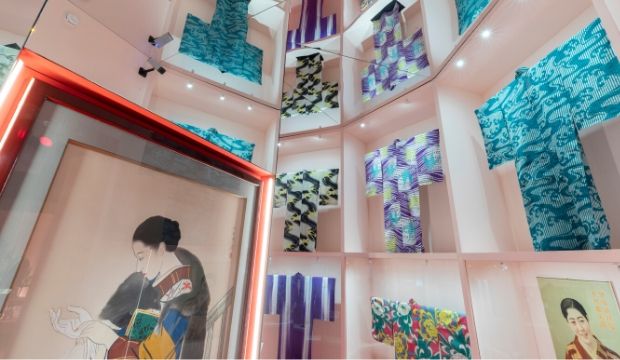 To walk through the exhibition is to experience a near-linear history of the last five centuries of the kimono, charting its role domestically, its later importance as an export and even the impact of imported fabrics and dyeing techniques. Within this structure there is fluidity too, especially when it comes to the link between kimono and costume for theatre and film, and the influence of cultural cross-pollination.

At a time when an increasingly global fashion industry often comes under criticism for cultural appropriation, the exhibition presents this flow back and forth as a good thing, allowing for innovation and inspiration on both sides. It doesn't, however, go into the nitty-gritty of fast-fashion knock-offs or explore the line between appropriation and appreciation.

There are plentiful examples of the latter from great European couturiers including Vionnet, Paul Poiret, Lanvin and Mariano Fortuny, who reshaped early 20th-century fashion, inspired by the cut and drape of kimono. 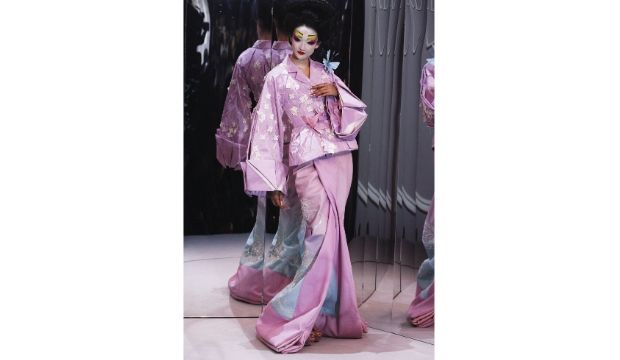 The wide-reaching influence of the kimono is communicated immediately in a display which shows an 18th-century kimono alongside a 20th-century couture creation by John Galliano for Dior. Christian Dior, Haute Couture Spring-Summer 2007 © Getty Images

Elements of Japanese interior culture have been incorporated into the staging: bamboo screens shape the flow, brightly coloured stones are raked to mimic the meditative patterns of a Zen garden (these are glued in place to avoid disturbance by visitors), an artificial purple bonsai tree provides a focal point.

Thankfully, they are used sparingly, lest they distract from the intricacies of the exhibited works, which are truly worthy of up-close inspection for the way they are embroidered, painted, dyed and woven using traditional techniques and crafts. 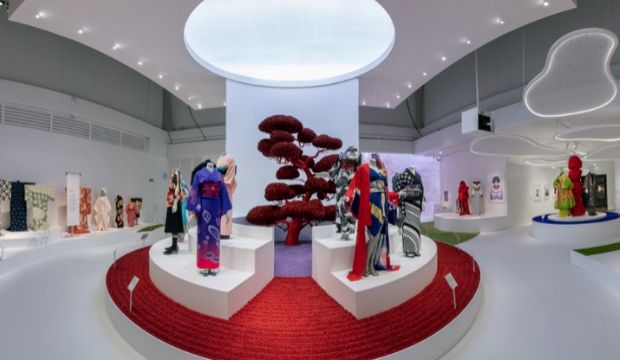 The older and most precious artefacts are presented in glass cases, but the final room – dedicated to post-war designs from Japan and elsewhere – has a much brighter and more open aspect

Fashion exhibitions have increasingly become blockbuster events, especially in the hands of the skilled curatorial team of the V&A. Riding high on recent successes such as Christian Dior: Designer of Dreams and Mary Quant it's good to see the team bring the focus to something a little more esoteric than household names. It is a credit to Anna Jackson, keeper of the Asian Department and curator of the exhibition, that the treasures found within are accessible, their significance easy to understand.

That's no mean feat. We have become so disconnected from the industrial processes that yield the clothes we buy – the cotton farming, the yarn spinning, the fabric weaving, printing and dyeing, the pattern cutting and construction. As such, it’s humbling to see the ancient techniques and handicrafts that went into some of these centuries-old pieces preserved and celebrated. As rebukes to fast fashion go, few can compare to the historic yet ever-fluid kimono.

That fluidity is important: the kimono has not been preserved in aspic, and although it came close to extinction after World War II and the Allied Occupation it has enjoyed a renaissance in recent years. To close the exhibition are ensembles from contemporary designers who marry a fashion interpretation with historic influence, proving that a kimono is still ‘the thing to wear’.

The exhibition has been supported by MUFG, GRoW @ Annenberg, Shiseido and Yoshikimono.