TRY CULTURE WHISPER
Receive free tickets & insider tips to unlock the best of London — direct to your inbox
The four-part police thriller on BBC Two stars Hollywood heroine Carey Mulligan as its leading lady (she comes full circle since appearing in Doctor Who in 2007), Billie Piper (also a famous Doctor Who veteran) and Hayley Squires, (who shone in I, Daniel Blake.) Perhaps you will have noticed it this time: they're all women.

Yawn, lots of women – what's so exciting about that? Haven't you heard, we're all bored of the #metoo campaign now. No one cares about female empowerment any more. Move on.

Well, last year, the broadcasting corporation produced a series of first-class female lead dramas – from Apple Tree Yard toThe Replacement – and the fact that these shows had women at the helm stood out like a sad and it's-disappointing-that-it's-so-noticeable thumb. The lead character's femininity was always an important part of the stories: grieving mother, jealous co-worker, cheating wife.

But, in his intricately woven script, Oscar nominee and playwright David Hare gives us a cast of characters whose gender is the least interesting thing about them. These people might as easily have been played by men. It's so subtle and refreshing, we actually have room to talk about something else. You see – everyone gets their way.

Mulligan plays cop DI Kip Glaspie (she's pregnant, but don't panic, it's only because Mulligan was pregnant at the time, there's nothing to see here), who attempts to investigate the apparently random murder of an illegal immigrant and pizza delivery boy.

The only witness to the crime is Linh, played by Kae Alexander, another one-time illegal immigrant, who was on a lot of drugs. There's Billie Piper's Karen, an out of control single mother with a dissenting daughter (OK, maybe Karen is specifically a woman). Karen ordered the pizza that lead to the murder.

Karen's ex-husband is a Labour MP, David Mars played by token man John Simm, and his ex-girlfriend is the gay vicar Jane, played by Nicola Walker, and who by some extraordinary twist of fate is dating Linh.

Glaspie's investigation leads her to the 'home' of two Syrian immigrants – relations to the murdered pizza delivery boy – who are found shivering in an unused garage. Controlled and serious though Glaspie is, she can't help but be unsettled by the situation these two women find themselves in: 'escape war, make your way to England and start your new life in a garage. That's the best we can offer, is it?' she asks.

Trading trust and information in exchange for some kind of help, is one of the many avenues Glaspie goes down whilst she hunts for dark truth lurking behind the dead pizza boy and refugee.

Sparking conversation about migration, war and poverty, there's plenty to talk about in this excellent drama – which is already being hailed as the new Line of Duty. You know what you won't be talking about? The fact that nearly everyone important is a woman. Welcome to a brave new world. 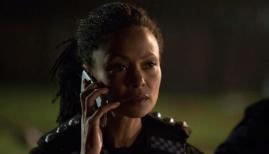 Line of Duty, season four on BBC One