A.A. Milne chronicled the adventures his son, Christopher Robin, went on with his lively toys. E.H. Shepard signed on to illustrate Milne’s first book of Pooh poems, When We Were Very Young, and together, the pair crafted a classic.

The exhibition unfolds like a pop-up book, with secret slides and unexpected, child-sized doors appearing alongside the display cases. Each room is a stunning interpretation of Shepard’s illustrations, complete with storytelling trees and a picnic drawing table. 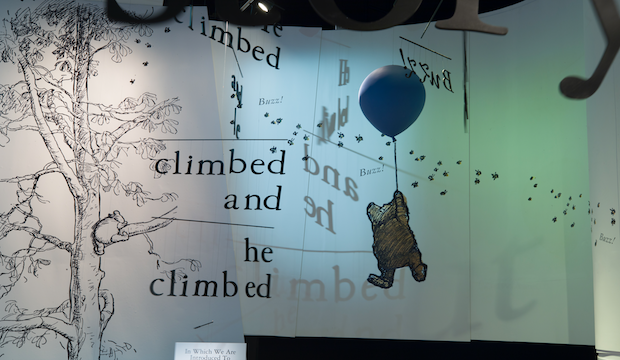 The gallery space, designed by RFK architects and Tom Piper (the artist behind the field of poppies at the Tower of London), is sure to entrance everyone from age two to 102.

In the first part of the exhibition, the legacy of Winnie the Pooh on popular culture is explored through objects exhibited in a glass vitrine. We see stuffed toys depicting Pooh in all shapes and sizes. A Christopher Robin tea set previously owned by Princess Elizabeth is on display. Books like The Tao of Pooh and Pooh’s Workout Book showcase the extensive career of a bear who loves to just do nothing.

We journey through to ‘the Nursery’, a room designed to resemble that of Milne’s son. Pictures from Milne’s family photo album line the walls: one shows the real Christopher Robin with the real Winnie – a bear at the London zoo. 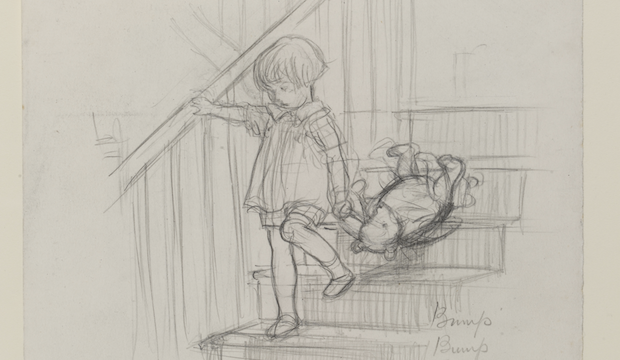 But the real draw is the extensive collection of sketches on display in the expansive main exhibition gallery. Children can curl up in Eeyore’s rickety stick house before perusing Shepherd's preliminary drawings. After appreciating the pencil sketch and pen and ink drawings of ‘Poohsticks’, cross the bridge and play your own game in the digital river.

Exploring the real-life friendship shared by A.A. Milne and E.H. Shepard, Winnie the Pooh: Exploring a Classic traces the creative collaboration that continues to capture the public's imagination.

Almost 90 years since the publication of their first book, their symbiosis is explored through the pair’s sketches, drafts, and correspondence. Milne insisted Shepard base his illustrations on his son’s toys, as their shapes inspired his writing. A sketch of a map of the 100 Akre Wood (based on the real-life Ashdown Forest) highlights the painstaking attention to detail and the depths of their artistic alliance. From Milne’s manuscripts to Shepherd’s sketchbooks, the exhibition shows the ‘interplay between text and image’, highlighting how the pair transformed a toy into a classic character.

Prepare for your inner child to be amazed as you embark on an adventure through the world of Britain’s beloved bear. 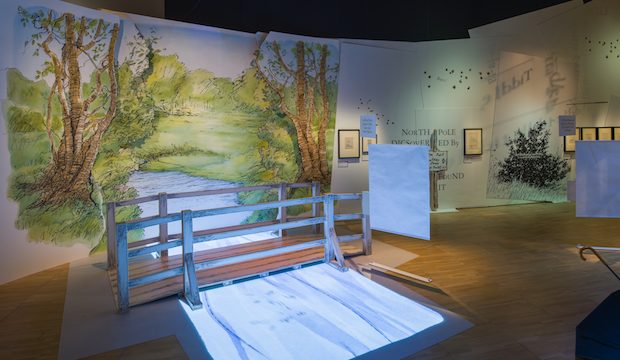 Best things to do with kids in London: July edition
Sign up to CW’s newsletter
By entering my email I agree to the CultureWhisper Privacy Policy (we won`t share data & you can unsubscribe anytime).
7