Based on a 19th century Italian satire, the story of a wooden puppet who longs to be a real boy is steeped in morality. Yes, there’s an abundance of magic and fantastical feats, but each is concerned with enforcing a message: the fickle nature of fame, the perils of pleasure, the relationship between love and suffering.

The narrative arc of learning to follow conscience over desire has a tendency to feel preachy and does not always lend itself to pacy entertainment or poignant self-discovery. It’s not the subtlest of messages and there are flatter sections where you feel a bit battered by the message, but there’s enough song, dance and spectacle to entertain.

Musical director Martin Lowe’s new arrangements of the Oscar-winning Disney songs ‘I’ve Got No Strings’, ‘Give A Little Whistle’ and 'When you Wish Upon a Star' propel the show, with vibrant ensemble dance numbers. Joe Idris-Roberts makes a lively, convincingly capricious Pinocchio, while Audrey Brisson as the voice and co-puppeteer of Jiminy Cricket is a squawky, squeaky touch of humour and favourite with the kids. 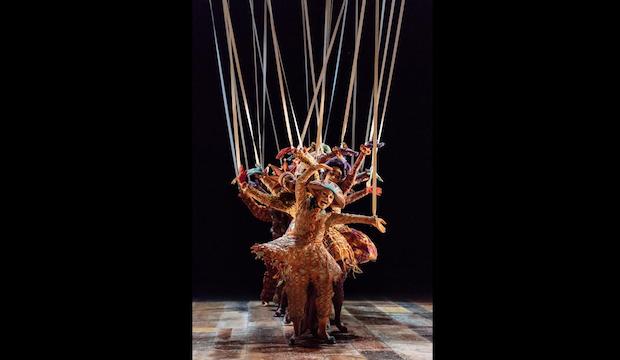 But it’s the visuals that really dominate this show, as extending noses, donkey-children and giant whales come to life with wow-factor. Bob Crowley’s designs ripple with silliness to reel in children and have a resounding old fashioned charm for the parents.

In a thoughtful inversion between man and marionette and a surreal subversion of scale, the puppets and children in this production are human-sized, played by fully grown adults. And the grown-up characters are towering 15 foot puppets, created by Toby Olié with over-sized cartoonish heads and eyes that glitter with life. While giant Gepetto (voiced by Mark Hadfield) cuts a kindly figure, with slumped shoulders and worry lines etched into his wooden face, Stromboli and the Coach-driver have a nightmarish intensity (though this adult critic was notably more spooked than the surrounding children).

Aside from some shrewd quips about the dangers of gluten, Dennis Kelly keeps the story rooted in a timeless, fairy-tale abstraction. This allegorical inhumanity limits the show’s capacity for a warm and fuzzy happy tears. It will wow you, but it’s unlikely to really move you. But Pinocchio on stage is thought-provoking enough and it’s a pertinent reminder for all ages of the importance of heeding and nurturing to that little voice telling us to do the right thing.

Recommended for brave eight year olds and up. 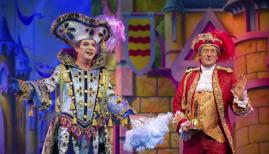 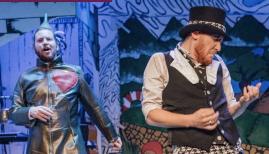 Scrooge and the Seven Dwarves, Theatre503