In Four Quartets, a show like no other currently at the Barbican, the American choreographer Pam Tanowitz creates a miraculous blend of poetry, dance, visual arts and music

It prefigures the most extraordinary marriage of visual art, poetry, dance and music in a piece that is quintessentially New York, where it was created and premiered in 2018, yet reaches well beyond.

TS Eliot’s Four Quartets are read in their entirety by the award-winning veteran American actress Kathleen Chalfant (The Americans, House of Cards) from a desk placed below the stage next to a string quartet. Nine dancers perform in front and around of a series of Brice Marden panels, at times interacting with them. 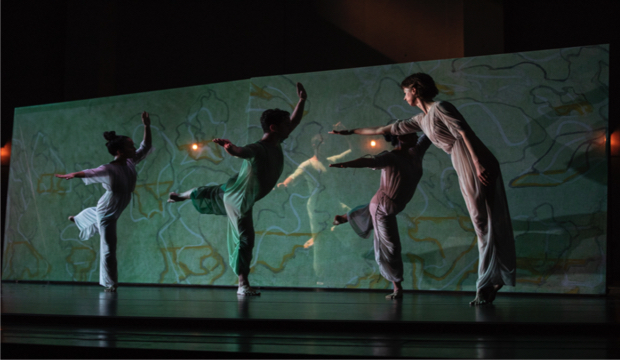 Four Quartets, Dry Salvages, iomage Maria Baranova
If you know TS Eliot's masterpiece, Four Quartets, you might wonder how anybody would dare translate it into dance; but, of course, there’s no such attempt on the part of choreographer Pam Tanowitz. Instead, she draws on TS Eliot’s acknowledged fascination with dance, which he instilled into the poems, for example, ‘… Except for the point, the still point,/There would be no dance, and there is only the dance.’

Time, timelessness, history, memory combine into a motif that runs like a thread through TS Eliot’s Four Quartets, and you could use a verse from the poem to describe the dance Pam Tanowitz appends to the poems: ‘… a pattern of timeless moments.’

Tanowitz’s choreography draws on the classical vocabulary, but treats it in a post-modern way. You can detect the influence of Isadora Duncan's pioneering free flowing dance, as well as of 20th century makers of modern dance such as Martha Graham and Merce Cunningham, the latter particularly in the separation between movement, on the one hand, and music and sound on the other.

Pam Tanowitz’s work, though, has a freshness and rigour all its own. As Kathleen Chalfant recites the opening of Burnt Norton, the first poem in Four Quartets, the stage gradually lights up, Marden’s cloth becomes translucent and we discern a barefoot dancer dressed in gauzy overalls (costume design Reid Bartelme and Harriet Jung).

She dances, her movements creating that ‘pattern of timeless moments’ that goes on to characterise the whole work, whether in ensemble pieces, solos, duets or trios. Dance flows like time, allowing for the odd moment of near stillness – a tilted arabesque just held, a tableau of figures with hands clasped above their heads – before it picks up again, skipping, hopping, nervy yet totally controlled. 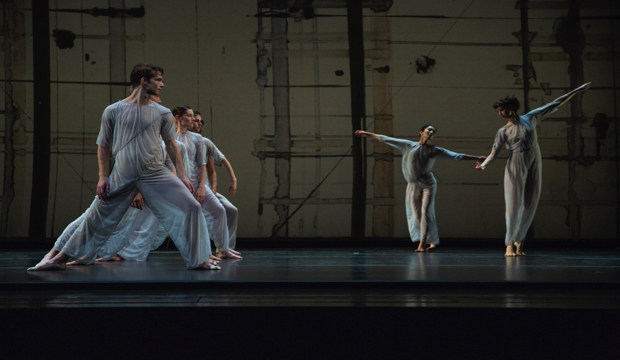 Four Quartets, Little Gidding, image Maria Baranova
Sometimes the words stop, and dance goes on in its own universe; at others, the words sear themselves into your consciousness with preternatural clarity almost overtaking everything else; at other points still, the poems act like an incantation transporting you to another plane and another dance.

Kaija Saariaho’s score joins in with a few liquid harp chords after the first two sections, remarkable in its ability to blend harmoniously with words and dance without ever drawing attention to itself. And Clifton Taylor’s lighting design is a marvel of skilful and self-effacing effectiveness. 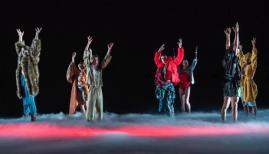 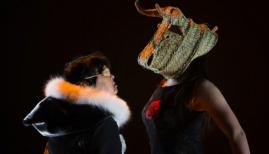