Visually it’s often arresting. The blend of digital projections to furnish scenes where only a minimum of props are feasible, makes good use of the RAH’s victorian splendour, in particular in the famed Act II ball scene; the costumes and wigs are sumptuous; the company corps de ballet are on top form negotiating exacting dancing in-the-round, as well as numerous entrances and exits up up and down the stalls aisles, with ease and aplomb.

In the second cast, Joseph Caley is a laddish, rather engaging Prince, not particularly regal in his demeanour, but nevertheless a credible lover in his ever more besotted duets with Erina Takahashi’s demure Cinderella. They are a well-matched pair.

Barry Drummond stands out as the Prince’s boisterous childhood friend and companion, Benjamin, his dancing clean and effortless with explosive jumps and neat landings, all crowned with an irresistible grin.

There are some amusing comic turns from the silly, rather than evil, trio of Stepmother (Sarah Kundi) and Stepsisters (Alison McWhinney and Anjuli Hudson).

And there is, of course, Prokofiev's gorgeous score, cogently played by the English National Ballet Philharmonic, under conductor Gavin Sutherland.

That said, structurally this Cinderella-in-the-round has serious flaws. For one thing, whereas ENB’s previous in-the-round productions, Swan Lake and Romeo and Juliet, have many crowd scenes that fill that vast arena to dazzling effect, Cinderella has just one central crowd scene – the Palace ball in Act II.

Most of the rest are intimate scenes involving a small number of characters, for example in the Cinderella household with a fairly static father, hyperactive Stepmother, Ugly Sisters (here clumsy rather than ugly) and the much put upon Cinderella.

These characters are dwarfed by the huge space around them; and the first encounter at the hearth between Cinderella in rags and the Prince, disguised as a beggar, is practically lost in a dark corner of the stage.

In their final, glorious love pas de deux Cinderella and her Prince alone on a stage devoid of other people or props are practically eaten up by the oppressive space; a pity, because Wheeldon’s flowing, impeccably classical choreography is sublimely expressive.

Also, bearing in mind the target audience of tiny tots, there is a lot of exposition before any dancing of substance actually takes place. We see the child Cinderella, just as her loving mother dies; the child Prince and Benjamin cavorting in the Palace (four imposing arches wheeled on and off stage as required) for no particular reason; Cinderella’s father’s new marriage, and so on.

It’s not really until the pre-ball transformation scene in a forest full of weird and wonderful animals (no Fairy Godmother in Wheeldon’s Cinderella), when the stage is flooded with groups of dancers in extravagantly bright costumes signifying the seasons, that finally some satisfying dancing takes place, and the company go at it with gusto.

It’s not the ideal ballet for an in-the-round treatment; however, ENB’s and Christopher Wheeldon’s Cinderella’s narrative is crystal clear, which will please the little ones, and boasts some exciting dancing for the grown ups' pleasure and delectation.

On the comic turns that too often cross the line into cringe-making farce, we shall pass no comment… 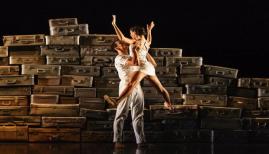 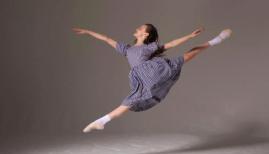