First seen in 2012, Lyric Pieces, provides an opportunity to luxuriate in the fine quality of movement from these technically assured dancers. They flow easily through the intricate choreography, while black folding paper props are manipulated by the ensemble in manoeuvres just about labour intensive enough not to be distracting.

The black concertinas are used creatively as walls, bridges and hiding places. The wittiest use of this backdrop is when four dancers mimic piano keys, which jump to attention as they are conducted by a dancer who takes centre stage.

The many transitions are smooth and Jessica Lang’s choreography is crisp, carefully drilled and well placed. Maureya Lebowitz is perky and commanding in the cheerful March of the Trolls segment while Tzu-Chao Chou cuts a vulnerable figure in the solitary In Ballad Style that sees him alienated from the main ensemble. 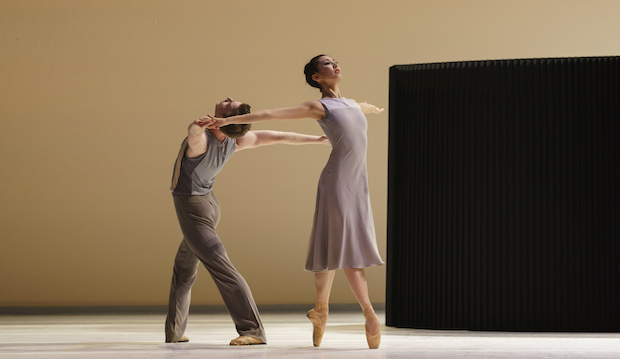 Offering some contrast, two driving narrative pieces follow. Choreographer Didy Veldman turns her attention to the pressures of modern society in new commission A Sense of Time. It’s a restless, stirring creation that builds effectively with Veldman’s skill for pace and structure. There a high sense of freneticism made all the more ravishing by the moody orchestral score interspersed with electronic accompaniment.

Breathless opening scenes are contrasted with a strangely peaceful pas de deux danced by Céline Gittens and Brandon Lawrence. The pair share an accomplished partnership, before a final crescendo of activity from the ensemble that sees them driven to exhaustion.

A wall of bulky suitcases is used inventively. As individual cases are removed, the construction functions as a climbing frame, hiding place and device to emerge from which to emerge.

Just as the audience are crying out for a little fun and colour, up comes Ruth Brill’s Peter and the Wolf, a work fusing classical, contemporary and urban style together, bringing the programme to a joyful conclusion.

Laura Day is unflappable and fearless as Peter. Eye-catching too is Samara Downs who steals attention with her slinky blank cat, back arched and eyes wide and she pads the stage with her dainty pointe shoes.

Much like the My First … series from English National Ballet School, there is an unseen narrator which will be helpful for youngsters. However Brill has not dumbed down the choreography, allowing the strength of characterisation and variety of instruments from the orchestra to convey the story too.

Offering versatility in style pace and tone, (Un)Leased is danced with confidence by the excitingly bright dancers of the company. It’s an enjoyable evening, thoughtfully paced and delivered with finesse.

BRB’s second programme brings a welcome opportunity to see one of David Bintley’s best loved works, Hobson’s Choice. Bintley is reaching the end of his near quarter of a century as BRB artistic director, during which time he has also continued to choreograph extensively.

Although not all of David Bintley’s works have been well received, Hobson’s Choice is definitely rated as a success. A comedy based on a play by Harold Brighthouse, the title is at the origin of the expression which, in reality, means no choice at all.

Set in 19th century Salford, Hobson’s Choice tells the story of the hapless drink-loving shoemaker Hobson, his three daughters, particularly the headstrong Maggie, and his underpaid bootmaker, Will Mossop.


Hobson’s Choice has a score by Paul Reade, which will be played live by Royal Ballet Sinfonia and is influenced by music hall, opera and brass bands; and is definitely a fun, feel-good work, a fitting goodbye to David Bintley.

Peter and the Wolf