Birmingham Royal Ballet’s Fire and Fury, the first of two programmes in its autumn visit to Sadler’s Wells, is inspired by France’s Louis XIV and a painting by Turner

BRB Fire and Fury Review 3 BRB Fire and Fury Review Teresa Guerreiro
The first ballet of BRB’s Fire and Fury programme bears the signature of the company’s long-standing Artistic Director, David Bintley. An homage to France’s Sun King, Louis XIV, who is widely regarded as the founder of ballet, Bintley’s work is called The King Dances and is based on Le Ballet de la Nuit, an extended 1653 court performance featuring Louis himself as the Sun God, Apollo.

Le Ballet de la Nuit ran for some 12 hours; Bintley’s homage runs for a mere 40 minutes, divided into four sections, or Watches, in which the choreographer seeks to recreate the courtly dances of 17th century France and follow the development of male dancing over the years.

Lit by torches and candelabra in Katrina Lindsay’s atmospheric designs, the ballet spans the course of one night. The all-male ensemble dance Bintley’s choreography with a commanding authority, with the gentle leaps, travelling turns and abrupt stamps that cause their overcoats to flare upwards. 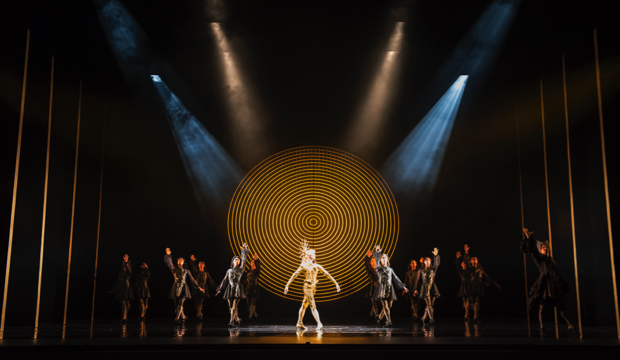 BRB, The King Dances, photo c/o BRB
The Second Watch, introduces the only female dancer in this work, representing Selene, The Moon, danced on opening night by Yijing Zhan. She joins the Sun King (Max Maslen) in a delicate pas de deux, danced with great, almost clinical, care. Zhang exudes calm and poise, the coldness of the Moon soothing the Sun’s youthful passion. The perfect balance they execute in the challenging lifts and holds is impressive.

The King Dances is undoubtedly intelligently created and packed with subtle details, but an understanding of the history at its root is vital to appreciate it. Those who enjoy their dance requiring a little less homework will find it heavy going; and Stephen Montague's uninspiring score, a mix of period pastiche and modern composition, doesn't help.

However, the spectacular sight of Louis, emerging from the back of the stage in his magnificent golden costume as the Sun God, Apollo, welcoming a new day, does at least make for a memorable closing image.

The second piece of the programme is Juanjo Arqués Ignite, inspired by William Turner’s painting The Burning of the Houses of Lords and Commons. This is not, however, a narrative work, but rather a free and impressionist approach to the event portrayed and the manner of its depiction. 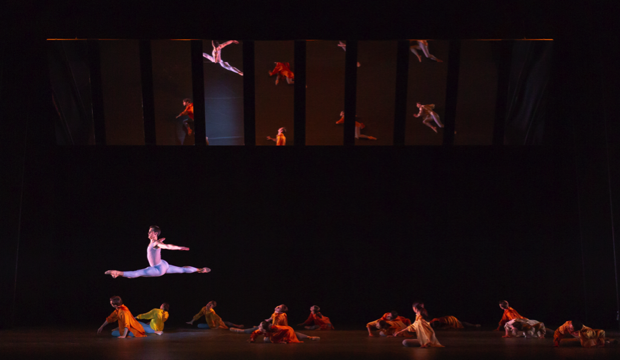 BRB, Juanjo Arqués Ignite, photo c/o BRB
Tatyana van Walsum’s designs are simple but beautiful. The stage is bare but for an overhead panel of mirrors which serves to magnify the freneticism and chaos of the fire. The dancers wear ash grey costumes with loose silk shirts providing burst of reds, orange and yellows. They invade the stage with a rampant physicality before disappearing again, their energy enhanced by Kate Whitley’s turbulent score.

Delia Mathews and Mathias Dingman make for a striking partnership as River and Sky. Mathews brings a wonderful control to the demanding lifts and jumps of the pas de deux, as well as neat and precise chaîné turns, bringing clarity among the disorder. Afterwards, she stands, back to the audience, a witness to the unfolding events, still exuding calm as the ensemble engulf her in their flickering flame-red shirts.

Ignite is perhaps weakest in its conclusion, which sees the dancers come to the front of the stage, each dropping their shirts before slowly backing away to the accompaniment of a crackling fire. Arqués’ work is not perfect but it is certainly accessible and makes for enjoyable viewing .