Ava Dance Company No Woman’s Land is an exploration of cross-cultural experiences that introduces the audience to an improbable star, but has serious structural flaws

Full marks for originality: when did you last see a Majorcan woman share the stage with a Canadian Inuit elder in search of mutual understanding?

Full marks, too, for bringing us more than a glimpse into the culture of the Inuit people of Arctic Canada, in the person of the extraordinarily engaging Inuit elder, Naulaq LeDrew, who stars with Avatâra Ayuso in No Woman’s Land.

A small woman (height 135 cms), with a serene countenance occasionally lit up by humour and mischief, 57-year-old Naulaq LeDrew is a revelation: as the work starts, she’s sitting on a bare stage cutting fish; and in her hands cutting fish somehow becomes the most fascinating and hypnotic activity in the world.

A little later, she addresses us in her Inuit language; and never mind that you can’t understand a word: her soft voice envelops you like a magical incantation.

Later still she bangs an Inuit frame drum, a qilaut, the word meaning ‘that by means of which the spirits are called up;’ and as she circles the stage with her qilaut, the rhythmic thud of the drum is a mix of mystical and rebellious, something whereby she asserts the value and dignity of her culture.

No Woman’s Land is the result of dancer and choreographer Avatâra Ayuso's sojourn in the Canadian Artic; part of her ongoing exploration of the commonalities between women of different cultures, which had already taken her to Burkina Faso, in West Africa.

Ayuso’s concept was to put side by side two women representing two generations (Ayuso is 37-years-old), two cultures and two countries; but both sharing experiences as women and migrants: Avatâra left her Mediterranean home to settle in the UK; the Inuit people’s own life and relationship with their environment was profoundly disrupted by colonisation, leading to painful dislocations, which persist to this day.

With sound design by Daniel Williams and Ayuso herself, dramaturgy by Ignacio Vleming and video by Beatte Oxenfart, No Woman’s Land juxtaposes and mingles images of the icy Arctic and the sunny Mediterranean.

Avatâra Ayuso is a very good, strong dancer and a creative choreographer whose restless mind constantly pushes her in all sorts of interesting directions, informed by her feminist approach to the role of women in society.

However, there is little dancing in No Woman’s Land, and certainly no arresting choreography. There’s a lot of talking, some rather loud screaming and no coherent narrative thread at all. Take away LeDrew and there’s very little left. The promise of No Woman’s Land was enticing; its realisation less so.

No Woman's Land is part of Border Crossings’ ORIGINS festival, which showcases the indigenous cultures of the world. 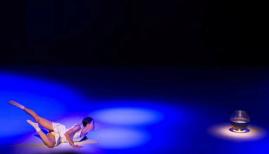